As a movie critic, I get invited to some cool events. IN 2019, there was a screening for Jojo Rabbit in Los Angeles. I wouldn’t normally drive the few hours north to L.A. but the idea of meeting Taika Waitit, and getting his autograph, was too good to pass up. Sure, he wrote/directed “Thor: Ragnarok” but it’s his two movies before that that I loved so much -- “What We Do in the Shadows,” which was a satire on a reality show, involving vampires. It was easily the funniest movie of the year, and one of my Top 5 movies of 2014. Waititi also did the movie “Hunt for the Wilderpeople” which is the worst title, but it was the year before, and it also made my Top 10 list. Find either of those movies, and thank me later. 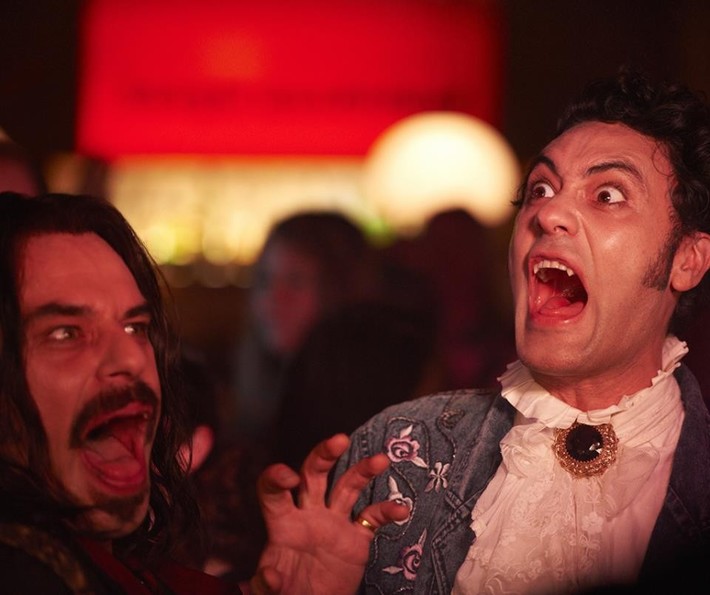 I thought about bringing the DVDs of those to have him autograph, but I instead found a photo from JoJo Rabbit online, had it put on a thumb drive, and took it to a FedEx/Kinkos place, and had them blow it up to 12 x 10. That would work also, since the kids in the cast were going to be there with him. Roman Griffin Davis, who ended up getting a Golden Globe nomination for Best Actor; and in the Critics’ Choice awards, which I’m a part of, we nominated him for best “young actor/actress, along with Archie Yates and Thomasin McKenzie, who blew us away in “Leave No Trace.” (although I wish the movie would have been better)

Jojo Rabbit has been nominated for a number of Oscars, including “best picture,” “best adapted screenplay,” and best “supporting actress” for Scarlett Johansson, which gives her two nominations (since she got a “best actress” nomination for “Marriage Story” which is also a great film).

After coming out of the screening, and going to where a delicious spread of food was (one of the perks about being a film critic -- you don’t have to spend $8 on a bag of popcorn, and at screenings like this, there are lots of meats, cheeses, and booze to consume). My eyes quickly turned from the spread of treats, to director Waititi standing by himself. I figured he’d be swamped by other critics within minutes, so I told him I liked the movie, and said “That was so cool that you ended the war [that’s not a spoiler alert, is it?] playing the Arthur Lee song ‘Everybody’s Gotta Live’. That was so cool.”

He told me he always wanted to use that song in a movie, and for years, he hoped nobody else would. We then talked a lot about the band “Love” before I went into telling him how incredible his other films were, and him using the song “You’re Dead” by Norma Tangega (who died a few weeks ago, at age 80).

Since he seemed a bit quiet, or perhaps I was overwhelming him by geeking out, I then asked him to sign my picture, which he did.

The problem I had after that was, my wife brought two glasses of red wine to the table, and some other food. I didn’t want my autographed photo to get all messed up, and I can be a slob when I eat. As I was scarfing down grub, there was a tap on my shoulder. A publicist asked if I’d like to meet Roman Griffin Davis. I turned around, and there he was. Such a cute smile, and very personable. I asked him how he was able to evoke such emotions during the film, and if he thought about a pet dying, or what. He said those techniques don’t work for him, because he tried. He just thought about the script (which Waititi is up for an Oscar for adapting). He then joked, “I should get an Oscar, right?” Before adding, “I’m kidding, I’m kidding.”

He signed my picture, and then I noticed...McKenzie at the table right next to mine. She was talking to a couple of critics about the movie. It seemed to be going on for about 20 minutes before they shook her hand and left. I promptly turned around and asked her to sign the photo. I asked her a quick question about the film, but I can’t remember now what it was. Now, the only thing that will drive me nuts is...I’m going to want to get Scarlett Johansson to sign this, and I doubt I’ll ever run into her. Sam Rockwell, who always turns out great work, will be tough to get.

A comedic actor I love, Stephen Merchant, had a small part. I’ll probably be able to get him at some point. I'll probably interview Rebel Wilson at some point, and have her sign it.

I’ll keep you posted on who I acquire. And, before the Oscars this Sunday, make sure you watch Jojo Rabbit. You’ll be glad you did.

Jojo Rabbit is incredible.  I hope that Taika Waititi wins for Adapted Screenplay.  Good luck adding Scarlett Johansson to the photo.  She is very elusive.

Loved that movie! You're living my dream life lol.

Yeah, I figure Johansson won't happen unless I interview her. And, the one problem I found was...I made the photo a little big, so it's hard to discretely carry it into interviews!