We’ve all seen athletes exchange jerseys after games. We’ve seen athletes give their shoes to fans, sometimes signing them. Well, with a few weeks to go before the Super Bowl (and boy is that going to be a good game with those two teams), I thought it was funny to see San Francisco 49ers tight end George Kittle wearing an autographed T-shirt into a press conference after the game. It was a T-shirt that showed quarterback Jimmy Garoppolo, without a shirt on. It was signed to him. He said he got the shirt earlier that week and was waiting for a big win in which to don it.

He said at the press conference that it was a special present that he gave to the QB, but the QB signed it and gave it back to him.

It reminded me of the time I sent an Ace Frehley (Kiss) album to David Letterman. I had written a handful of jokes over the years for the show, and when I was going through my albums one day (Frehley’s Comet), I noticed the drummer pictured on the back was Anton Fig, the drummer for Letterman, who he would also make fun of during the show. He was wearing the goofiest looking space suit. Something that made him look like he could be joining Donald Trump’s new “Space Force” (okay folks, let’s not get all political now). I put a note in it for Letterman that he could show the album and make fun of Fig. I’m sure he and Paul Schaffer were not even aware of him even being on that record. Well, two weeks later the album was sent back to me, signed by Fig. That was cool, but strange, as I didn’t ask for it to be signed. But hey...I’ll never turn down an autograph. I wish I would’ve had Paul sign my Spinal Tap CD, as that’s one of my favorite comedies ever.

Now, back to the story. 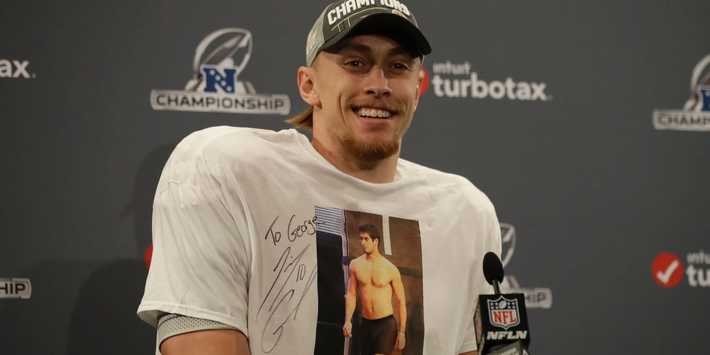 When asked about the shirt later, Garoppolo joked that it was a nice shirt and that perhaps the Niners team store would be selling it soon. I’m sure when Jimmy Kimmel sends his sidekick security guard Guillermo to the Super Bowl press conferences, he’ll be bringing shirts of all the guys shirtless.

Later, Kittle got a shirt with his own face and signed it for Garoppolo. I think after the Super Bowl, they should auction them off for charity. Perhaps have the entire team sign the back of them.

The game is February 2nd, and...I’ll be rooting for the Kansas City Chiefs. Mostly because their tight end Travis Kelce had a great season, which helped me come in second place in my fantasy football league. I’d gladly wear a shirt with him shirtless!

Their QB isn’t too shabby, either. I think he’s brought a lot of excitement to the game.