Completing The World According To Garp Autographs

It was a bummer to hear that comedy genius Buck Henry passed away recently, but...he was 89, and had a great run.

As a kid, I remember always laughing when he’d appear on Saturday Night Live. My favorite skit was when he was a customer and John Belushi was the Samuri Deli. Perhaps they’re recreating that skit now in heaven.

At a memorabilia shop years ago, I bought a framed movie poster of “Heaven Can Wait” one of my all-time favorite movies. It was signed and inscribed by Buck Henry, one of the co-writers and co-stars of the film. I’ve since had it signed by Dyan Cannon when she was at a book signing. One of my bigger regrets was not having Warren Beatty sign it. I knew he was going to be at a film festival, but I couldn’t justify carrying this huge poster around with me (and security sometimes notices things like that). I had to make due with having Beatty merely sign the back of my business card.

My all-time favorite movie is “The World According to Garp.” When I interviewed Robin Williams, I had him sign it. He was depressed the whole time I interviewed him, which was surprising (not as surprising after he killed himself). 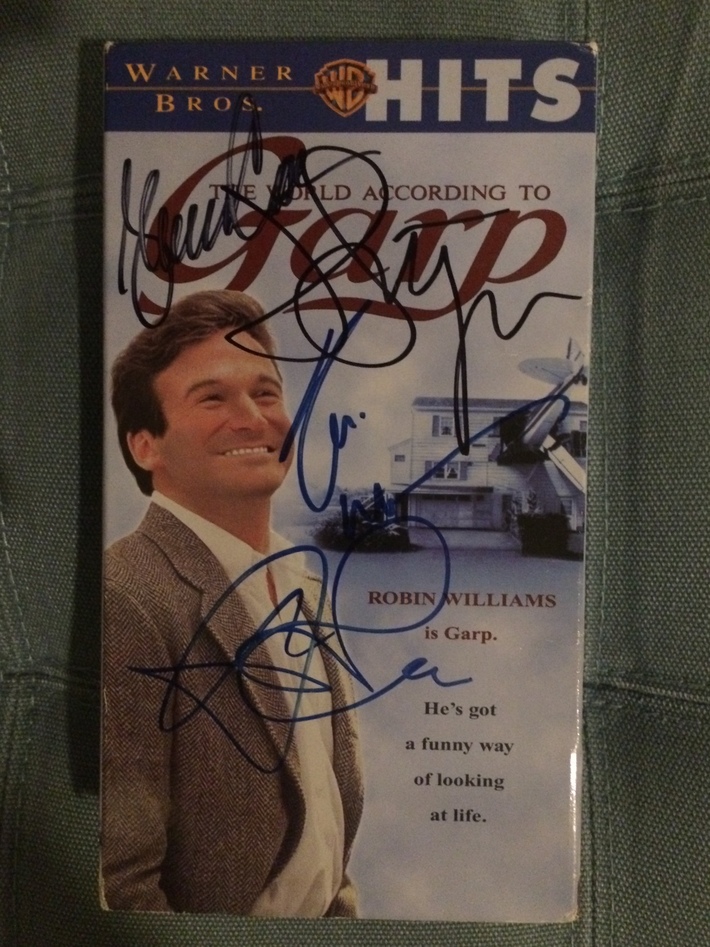 I had Amanda Plummer sign it after a play she was doing in San Diego (she has a rather small part in the movie).

John Lithgow I got to sign it after he did the hysterical play “Dirty Rotten Scoundrels.” He was really sweet and said, “Oh look, you got all these others to sign it, too.”

For years, I had waited for Glenn Close to be the signature to slap on the VHS box. It was her first movie, and she was nominated for an Oscar (as was Lithgow). It’s funny that she played Williams mother, and in real life, she was only 3 years older than him.

I was at a fancy party in La Jolla four years ago, and met a woman whose sister was Close’s personal assistant. I asked if she could sign the video for me and she assured she could. Yet I chickened out and didn’t send it, fearing I might never get it back. You never send items in the mail that you’re going to regret losing if they don’t come back. And something signed by most of the cast -- fits that bill.

Luckily, when Close was getting a lot of awards for “The Wife” (an amazing film), I got her to sign it. It is now complete! It’s just a shame that it’s my all-time favorite movie and...the signatures are on an ugly VHS video box of the film. Not some 8x10, or movie poster that would look cool framed.

Now...I’ll be back to focusing on “Heaven Can Wait.” Starting cast pieces are always tough. At what point do you draw the line? The fact you have a cast piece for The World According to Garp, albeit on a VHS, is very cool because how many individuals they have that cast on one item.

I agree it’s cooler to get a photo or poster signed, but something is better than nothing. My only complaint about cast items are celebs signing over one another, which is always unfortunate when it happens, but sometimes some people like to sign too big while others too small. Just funny how that goes

Exactly. And always after one signs over the other, I think....was there a way I could have said "Hey Glenn...I loved you in The Wife, but...can you not sign over John Lithgow?"

I remember getting a solo cd signed by Robbie Robertson (The Band). I won it on a radio station, after I called in and asked him a question (he was pissed and hated my question). Anyway...I saw that Garth Hudson played on 3 songs on the CD, so when I saw him performing a show with his wife in San Juan Capistriano (which is an easy venue to get autographs, at the Coachhouse), I had him sign it. Now, sure....CD space isn't that big, but...the dude signed right across Robbie Robertson!!!! I sometimes look at the CD and wonder...if I would have rather had it just signed by Robertson, instead of a second Band member signature, that signs over part of his name.

Yeah I feel your pain. I got JK Simmons to sign a Blu-ray of “Whiplash” and part of his autograph went over Damien Chazzelle, which was my fear. Then again it happens depending on the situation and if it’s a smaller item, that’s always the risk.

Also some people just have a bad graph and it’s just as bad as signing over someone. I got Casey Affleck to sign my Chasing Amy laserdisc and he essentially signed it with a single loop (first person on it). Every subsequent signer has said, “Who the (fill in the blank) signed this?” So it’s always a crapshoot. The way I look at it, where do you draw the line? Do I just get the stars or my favorite characters? Recently I met Nicolas Cage and got a bad graph (then again his autograph isn’t the nicest despite being a fan friendly guy) on a Fast Times laserdisc already signed by Amy Heckerling, Cameron Crowe, Judge Reinhold, and  Robert Romanus. Everyone neatly signed it and even added comments, but of course Nic was in a rush and signed it twice with his infamous “N” while at an event trying to accommodate as many requests as possible. I kick myself for doing it, but that therein lies the problem with trying to complete cast pieces. Do you add the big stars who became famous or just keep it simple?

Yeah, I say you keep adding the big stars. Funny that Nic Cage is one of the biggest stars from Fast Times, yet his scenes ALL got edited out of the movie!!!

And, who did Damien Chazzelle play in Whiplash? I don't remember him in it.

And on a side note...I'm friends with JK's wife, so...if you need another signature of him, I could possibly set that up (I don't like to do things like that, but....)

Heaven Can wait is one of the first movies I can remember my parents bringing me to the theatre to see. Great memories.