I’m a big Nirvana fan and I love collectables, so I was very interested to see that the 1959 Martin D-18E guitar he played on the MTV Unplugged show, went up for auction. This Unplugged concert was about half a year before Kurt Cobain killed himself.

There was a rather lengthy court battle over who owned it (you know Courtney Love; there’s never been a lawsuit she isn’t involved in). The guy that won that court battle, was married to Cobain’s daughter Frances Bean Cobain, and claims it was a wedding gift from her.

About five years ago the guitar was stolen in an extortion plot involving Courtney Love’s manager, and involving a break in.

He won the court case, then won big at auction. It sold for over $6 million auctioning it with Julien’s. 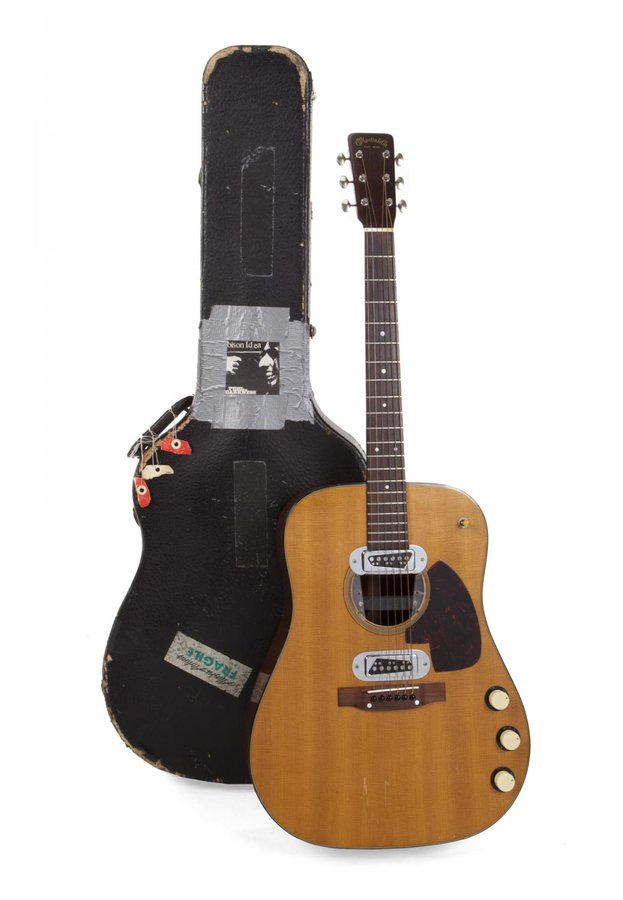 A businessman from Australia bought it, and it’s the most expensive guitar that’s ever sold at auction. He said he wants to display the guitar in a tour of exhibitions at various galleries and art spaces, and he’ll donate the proceeds to the performing arts. He even said at some point, he’s going to donate the guitar as well. Wow. If ever you can be happy about losing out on an item in an auction, this is the time. I was out of the auction after the price went up over $700 bucks. But I mean...hey...it was an acoustic guitar, not an electric, so...I wasn’t going to go that high. Now, another famous person’s guitar. And I’m writing this story with the recent news that the Blue Angels won’t do their annual air show in San Diego at Miramar Base. This “Blue Angel” is the guitar Prince owned, a Cloud 2 electric, 1984 custom-made axe. So this is one I’d go over $700 for. But, it ended up going for over $550,000. That was $448,100 over my price range.

This guitar was used in Prince tours for Purple Rain and Sign O’ the Times, as well as Lovesexy. He played it on a handful of TV shows around that time, too.

This guitar was thought to be lost, but now, it’s found (hey...that sounds like a song). The Julien’s guitar didn’t sell for as much a green model Cloud design that got $700,000 last year.

It wasn’t just guitars that sold at the last Julien’s Auctions’ Music Icons. Elvis Presley’s stage worn belt, with lots of shiny stones, went for almost $300,000. They thought that would bring in $10,000. Johnny Cash’s Valencia acoustic guitar, which was autographed by Cash and his Highwaymen (Waylon Jennings, Willie Nelson, and Kris Kristofferson), brought in $57,600. The white satin gown Madonna wore in her “Vogue” days, got $179,200. I would wash that after purchasing it.

Now, I’d rather have a guitar that sold fairly recently. It’s a Jason Becker signature model, Kiesel JB24 “numbers” model, with numbers on the frets and rainbow pickups and natural wood finish. It’s not just because of the colors and wood, but the signatures on it. And it only sold for $26,000. 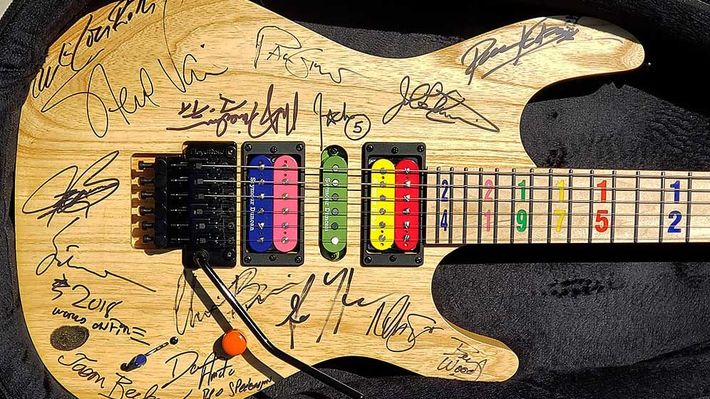 Beck was diagnosed with amyotrophic lateral sclerosis almost 20 years ago, and the signers were well aware of this.

Aside from all the various gear you get with this guitar (and there’s a lot), one thing Kiesel did I’m sure all of us autograph collectors will cringe over. He had a clear coat put over the body to protect the signatures from wear. A guitar magazine called this a “wise move” but...this would be like getting a signed 8x10, and then laminating it. You just don’t do that to signatures!!!

Another cool thing that came with the guitar, were picks from most of the guitar slingers that signed it, and photos at the time of their signing (always great for proof of authenticity).

All the proceeds of the sale went directly to the Jason Becker Special Needs Trust. I think the JB writing this...is in need of that damn JB guitar!

My Nirvana Bleach CD sold on the same auction. 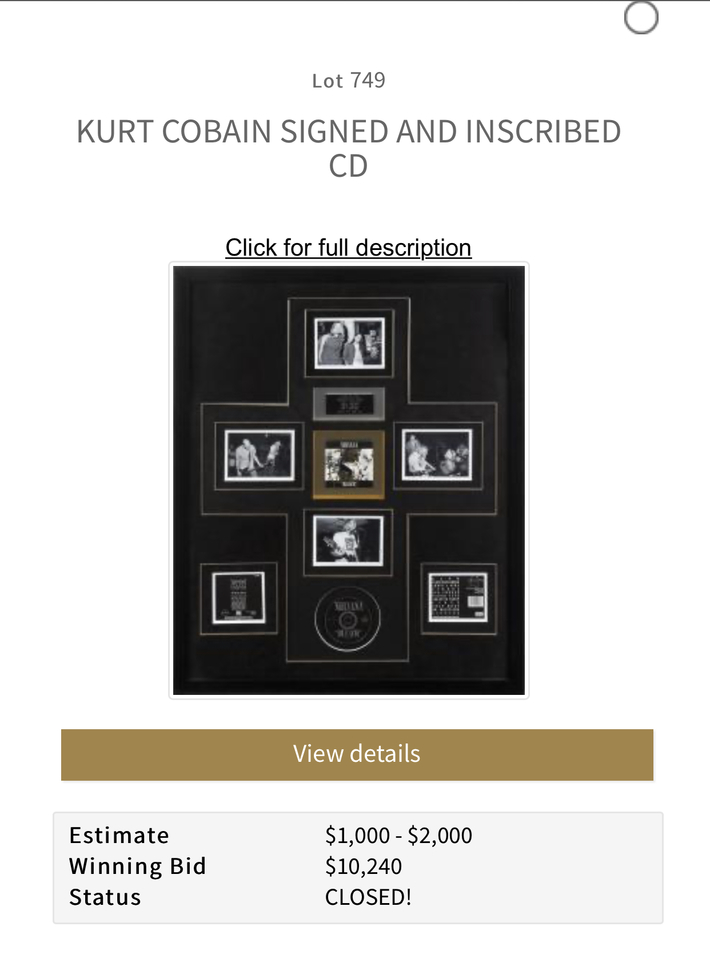 Hi Josh!! Great post as usual. As you know I am a big Nirvana Fan!!! I wish that I had the $$$. I would certainly bid on the guitar. It is such an iconic piece of rock & roll memorabilia offer to the public and now in a private collection when it should be in the museum at Rock & Roll HOF in Cleveland or MOPOP Nirvana Exhibit. The closest tjing I own from the Nirvana MTV Unplugged Taping is a ticket from that taping at Sony Music Studio. 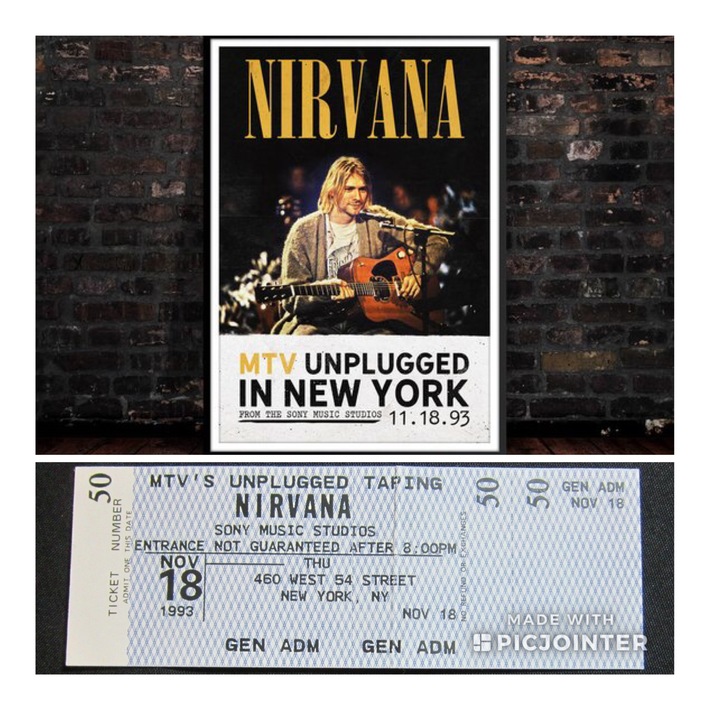 Good news for you! That's a good price to get.

Congrats on the big sale J.Seah. Insane how much his stuff is going for.

As for Kurt's guitar, I can't think of many guitars that would be more sought after than this one.

Thank you. I was pleased with the auction result.