Slow Winter on the Autograph Front

Although it has been a pretty mild winter, the autograph opportunities have been few and far between in the Cleveland area.  This is what I've been up to over the last 2 months.

I decided to make the trek to Pittsburgh to see the opening night of Springsteen's River tour.  We had GA tickets so I didn't try to get any autographs as we had to line up for the lottery to get into the pit.  A friend went down to try to get Bruce and said it was a crazy scene once people figured out that Bruce was there.  He said Nils, Gary and Jake signed but that was about it.  We ended up winning the lottery as #248 was called and I was #318.  We were in the pit which basically turned out to be 2nd row!  Only i person in front of me as I was right in front of Steve and Patti.  Best Bruce experience ever!  It was my 15th Springsteen show since '85.  Can't get much closer to Bruce than this!: Eric Burdon played one of my favorite venues.  I got to shoot and review the show and I figured I would bring my HOF poster and try to get Eric on it after the show.  He still sounds good for a 74 year old.  Unfortunately as he was walking off the stage after the first set, he tripped and fell pretty hard.  He came back a few minutes later to finish the encore, but I was thinking that he would be in no mood to meet fans.  Luckily, I saw the publicist and asked her if she could take my poster back and have Eric sign it.  She happily obliged and came back a few minutes later with a beautiful signature in a perfect spot.  Success! I interviewed Tanya Tucker to help promote her show at the Hard Rock.  I ended up getting free tickets but I didn't have to shoot or review the show.  So I figured I could just go to the show and listen to some classic country music.  I ended up buying a Rolling Stone where she was on the cover as a 15 year old, thinking I could get her to sign it after the show.  When I get my tickets at will call, they also included two Meet and Greet passes that I was unaware of.  I got there 15 minutes before show time so I missed it!  After the show, there were four fans who were standing in the cold waiting for Tanya.  A security guy tells us that she is already on the bus.  I know that's a lie because I heard a roadie say that she was still backstage.  I said that we weren't hurting anything by standing there and he said that "other people will see us congregating and they will want to come over."  So what?!  He then asked us to leave, and we did since this venue brings in some pretty good acts so why risk trouble for this one.  It was a miss! 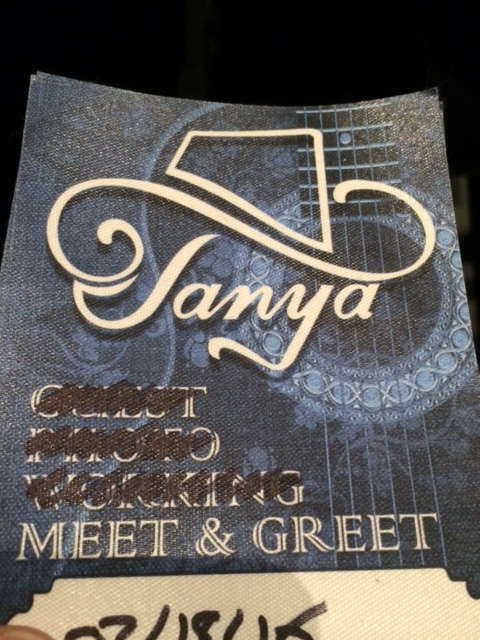 Springsteen played Cleveland and I decided that I couldn't top my Pitt experience so I sold my ticket.  A friend and I did try to get Bruce before the show.  After a 3 hour wait, Bruce rolls up, gives a peace sign and continues into the venue.  Huge miss!

In December, I set up an interview with Jason Scheff- the lead singer/bass player for Chicago. Thinking that they were due to get inducted into the Hall of Fame, why not take the chance and set up an interview before they officially got in?  As it turns out, a few weeks later they got the nod, but the Hall in it's infinite wisdom, only inducted the original members.  Leaving out a guy who has written hits and has been in the band over 30 years.  So I asked him about that and several other things.  He was awesome and set me up with backstage passes so we could talk face to face after the show.  I decided to have one of my artistic students draw the Chicago logo on a drum head and see if I could get the guys to sign it.  Another friend went out back to the buses after the show and was successful in getting the entire band.  I waited backstage and ended up meeting Lou, Tris and Jason.  Jason was great and told me that my interview with him is on Chicago's official web site.  That was pretty cool! I ended up getting 6 of the 9 guys on the drum head and 3 on Chicago 19 lp.  James Pankow and Lee Loughnane signed for everyone waiting.  I missed Robert Lamm.  Huge success overall. 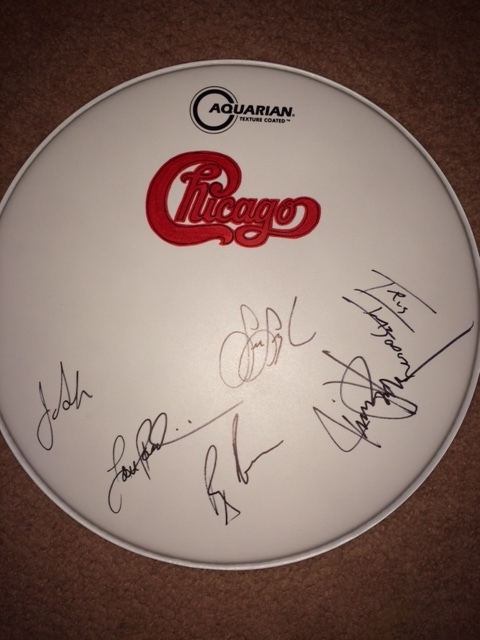 Jefferson Airplane guitarist and Hall of Famer, Jorma Kaukonen played a solo acoustic show the other day.  I brought my HOF poster and Woodstock poster for him.  My friend and I asked the guy at merch table if he would sign after the show.  He said that we could leave the stuff with him and he would get it signed for us.  I said that I didn't really want to leave that poster unattended.  He said that he would take it right back to him and we could get it at intermission.  Cool!  At the break we went back and everything was signed in blue sharpie.  I guess David Crosby didn't tell him about not signing in blue!

Eric signed under Alice Cooper and Jorma under Joe Walsh. 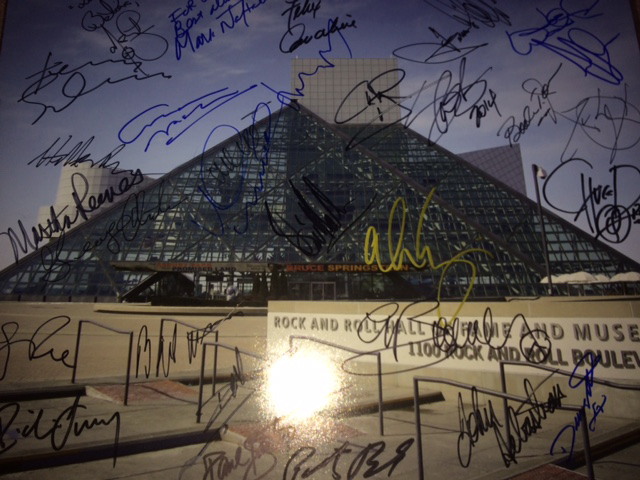 Things are starting to pick up over the next six weeks.  I have Operation Mindcrime, AC/DC, Elton John, The Cult, Joe Satriani, Ian Anderson and The Darkness on my calendar.  I would love to get all of them to sign.

Coach great blog! Warm weather down here so the graphing is decent right now! Keep up the great blogs!

Better get another rock hall poster,maybe a different pic to make a set.

Ian- That makes 30 so I believe it's time to frame it up!  I did print up a 11x14 and have a few people on it.  Some are the same, a few different.  Martha Reeves, Graham Nash, Mary Wilson, Felix Cavaliere, Jorma, Clem Burke, Chris Stein, Bill Medley, James Pankow and DMC from RUN DMC.  I don't really like that shot though. 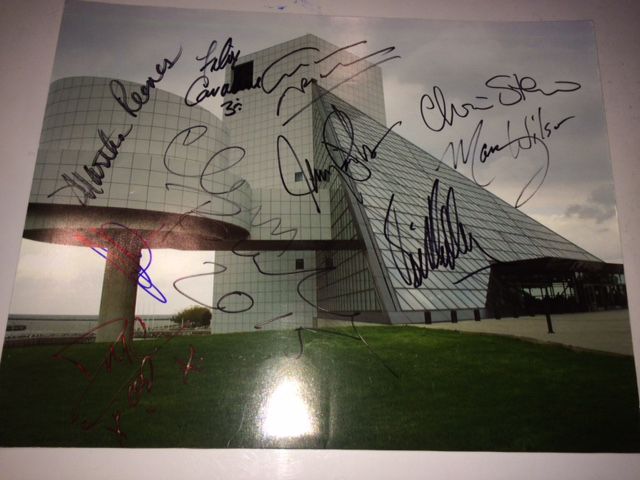 That's still nice,and you have good names on there!