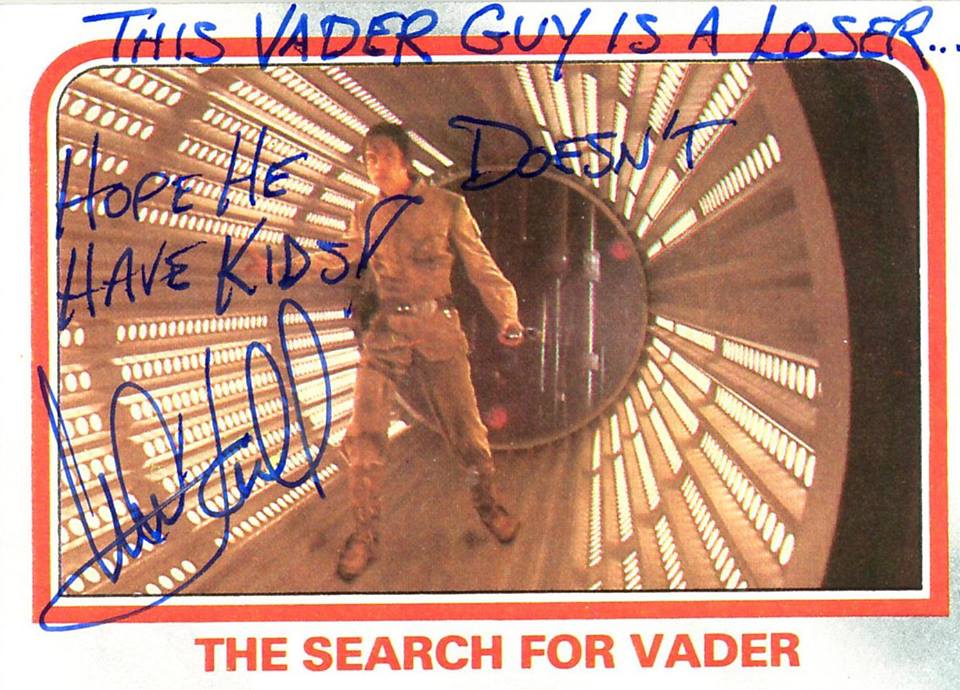 The last few years I’ve skipped the popular Comic Con, which is held right in my backyard of San Diego. The event is rather crowded and I just feel like I’ve seen it all at this point.

Each previous year I’ve gone, though…it’s autograph moments that I have the most fun with. Running into somebody like Stan Lee, Matt Groening, or author Ray Bradbury – all of them good autograph signers (well, Lee has gotten a bit harder over the years). Bradbury himself was an autograph collector, and has many good stories on the people he’s acquired.

This year, the biggest event seemed to be the original cast of Star Wars showing up. The crowd erupted in applause as Harrison Ford walked out, since he was recently in a plane crash that had him hospitalized.

I remember five years ago walking around the Con, and seeing Mark Hamill and Carrie Fischer signing autographs at a table. It was $35 a signature. I’ve recently seen photos of the both signed, that sell for over $300. So, it would’ve been a good investment (although the line was lengthy).

Peter Mayhew, the 7-foot tall guy that played Chewbacca, is there each year. He signs stuff for $20. I remember one year being in a steakhouse nearby, Comic Con ended for the day. He walked in and sat at a table. I wondered if I would’ve approached him for an autograph, if he would’ve still charged me. I was at a party a few years back when I found out Mark Hamill used to live in San Diego as a kid. A man told me a story about his older sister being a cheerleader at his school (Madison High). She’d bring him out as a young boy, and he’d wave the pom-poms and the crowd would go nuts. Well, at one of their high school reunions, she said he had gone to Hollywood to try to pursue a career in Hollywood. She showed pictures from Star Wars, and as he was looking at the desert shots, he thought the film would flop. It came out and he was mesmerized by it, not realizing it was the same movie until he saw the name “Mark Hamill” in the closing credits. He immediately bought another ticket and watched it again (I’m guessing he didn’t do that with Corvette Summer).

As a movie critic, the last film I remember seeing Hamill in was Kingsman: The Secret Service. A great movie I highly recommend (Hamill is only in one scene, though).

Hamill has always been good about signing autographs. Obviously, if he does an autograph show, he’s going to charge – and Star Wars pieces will cost you a pretty penny. If you ever catch him out-and-about, you’ll be able to get a freebie.

You’ll also be pleasantly surprised by the fact that he often writes funny captions on the photos and items he signs. I have a friend that hates when celebrities do that. I think it’s hysterical.

On a Three Musketeers 8x10, singer Bryan Adams wrote something about the movie being “gay,” and wrote “four” over the word “Three.” I think that’s interesting. He thinks his picture is ruined.

When I met one of the most underrated ‘80s musicians, Joe Jackson (not to be confused with that nut job from the Jackson family), he was ALWAYS rude to autograph collectors. The signed “Night & Day” album is one of my favorite records. I did bring another one, but he only signs one and won’t even talk to you, or smile while he does it.

On an album of jazz covers (Jumpin’ Jive), he wrote on my friends record, “I didn’t write a single one of these f**king songs!” He also scolded him for bringing that album for him to sign. I tried buying it from him, and when he saw how much I wanted it, I think he grew to appreciate the uniqueness of the piece.

Anyway…on your attempt to get Mark Hamill…or the talented Joe Jackson…may the force be with you!

Comment by Paul on August 4, 2015 at 10:15pm
Great read. Do you think people go up to Peter Mayhew and make a Chewbacca noise at the con.

And I personally LOVE those inscriptions!!

Paul, that is hysterical! I'm guessing at Comic Con, the answer is a big fat YES, they do!!!!