Wall of Shame -- The Autographs We No Longer Like The Tour de France concluded the other day. I know nothing about the guy that won. I stopped carrying about bike races after Ricky Potter beat me in a race in 4th grade. I do regret all those great baseball cards I ruined attaching them to the spokes, too (but damn did it make a great sound).

This blog isn’t about that, but an event Lance Armstrong took part in. He rode the Tour de France route for charity last week and not surprisingly, it was a much smaller crowd. The people were there either yelling negative stuff at him, or seeking autographs.

Some criticized him for taking attention away from the actual race.

It was a British footballer, Geoff Thomas, that invited him to ride in the Le Tour-One Day Ahead benefit ride, to help fight leukemia.

Armstrong signed autographs and said there weren’t as many people yelling negative things as some reported.

All of this got me thinking…is there anybody you guys have in your collection that you no longer like?

For example, I won a radio trivia contest when I was 17. I got $1,000 worth of prizes from various stores. One of those was a baseball card shop for $100. I didn’t care about the baseball cards but picked up three framed, autographed pictures. They were Johnny Unitas, Bob Feller, and O.J. Simpson. This was years before he murdered Nicole (allegedly. Oh hell…we know he did it, forget the “allegedly.” Steve can deal with his lawyers if they call). 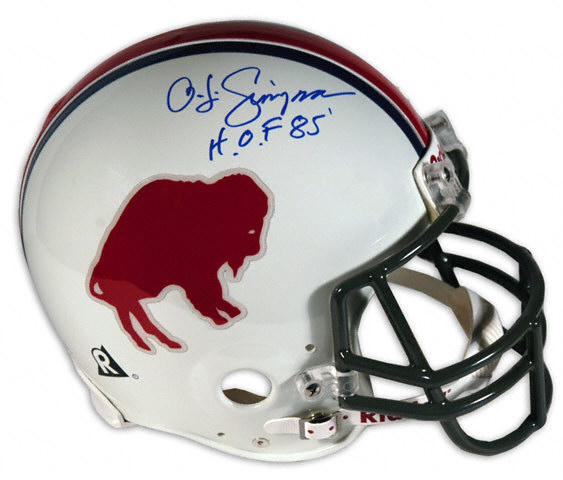 I have to think there are many that got Armstrong’s autograph when he was the best cyclist in the world…only to throw them away after the scandal broke.

Did people get rid of Ray Rice autographs after they saw video of him punching the woman in the elevator? What about Michael Vick after the dog fighting?

Of course, some people probably secretly got him to sign pictures of dogs. I remember reading a story in Autograph Magazine about a guy that got Hillary Clinton to sign a Monica Lewinsky book by showing up at her office, and having her book cover over it. Wow!

I’m guessing with lesser offenses, fans aren’t going to get rid of their memorabilia.

Ray Lewis is one of the best defensive players to ever step on the field, yet when he lied to cops and was involved in the murder of somebody…I guarantee nobody got rid of the signed photos, jerseys, or footballs they had from him.

I still have the O.J. signed picture, but will never display it. I remember Bill Cosby was coming to a venue in town that’s easy to get autographs at. Since I have six of his albums, I was going to bring a few for him to sign (he was always good about signing…but better about drugging the female fans…”allegedly”).

So…who do you have in your collection that you wonder about, or would think twice about getting?

I loved when a TV show was following O.J. Simpson around after the trial, and a woman came up to him on the beach and said, “Can I please shake your hand?”

As O.J. smiled and started shaking her hand she said, “I’ve never shaken the hands of a murderer before, thank you!”

He started to thank her, until he realized what it was she actually said.

If only more autograph seekers would do that.

That “I’ve never shaken the hands of a murderer before, thank you!” comment took some guts. Wow.

I have a few autographs of UFC fighters that are bad guys or have at a minimum done very bad things. Joe Son is the name of one of them. I won't be displaying this fellow but will keep him in the collection. He is a part of the early history of the sport and that means something to me.

I would not destroy historically significant autographs or items because the signatory has fallen from grace. It is possible to find value in an item even though the subject is less, or much less, than perfect.

If I had a Bruce Jenner I would burn it.

I went to the Chicago National about 10 years ago because they had a few Heisman winners that I needed on my FS Heisman helmet.  I was walking around and I turn a corner and literally run into O.J. Simpson, I couldn't believe it.  He was setting up a table and signing on his own, unannounced.  Of course I didn't have my helmet with me, so I run to the car and get it.  Yes, he probably committed murder- even though he was "not guilty", but the collector in me thought "When are you ever going to see OJ again?" What would you do?

I paid his fee and had him sign the Heisman helmet and I also ended up getting a mini signed, just like the one in your picture, but I also had him inscribe "Juice" on it too.  He ended up getting kicked out of the show, but he told people to go to his hotel across the street and he would sign there as well.

I'm glad I got him on the Heisman helmet, not many people have him.  And I have a good story to tell.

I wonder if Caitlyn Jenner would sign Wheaties Boxes or Olympic things "Bruce"?  If so, I would have no problem putting his name on my Olympic flag.  If she only signs as Caitlyn- I would pass.

Comment by Steve Zarelli on July 29, 2015 at 8:18pm
My sense is there will be no more "Bruce" Jenner autographs. For all intents and purposes, he is gone. Not an autograph I have followed, but have Bruce Jenner autographs gone up in price?

A "Bruce" 8x10 of his SI cover just sold for under $50 in the AW Signature Pieces Auction last Sunday, so I can't say they have gone up or down really.

In the wonderful world of Star Wars autograph collecting, we have seen a couple of less than reliable people pop up in the last 20 years claiming to have been a part of the films. Both Hal Wamsley and Lightning Bear have scribbled their names on multi-signed cast posters and items all over the world. Neither of them had any proof of their involvement, nor do any verifiable cast or crew members have any memory of them.

I was among the lucky few to only have them sign cards or photos, none of my big pieces were tainted by their graphs.  Most long time Star Wars collectors find themselves in a place where they have to start over or pay dearly to have autographs professionally  removed from posters.

Granted, neither of these guys killed anyone (that we know of), but some pretty sick stories have emerged from Bear's life once he passed. Reports of his comings and goings make Cosby look like Cliff Huxtable.

I saw some Bruce signed cards selling for $25 the other day on my card site, I thought they'd be much higher... guess not. I have seen items signed as "Caitlyn" now.

Rolf Harris, down the s******. There have been people covering his painting on walls etc. Once a highly decorated man stripped from his medals.