The Confederate Flag -- The Dukes of Hazard Edition The Confederate flag. I’m not a fan.

I remember 25 years ago, meeting a friends husband from South Carolina. He had one on the back of his Army jacket. We had this debate about it, and I could totally see his points for having pride in it. I didn’t have a dog in the fight, so I didn’t debate the topic with him for that long. I was also younger, and my debate skills weren’t as strong.

As someone from a Jewish family (none of which are religious in any way), I could understand the hatred of the swastika (even non-Jews feel that way). Yet here in San Diego, there’s a swimming pool that has swastikas all around it. Every five years, some tourist will complain about it, and there’s talk of retiling the thing. Yet it was built in 1908 when the swastika meant something else. In fact, Indians had been using that symbol for a completely different reason.

Yet there comes a time when symbols meanings change.

I once had a Charlie Chaplin mustache (because of a girlfriend, long story). Everyone thought I was a Nazi, or loved Hitler. Yes…it’s safe to say, Hitler ruined an entire mustache forever.

Bubba Watson, the two-time Masters champ, commented after a round at the Greenbrier Classic in West Virginia recently, on the orange Dodge Charger he purchased for $100,000. It was one of the originals used in The Dukes of Hazzard show (side note: that show should’ve been pulled long ago for sucking, not because of the flag…but I digress).

I, for one, think that’s an idiotic move.

Yes, after the killing of nine people in South Carolina, by a nutty racist dude that had photos with the flag, it’s a nice gesture. Yet when you deal with collectables, it’s a different matter.

I’m guessing my Jewish family members wouldn’t have a problem with a person that had Nazi memorabilia or Hitler signed documents. It would only be a problem if it’s glorified in certain ways.

Nobody would take an SS flag, and stitch over that.

Now, if Watson loved the show or loved collectable cars, he bought it as-is. To change that in any way decreases the value. Sure, he’s a rich professional athlete, so the value of it isn’t the least of his worries; but I think he’s making a mistake.

Currently, an auto museum in Illinois wanted to buy the car as it is now, without the flag being painted over.

Watson thinks the statement that we are all “created equal” works with an American flag. I think if he’s going that route, maybe he should paint it like this: 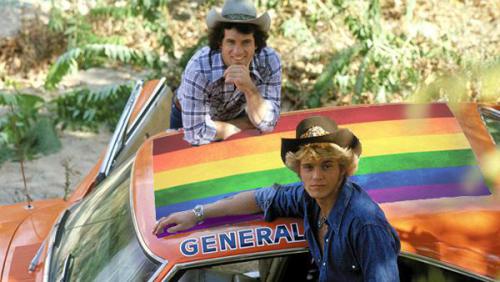 Ask the people of chicago how the gun ban is going.

Comment by Rick on July 7, 2015 at 1:08pm
While I understand the people that want the confederate flag taken down as it has unfortunately been used by racist people to represent the times of slavery. I also understand the proponents of keeping the flag as it represents a time in our history. I would say that flying the confederate flag on government buildings doesn't represent all people of a state. It should be allowed on personal property and businesses that choose to fly it. Back to the General Lee- the flag should stay as removing it decreases the value.

Exactly, Rick. It would be like having a Nazi flag from the show Hogan's Heroes. You don't have it fly from your front porch, you don't display it anywhere, but you certainly don't take the swastika off it!

Comment by Paul on July 8, 2015 at 9:05pm
Australia has tight gun laws, although there are shootings there's definitely no where near the problems America has with mass fatalities. Why don't you change your constitution? Is the flag really the issue? Doesn't the Nascar fly the flag? What happens when the next middle white class kid goes on the rampage? Will the ban on the flag solve the problem?

Comment by Xwiesy on July 8, 2015 at 9:07pm
Hats off to Watson- he values people and decency over the value of memorabilia.

Much as I despise people who tamper with historical artifacts (if a Dukes of Hazard car can be considered one) I am also aware the owner can do what they please with it.  I would leave it as it is a relic of a time gone by.  I am personally opposed to any government adopting a Confederate flag as an official flag.  Anyone that wants to have their own Confederate flag should be able to.  Granted I am biased since 2 great-grandfathers and 2 great-great grandfathers served in the Union Army (one died at 27 a week after being released from a Confederate prison at Salisbury).  On the other hand my father was born in 1916 and was delivered by a Confederate Civil War veteran who came north after the war.  So as in most things I take a moderate view.  Official state sanctioned Confederate Flag...no.   Privately owned and flown (within whatever restrictions apply to any flag in that jurisdiction) yes.

Xwiesy -- it's a decent point, but...it would be the equivalent of buying the Mustang used in Bullitt...and having flames painted on the side of it! If a car is used in a movie or TV show, you keep it looking like the original. Now...if he plans to drive it out and about, then what you say "valuing people and decency"...I'm in full agreement.

Comment by Barry S on July 11, 2015 at 9:52am
Nascar canceled plans for him to drive the car at Phoenix because of fears of negative reaction. Nascar is ripping out seats as fast as they can to make the stands appear more full. I guess they would love to sell more tickets no matter what color your skin is.