I made all of the necessary preparations.  I placed the photo into a protective folder, and then into a protective envelope.  I tested my blue Sharpie, so that his autograph would match Robert De Niro’s and Martin Scorsese’s autographs.  Everything was perfect.

The location of the convention was the Meadowlands Exposition Center in Secaucus, New Jersey.  It was not very crowded when I arrived at 9:30 AM.  The line to enter was reasonable.  I went directly to the booth where the autograph tickets were being sold, purchased my autograph ticket and headed to the show floor.  The line for his autograph was one of the longer lines.  He does not make many public appearances.

Most of the fans were having him sign the poster that was being sold at the convention.  A simple autograph with his black Sharpie.  I showed him my photo, and he was very excited to see it.  I asked him if he would be kind enough to sign it with my blue Sharpie.  I also had my specific request written down on paper.  TO MICHAEL, STAY OUT OF MY PLACE, I KNOW YOUR FACE!  I also asked him to add “TONY”, his character name from the film.

The two of us laughed about the request.  He appeared to be very excited about it.  I could not have asked for a more pleasant experience.  I have attended many conventions in my life.  It is rare to meet people who are genuinely kind, and not just going through the motions of being polite.

He took the extra time to sign my photo.  I shook his hand and thanked him.  I also told him to keep my blue Sharpie, since he only had black Sharpies available.  Then I looked down at my masterpiece.

TO MICHEAL, STAY OUT OF MY PLAE I KNOW YOUR FACE 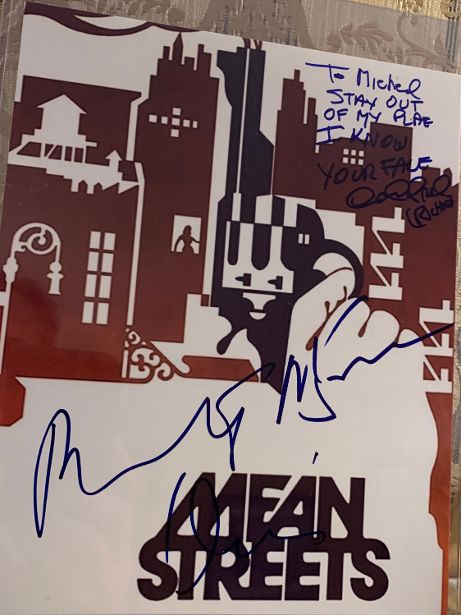 My autographed Mean Streets photo.  I absolutely love it.  I hope to add the autograph of Harvey Keitel to the photo one day.

I will let you find the errors on your own, and understand the reason for at least one of them.  It is, however, very important that you understand my purpose.  I absolutely love this piece.  Like my Reggie Jackson autographed New York Yankees baseball jersey, it is unique, and the memory is irreplaceable.  It also serves as a reminder that celebrities are only human, just like the rest of us.  They are liable to make mistakes.

I hope to meet David Proval again one day so that the two of us can enjoy one more laugh together.

He wrote Richie instead of Tony. As you say the are only human.

Yes.  I noticed it after I walked away from his booth.  Nothing could have been done to correct it anyway.

I’ve been there before when someone misspelled and became dyslexic when copying a quote at an autograph show. The human factor is always hilarious and at the very least it’s a cool anecdote. Thanks for sharing!

I could not agree more.  My pleasure, John.

Great memory definitely. It is similar to a report I read on another board about someone meeting Dirk Benedict and Dirk being really excited about signing a wrestling movie item. I'm sure David enjoyed meeting the Sopranos fans and catching up with co-workers but he also probably enjoyed signing a rare item and who knows, it may have been one of the few non-Sopranos items he signed that day.

He definitely seemed to enjoy it.  Thanks, Jason.