The Last Few Weeks in Autographs and Auctions A few autograph/memorabilia type stories from the last few weeks that I thought would be of interest.

A gold pocket watch Babe Ruth owned sold for $650,108 at an auction. Now, I totally understand when an engraved humidor from comedian Milton Berle to John F. Kennedy went for $500,000. Those are two big names, and it was engraved and owned by a President.

A nice item that wasn’t autographed was Satchel Paige’s 1971 Hall of Fame induction ring. It went for almost $260,000 – the most ever for a baseball-related ring.

I’m not a baseball autograph collector, but was once in a bidding war with somebody over a signed Satchel Paige business card, from when he managed a team. I lost. 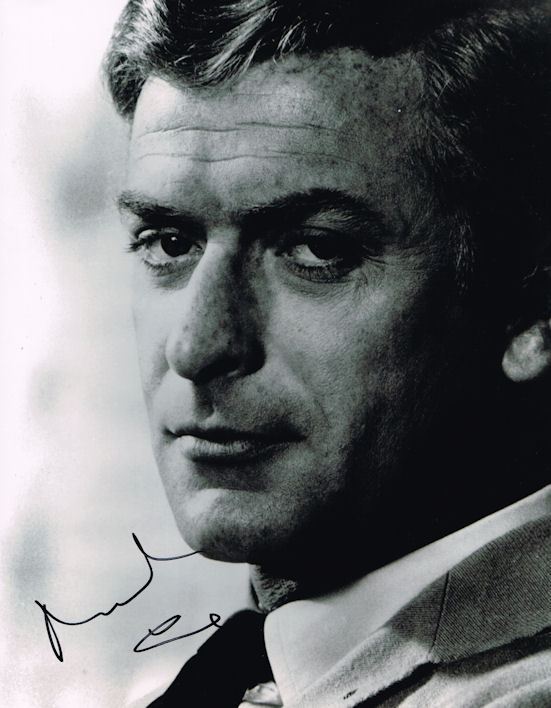 In the latest Esquire magazine I was reading, they had a great interview with Michael Caine. I always love when celebrities talk about wanting autographs or wanting to meet other stars. At one point, Caine said, “I had come to Hollywood to star in a picture called Gambit. I used to sit in the lobby of the Beverly Hills Hotel and look out for film stars. One day, John Wayne came in, saw me, and said, ‘Are you in that movie called Alfie?’ I said, “yeah.’ He said, ‘I just saw that. It’s very god, son.’ And we became friends. He gave me some advice. He said, ‘Never wear suede shoes.’ I asked why and he said, ‘Because you’ll be taking a piss in a men’s room and there’ll be a guy next to you, and all of a sudden the guy will turn and go, ‘Michael Caine!’ And he’ll piss all over your shoes!’ I never wore sued shoes again.

And to think – Carl Perkins (and Elvis) were merely worried about people stepping on their blue suede shoes!

Well, we’ve joked about George W. Bush’s paintings (which aren’t horrible). Sotheby’s had an auction recently where they were hoping to get almost a million dollars for an Impressionist-style oil painting by Winston Churchill.

There was another painting called “The Weald of Kent Under Snow” which had a view from his house.

The auction had sketches of animals and fruit, and other things offered by his daughter Mary Soames, who died in May at age 91. She kept all these things in her London home after his death in 1965.

The item autograph collectors would like most would be a photo of Franklin D. Roosevelt, signed and inscribed to Churchill’s daughter (“To Mary Churchill from her friend, the other naval person.”

A Churchill painting once went for $2 million in 2007.

As a cigar smoker, I wouldn’t mind having the humidor of his that was up for sale, but…I’d prefer the Milton Berle/JFK one. The craziest story involved…who else…Charlie Sheen. He went off on Kim Kardashian late Tuedsay morning, because she turned down an autograph request from a 6-year-old girl. He was tweeting that she should go “f*** yourself” for crushing a little girl’s dream. There was mention of the girl crying over it, and Sheen added to his tweet “You are lucky that ANYONE cares about your gross and giggly bag of funk you dare call an ass.”

And in a statement all autograph collectors like hearing, Sheen writes “Your public loves u. give something back or go f yourself.”

Of course, not wanting to be shot like Notorious B.I.G. or Tupac, he ends with “My apologies to your hubby, great guy I’m sure, I hope his vision returns one day.”

Sheen has since deleted the post, and apologized a few days later.

Hopefully next time, it’ll be autograph collectors that are “winning!!!!!” Comment by Paul on January 11, 2015 at 11:22pm
Kim.k is not a great role model for little girls god help me if my daughter's look up to her and the likes of Paris Hillton. There only famous for being you know what.

YIKES!  People actually think that thing is attractive?  She does have a pretty face though.

Those photos have to be photo shopped no way that thing is hers?

Brian...I think it is really her butt. I was once watching the reality show (come on, nothing else was on!). She walked up the stairs, and was wearing jeans. It looked EXACTLY like that. I literally started screaming. It is so utterly disporportionate, that it looks fake. That's why...it's one of the rare times a ranting Charlie Sheen actually makes sense!

I cant understand the Kardashian "phenomenon". Charlie Sheen is nuts but I like him for not sugar coating things.

She has had some type of implant.  No way can someone be that unproportioned naturally.  It looks gross.

My favorite is when people like her or the Hilton's talk about how hard they work and work ethic, when in fact they've never worked one day in their life, had a real Boss or any responsibility.