The Two Bruces -- Springsteen and Jenner 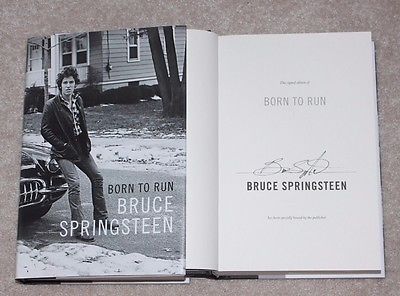 My wife’s favorite singer is Bruce Springsteen. She’s from Jersey, what can ya do? She was going to drive up to meet him at the book signing in L.A. She’s glad she didn’t, as many in line didn’t get to meet him. You had to show up and camp out at midnight. I told her that one of the bookstore chains has been selling numbered books autographed (it was written about on this website somewhere). I found it fascinating that they were so expensive. Springsteen is this guy that always bashes the republicans, and he’s for the “working man,” but...what working man can afford the book at these prices? Why doesn’t he just sell them for $25 more than the listed price? He’d sell a million more books. It would stop the eBay people from profiting and ALL his fans, no matter what their economic background, would be able to acquire one.

My wife did bring up something else that I found interesting. Why doesn’t he do more charitable things? She’s been to some of his concerts where there’s a canned food drive, but that’s about all you hear from him regarding charity. Oh wait...he’s more interested in bashing Trump and doing an anti-Trump song. Got it. The republicans don’t do enough for people, but rich singers don’t have to either. They can just gripe about it.

In other Bruce news, but a different Bruce -- Olympic gold medalist Bruce Jenner. I said to the wife, “You know a way he can make a million dollars very quickly?”

She replied, “Selling his wiener on Ebay?” 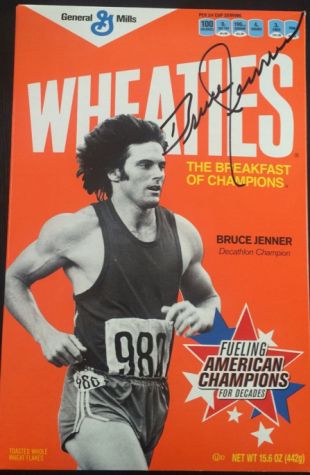 I love that sense of humor, and the fact that she realizes fans are so nutty (no pun intended) they’ll buy anything that’s a collectable. But, I had this idea regarding Caitlyn Jenner, because years ago when I interviewed artist Peter Max. He contacted me later asking if I’d help him broker an autograph deal. Some company offered him a million bucks to sign limited edition prints. He wanted me to look at all the details and tell him if it were a good deal. Well, it made me think that Caitlyn Jenner could contact a memorabilia company and say, “Look...I’m no longer Bruce Jenner. But I often get asked to autograph 8x10 photos and old Wheaties boxes. I’m never going to sign the name ‘Jenner’ again, but for a million dollars, I’ll spent 4 hours signing as many autographs you want, as Bruce Jenner. It can be on Olympic flags, photos, whatever you have. You guys can photograph me doing it. You guys can sell them for whatever you want. You can bill it as “The last autograph of Olympic medalist Bruce Jenner ever.” I’m sure a company would jump on that, and the autograph collectors that want a Jenner signature can get one. Now, I’m not saying I’d buy one. I’m not a big enough fan. Sure, I had a Jenner post on my wall as a kid, but I despise the Kardashians so much, and also his hypocrisy, that I’d want nothing to do with that dope. But certainly the fans are out there.

Side note: my favorite “Bruce” signature is from Bruce McCulloch of The Kids in the Hall, the best sketch comedy show of all-time. Comment by Cogo on April 27, 2017 at 8:54pm
As a fan of Springsteen (as seen on the link below) I kindly disagree with what your saying about the prices of his signed book.

In my opinion both the signed books and especially Springsteens meet & greets are priced way way below what other comparable stars are charging!

Can't speak to much about his charity commitment, know to little about that. But in general I feel that many stars just use charity events as way to get PR for themself and I'm glad Springsteen isn't doing that!

"...In other Bruce news, but a different Bruce -- Olympic gold medalist Bruce Jenner. I said to the wife, “You know a way he can make a million dollars very quickly?”

Jan, the meet-and-greet prices were fine. It's the selling of the numbered, signed books that I had a problem with. And...I just don't understand why he wouldn't sell signed CDs or books via his website, or some company. He'd make millions and millions OR...he could give millions and millions to charity. He's never been the most charitable guy in terms of money given.

Eric, you bring up a good point, but ya know what? That entire Kardashian family is horrible to people. Just horrible. So, if they can be horrible people, making a few jokes at their expensive, doesn't seem so bad.

Ignoring them completely is an option too.

How do you know how much Bruce gives to charity?  Just because he isn't beating his chest doesn't mean that he doesn't give.  I think most celebrities write checks rather than become a spokesperson for a charity.  If I was the charity, I think I would rather have the check.

By the way, it's not just an occasional concert where he has a local food bank set up a table for a collection, it's EVERY concert in EVERY city.  It's more than a canned food drive- since most people don't bring cans to shows- they collect money that can be used for the items that they need.  And notice I said local, since most national charities take a percentage off the top to pay their CEO's.  He's putting money directly into the hands that need it.  I also believe he gives a percentage of his earnings from each show to the local food bank as well.

I can't think of any other artist that went on a book tour that allowed over 1500 fans to get a signed book and a picture with them from each city.  I remember Jimmy Page did a book "stamping" in New York where you got a stamped book- not a real signature- and no pictures were allowed.  Big difference.

I agree, it would be nice for Bruce to sell his books on his site for $50, but wouldn't most people say the free market dictates the price of an item?  People would buy them up and still sell them at a higher price on ebay, right?  We see that all the time when artists sell signed cds, books, posters on their site.

Uh...Bruce does beat his chest telling you. In his book. In the book, he talks about ALL the charity things he does, and what's important to him. And guess what? It's not a lot of charitable stuff, considering how much he makes.

He also pays his band poorly (his own words...pays them more than they'd make with any other band, but not even a fraction of what he's making from the live shows).