Everyone knows R. Lee Ermey, even if you don’t recognize that name. He first came onto my radar when I was in high school and “Full Metal Jacket” came out. He was the intimidating drill sergeant in everyone’s face. He was in the “Toy Story” movies and about 75 other films. It was the late ‘90s and a few of the radio stations I did movie reviews for, seemed to always have him coming in. That’s because he did a lot of volunteer work for Toys for Tots, as well as for the military. I met him a few times, and he was always nice. He shared great stories, and perhaps it shocked people, since we’re so used to seeing him scream. I watched as he took photos with fans and signed autographs, although I never got one for myself. Mostly because I didn’t have anything for him to sign at the time. It’s been decades since I asked somebody to sign an autograph on just a scrap of paper. Of course, had I known he was going to be in the studio the same time I was, I would’ve brought a DVD. He passed away at 74, due to complications from pneumonia. Now, somebody that hasn’t passed away but just this morning says there’s a good chance he may be murdered -- is the always nutty Corey Feldman. You probably remember that child actor best from “Stand by Me,” but he did a handful of popular movies in the day (I’ve still never seen Goonies). That of course, lead to his bizarre “friendship” with Michael Jackson. Now, Feldman claims he and the other Corey -- Corey Haim, were molested and that Hollywood is filled with child molesters. He claims they were never abused by Jackson, though. Last month he was rushed to the hospital claiming to have been stabbed in the stomach. Hospital officials say he had no wounds, to which he said that’s because it was done with a needle. Now he’s hired bodyguards, claiming Hollywood wants to shut him up. He’s also done a crowdfunding thing to raise money for some bizarre movie he’s working on.

Anyway, I was at a party in L.A. to celebrate The Doors 35th anniversary, or some such event. Since they are my favorite band, I worked my butt off to get a press pass. It was great to hang out with guitarist Robby Krieger, and the late keyboardist Ray Manzarek. Of course I had them sign a few things, and I talked with a few other musicians there that I’m a fan of.

When Corey Feldman walked in, I laughed. At the time, my girlfriend was obsessed with watching his reality show with the other Corey. At one point, we were standing next to each other, and I told him this. He smiled and said, “Cool, man. Glad to hear it.” I then said, “Hey...if I get her on the phone, can you say hi to her?”

He looked at me and said, “No man, I can’t do that. I’m sick, and...my throat is all scratchy.” He then got his drink and walked away. I was kind of bummed because...I’m not even a fan. I just thought it would be a cool thing to do for my girlfriend. And she doesn’t care about autographs, so there was no point in getting him to sign something for her. 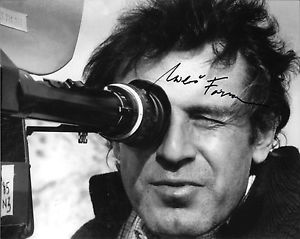 Now, a director died the other day, and it broke my heart. I was a huge fan of Milos Forman. When I was in my 20s, I got an address for him that was listed in Autograph Magazine. Since I had 8x10s from “One Flew Over the Cuckoo’s Nest,” I sent him one to autograph. He signed it and sent it back. I still cherish that item.

He won an Oscar for that film, which ended up winning five Oscars in all the main categories. That hadn’t been done since the mid-30s (and wouldn’t be done again until “Silence of the Lambs” almost 15 years later).

He won his second Oscar director “Amadeus” and was often quoted as saying, “Well, I’ve peaked.”

He still did the interesting “People vs. Larry Flynt.” Who would’ve guessed a movie with Woody from Cheers, and Courtney Love, about the founder of Hustler magazine, would be any good? I also liked his movie “Man on the Moon” about Andy Kaufman. Apparently he did, too. It inspired him name the kids he had with his third wife -- Jim and Andy (Jim Carrey played Andy Kaufman in the movie, which I think should’ve landed him an Oscar nomination, but that’s another story for another time).

At least Forman lived to 86, and we can always go back and revisit his amazing catalog of films.

Corey Feldman does autograph shows fairly often, you’ll get him if he does one that works for you.

Oh man, that's a shame. I hate trying to complete a piece, and knowing it's never going to happen.

You can get signed S/T Corey CD’s for $50 off his website. Unfortch, his spectacularly radical new offering “Angelic to the Core” is no longer available signed. I should have snagged it when I had the chance, lol

Since I'm not a Corey fan, I didn't care that I missed him. I just wanted him to leave a funny message for my girlfriend at the time. He's got such a distinct voice, it would've cracked her up. It's funny because...sooooo many people love selfies. I get that. I prefer using my phone, to have the celeb call one of my friends or family members. They aren't expecting it, and it freaks them out. I've done that with Tom Jones, Esai Morales, Rick Derringer, Martha Davis (of the Motels). It's a blast, and they usually save that message for years.

Leaving phone messages, that's a idea! I once had a Rich Little tape of various "answering machine" impersonations that I would use. It always drew a response from my callers. Imagine Ronald Reagan's voice asking for someone to leave a message!

That's funny. One of my reporter co/workers, interviewed Charles Barkley and had him leave an outgoing message about how they were out partying and she'd get home when she gets home. It was hysterical.

Lest anyone get the wrong impression, not so much a fan of the man (although he was great in Stand By Me and Goonies!) as a mesmerized witness of his bizarre life. Anyone who saw him on GMA performing cuts off his new album knows what Im talking about!!