Stuntmen have all the luck. Okay, wait. Scratch that. I just remember a book about Hollywood I read once (You’ll Never Eat Lunch in This Town Again), the first female film producer in Hollywood talked about a stuntman on the set of “Close Encounters of the Third Kind”, driving 50 feet off a cliff and having his leg snap. He insisted they not call an ambulance, because stuntmen that “complained” didn’t get work. So, aside from the injuries and death involved, they have all the luck. That is, when it comes to getting memorabilia.

I was at a party once and met an older stuntman. When he found out I collected memorabilia and autographs, he told me he has 10 things in a storage unit I would find interesting. One of them was one of the aliens from the movie “Alien.” The most exciting thing was two acoustic guitars signed by The Beatles. He was working on one of their films, and decided to have them sign his guitar. A few days later, he thought it might be better to have them sign a new guitar that wasn’t as scuffed up, so I bought a new one they signed it. I told him that he could get so much money for those, instead of having them languish in a storage unit (or possibly stolen or damaged). He didn’t seem to care, and believe me, I tried.

I thought about that stuntman when I heard about Tony Todd, a stuntman who like everyone else, was watching the documentary “The Last Dance.” As they talked about Michael Jordan it hit him -- he had a baseball bat autographed by Jordan. Well, it was a phone call with a guy reminding him about it, and then it hit him. It was sitting in the trunk of his 1966 Pontiac LeMans, where it had been for 13 years. It was used in the 1994 Arizona Fall League game when Jordan was stinging pitchers as a hitter for the Scottsdale Scorpions. Okay, perhaps that was hyperbole. He didn’t have the best batting average. 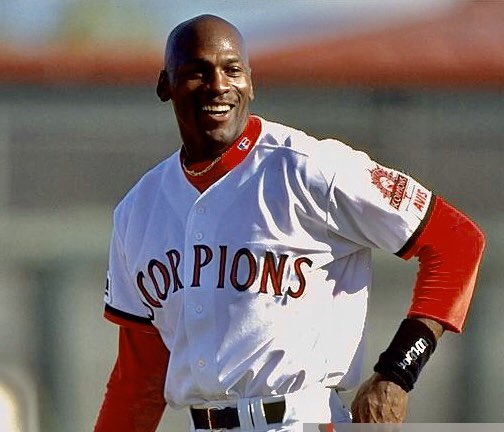 He had forgotten about the bat until the phone call, and he ran to the car trunk to see if it was there, wondering if the autograph would still be on it.

Todd had been at a charity event where he got to meet Jordan after the Scorpions game. He signed the bat and they took a photo together.

Todd also mentioned that he has bats from Pete Rose, Sammy Sosa, and Ken Griffey Jr., but he was smart enough to keep those in a safer place.

The bat was auctioned tonight. Hopefully somebody will update and we can find out what it sold for. I’m guessing $20,000.

It's funny, Jordan is known for performances on the basketball court, but all the best stories come from his few years playing baseball.

It shows 20 days left on the auction. Not sure what's up?

That's crazy that nobody bid on it yet.