For a long time, collectors have been warned about the potential for Arnold Schwarzenegger's TTM signatures being secretarial, especially due to the fact that there seemed to be no short supply of them in the 90s. These signatures are VERY close to the real ones, and they can be tough to spot without regular familiarity with Arnold's signature.

Please feel free to let me know if you agree with my opinions, and if there is any other important information that should be included.

There is also a "riddle of steel" to solve at the bottom, concerning official autograph cards. Please comment and help out!

If you were to trace a line under these signatures, you'd end up with a very squiggly line. The letters, especially in the "nol" and "hwarzene" do not touch on the same invisible horizontal line under the signature.

These signatures usually have an upward slant to them, and are usually signed straight across the bottom of something.

The letters in these signatures "stand upright".

These letters tend to be very "loopy", with no definition of different letters. It is more of a continuous squiggly line.

The "C" and the start of the "H" tend to bow away from each other.

This letter is usually very rounded and small, with the second dip of the w very much like the first dip.

These letters are usually formed loosely, and they all aren't running in the same angle/direction.

To ensure the accuracy of this study, I tried to include only "official" verified hand-signed signatures. The first is from a fine art print signed for Sideshow Collectibles in 2005. The next are various in-person signatures from Arnold's book tour in 2012. The final is from Arnold's exclusive signing with Easton Press for a special edition of his book.

These signatures usually have a rightward slant to them, with about a 15 degree pitch to the signature, in comparison to the upright letters found in the secretarial signatures. Arnold tends to have an overall upward slant to his signatures. Unless he has to sign on a straight line (such as the lines provided on the official signed books), his signature tends to  have an overall upwards drift. This can even be seen on the line provided on the Easton Press COA. His signed books without a signature line tend to have an upward drift to them as well.

While some of these letters can occasionally have a loopy characteristic to them, the letters are more defined as three individual letters.

The "W" tends to be larger and more defined on an authentic signature. It is not as rounded, and oftentimes the first dip in the "W" is larger than the second dip.

These letters are usually tightly defined, and they are usually running in very similar angle/direction.

Below are autograph cards from Batman & Robin (signed in 1997) and Conan The Barbarian (signed in 2011).

These cards have some characteristics that somewhat contradict the rules I posted above, namely:

However, these signatures share common characteristics with the rules posted above:

So, what are your opinions on these "official" items? Could it just be that they don't follow all of the rules because a card is MUCH smaller than the space Arnold usually signs in?

I was told by someone with insider info that Arnie did NOT indeed sign the Batman cards... Now that I've compared the cards with your secretarial examples, I'm well convinced that is true.

Another similarity I didn't see mentioned is how far down the "z" is pulled in the secretarials vs the other authentic examples. The Batman cards have that same characteristic.

Thanks for this post.  I assumed mine was secretarial for a long time, and I think this further confirms that.  I'd posted this one a few months back, and that was basically my conclusion.

I want to share more of his recent ones signed in person standing (i.e. not a sit down one) for comparison since fakes are increasingly getting sold on eBay as "in person" so that it becomes harder for people to tell.

And some of his recent, proper sit-down ones. 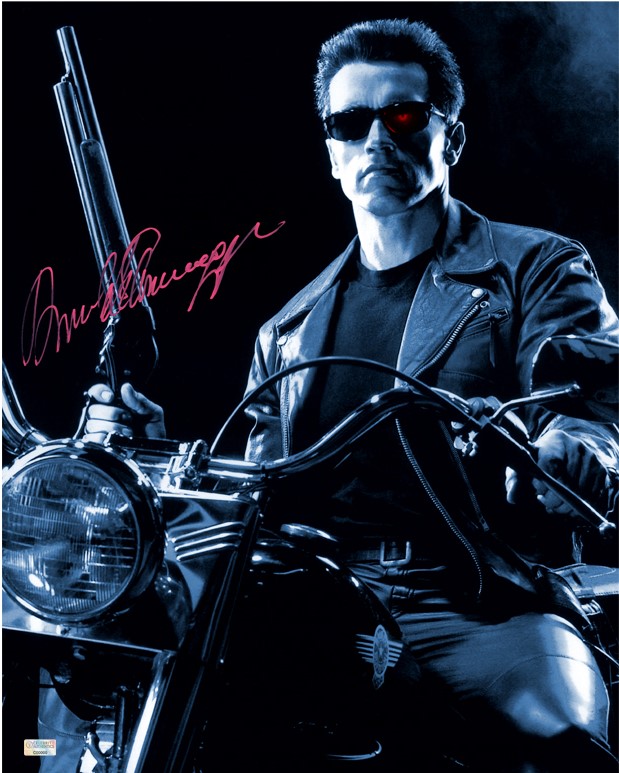 Some more. Hope these help Hey Jonathan- Do you have a full shot of the signed mini-poster and any info on how the sigs were obtained? I'm trying to get this guy banned from selling on eBay, Esty etc... he sells completely bogus "cast signed" posters (including T2) and I have filed complaints but could use some genuine examples to bolster the case.

Here's his poster, for references. Even a quick glance shows it to be a fake.

Permalink Reply by Jonathan Tam on June 7, 2017 at 11:10am
Yeah I've seen this guy. I'm trying to sell my Arnold autographs on eBay too and his s*** is honking the prices down and buyers don't know better. Trust me I filed on eBay with all the bogus Terminator Autographs and they won't do a thing - they make success fees for a living remember? And PayPal fees and listing fees. So no, unless this make a international news or else they will let this slip. There is another user who keeps selling Schwarzenegger autographs claiming they got it from Arnold Calais Ohio but I doubt Arnie signed 15 for them.

The mini poster auto came from Celebrity Authentics send in.

Gotcha. Well, if it makes you feel better I filed complaints against him with eBay, Etsy, Artfire, and eCrater.

Trust me - won't change anything.

If you're looking to buy Arnold autographs online, ONLY trust Beckett - don't trust PSA or JSA, they approve secretarial signatures and sometimes fake / suspecious ones.

For some reason the photos didn't show. 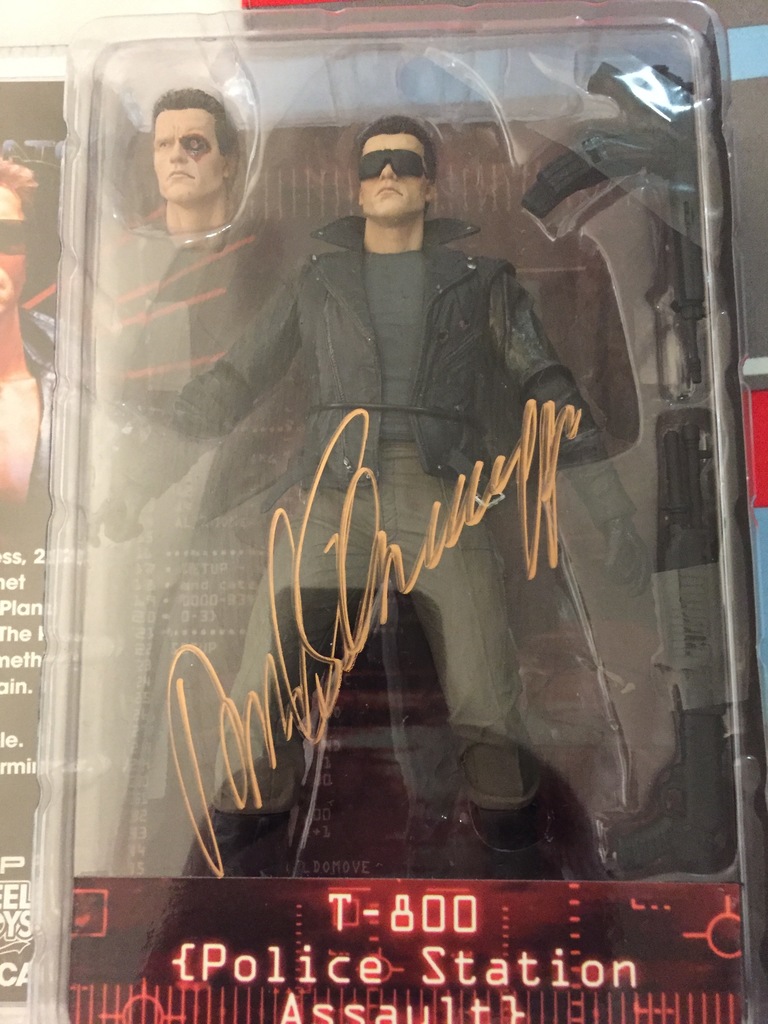 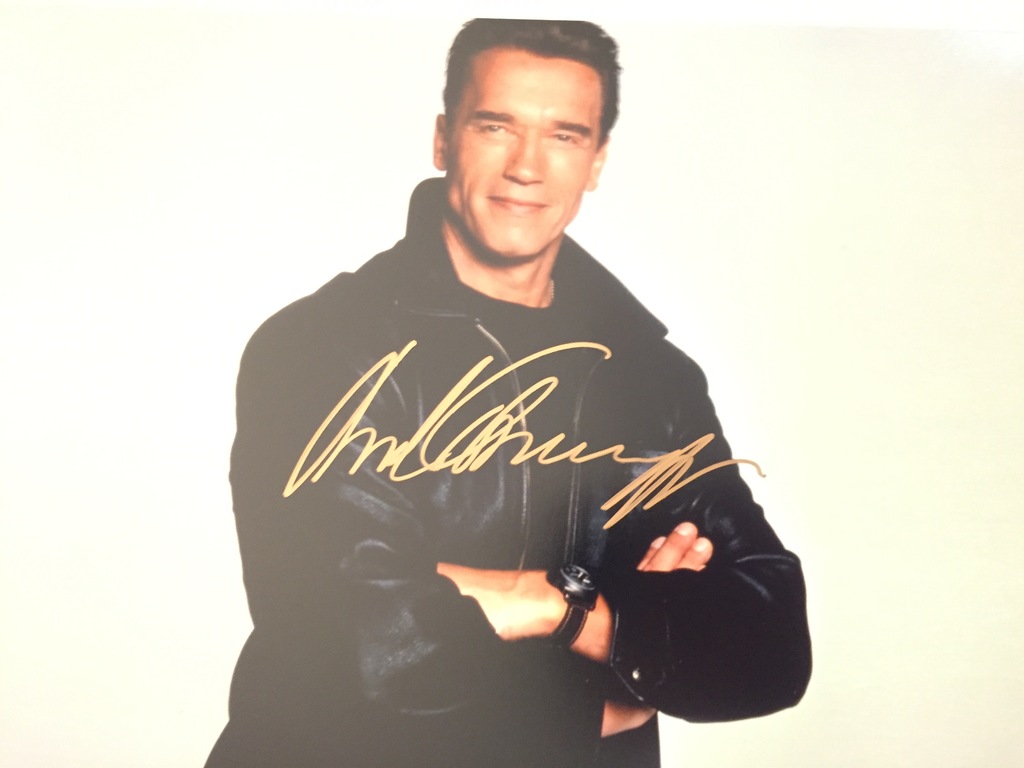 I met Caroline Kennedy in 1993 got her to sign a couple autographs, and she started to ask why I collected autographs. I told her for historic reasons, to trade with friends for something I did not have in my collection.  So she asked me who was my favorite actor, I told her Arnold, and I have never met him to get his autograph.  She smiled and said "you don't have to meet him to get his autograph he signs photos at home"  Just saying what Caroline Kennedy said to me.