Possibly acquiring from a prominent estate and wanted to get some opinions regarding authenticity before I lay out the cash. Thank you.

The ball is a Brooklyn Ball Club Ball which I’ve never seen before and was suspect but as we know the Babe coached the Dodgers in 1938 and Gehrig was still alive.

I agree with Steve. Also the e does not correctly transition to the R as it does in authentic versions. And the shape of the R is strange. As is the curl in the e.

1944. What you've noted are often standard features of his 1944 through 1948 signatures. Every one of these features sometimes appears in the signatures of his final 5 years.

1) I see the parts of the track that are lighter and those that are darker, dictated by Ruth's typically varied pressure dependent upon the pen traveling up or down, or back tracking the line, as to be expected, and common to mostly all his signatures of every era.

2) I see no signs of slower or faster than normal, no shake, no points of hesitation, all fluid.

4) th, again, varies in his later life, as does

5) the baseline, again, the baseline here no further off than dozens of PSA/JSA authenticated and signed official document exemplars from over the last 5 years of Ruth's life.

What I also see is feathering of the ink into semi-porous paper that would be expected if signed in the 40s, accompanied by areas of the track that faded as expected, the areas where Ruth's pressure is lighter in most of his signatures.

"I agree with Steve. Also the e does not correctly transition to the R as it does in authentic versions. And the shape of the R is strange. As is the curl in the e."

I can't reply to him directly because the reply feature is missing. Maybe he's blocked me?

The R is similar in shape to many signed documents and JSA/PSA authenticated signatures of this era, and again, the size and shape of the head varies.

I've got examples of JSA/PSA/et. authenticate Ruths, and checks where the head and curl of the 'e' is almost identical.

The shape of the e to R transition dictated by his spacing between the first and last name, which is sometimes wide, sometimes, and usually more commonly narrow.

Steve, look at the baseline of the "Ruth" on this one. As well as the wide spaced curl of the e to R transition. And the th composition. The baseline suddenly bottoming out isn't uncommon during his last 5 years. 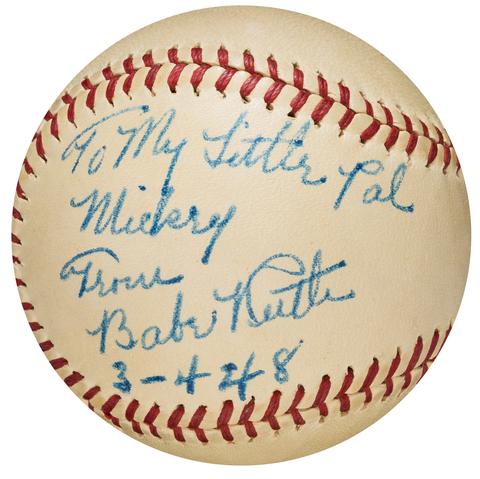 Terrier didn't block you. Nested replies only go a few levels deep before you can't reply anymore. The new platform won't have that issue.

In cases like these I often just start at the top.

Thanks for the advice, Steve

Would be a waste of $300. No chance it is authentic. Save your money. No chance even the incompetent folks at PSA these days would pass it.

Frangiapani was an exclusive autograph auhenticator for forgery rings. He knew exactly what he was doing. Just like the Burzyck COA’s. Real collectors had no access to them back in here days.Burzcyk wasn’t even a real guy that I can see. Pretty sure he was made up and given fake credentials.

You provided a lot of information that I didn’t know about. I’m not experienced enough to participate much in discussion on Babe Ruth. If you'd like to discuss his autograph and things you've observed that would be great.