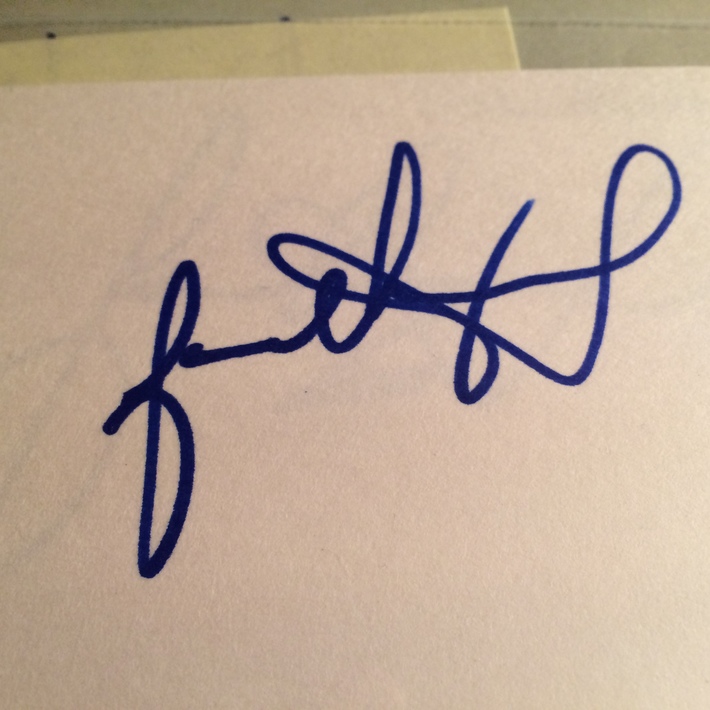 A quick look at these last few signatures posted....Maybe I'm wrong but they look like they may be on the same paper and the same blue fiber tip pen is being used to create each of them.

Etienne, My thanks for your paper and ink observation…..Do you have Jason Alexanders autograph to talk about??

David, that's a very typical autograph by Jason, generally what he signs out on the streets or venues.  He signs a little bit fuller or separated first from last name at private signings, but most of mine are in person from 4 successful opportunities over 3 different venue events in Texas.

Now I'm not good with the ink/slant/slow etc studies of an autograph, and haven't seen where the autograph in question is coming from, nor seen others that Etienne is referring to, but if someone is pumping them out very similar to Jason, than they are fairly good at it.

BTW, I am a huge Jerry Seinfeld & Seinfeld show fan/nut.  My first time meeting Jason when I drove to Houston from Dallas on my bday in 2014 for a venue attempt was the best experience with a celebrity over any other big name out there that I've gotten.  Jason was as nice as could be to all the fans lined up, and maybe it helped that I mentioned it was my bday and hit him up again when has some items to do in silver, and once more with ballpoint, when he was wrapping up pics with fans and asking if he got everyone etc.   He's come down from that level of signing as far my few later hits in DFW but 7 from Houston was amazing! Todd, Thanks for taking a look…..and the back story.