Looking for a signed REVOLVER LP by Paul from 66

a few years ago, perry cox sold a signed Revolver that was signed by Paul in 1966.

Do you know where this item is? I desperately want to buy it.

[Images below provided by member Invest_in_graphs]: 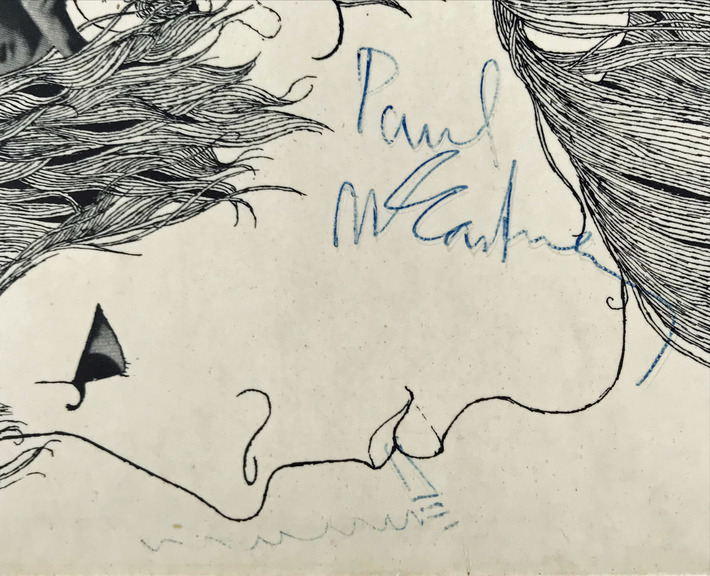 Did Paul examine in depth and think about the AURAIA DMS screen? I don't now, but he's the professional.

Well folks, I've handled many UK original Beatles albums over the years and I've certainly noted that over time, the lamination had a tendency to experience ' some shrinkage ' as the oil base it's made from aged and dried out. And this while retaining it's base adhesive. Small and subtle, but pretty common when I examine many of these old UK laminated covers. The degree of shrinkage depends largely on the conditions in which it was stored of course, but many I see have the lamination shrinkage. You can see the shrinkage most evidently when viewing the cover the back where the front cover flat was folded around the black slick resulting in the early style " flaps " (or flips as some call them.) At the edge of the flaps, I often see a 1/16" pull back (give or take) of the lamination from the edge where it once was in the early life of the cover. So, one possibility here is that the ' underprint ' shadow now being seen under the signature areas, and are now viewable shifted exact copies and placement of the script, are now visible as result of the lamination having been shifted exposing the copied impression below. And since the signed ink script was exactly directly above the transfer initially and likely for many years following, that light ' carbon copy ' effect is now in plain sight. It's clear the cover has vintage and proper ink, stroke and flow above these areas. It's also clear the ' exact light grey copy ' below it is thinner which would be the case as the lower layer wouldn't have as deep a groove as the upper being the point of initial pen contact. This may well be what we see here.

I mean, WHO would trace a signature perfect ' just to the side of it ' !! Nobody... They would trace OVER it... and the ink has no sign of the typical trace attempts.  Since the shrinkage of the lamination on the old UK covers is a fact, this is likely the explanation for the effect resulting that we see on the cover today. Over time, it could separate even further depending again, on how it's stored. It has been a good while since I sold this album and I don't remember it being a noted factor at the time. May have happened more since.

Thank you for your insight as always Perry! At first I felt some type of trace or overwritten, but then said it might have something to do with the lamination.

I always wondered why The Beatles tended to sign on the reverse, but makes sense when the front lamination makes it harder to write on in pen...And now we can see can make some weird imagery.

Yes... like an exact, but narrower base copy. Those old covers can and do shift a bit with time and age. Take care Adam.

What are the chances of the McCartney fading completely like the Jane Asher inscription.

More likely it was rubbed off than faded. But different inks have different fade factors so that is possible.

Thanks, Perry! UK covers signed on the front are RARE, even single-signed. I haven't seen one in person and I wasn't familiar with what you attribute this to.

Nothing can touch an experienced expert who has seen similar pieces in person.

We really appreciate that you took the time to give your opinion.

Thank you Steve. My pleasure.

I still want to buy it

Why do you want it so much?

This signed album is as good as roached!