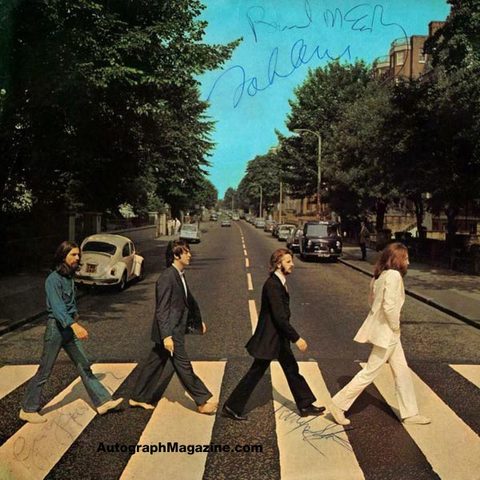 It's been 5 years since we published our first Band-Signed Beatles Album Census.

It's time to update it!

A history of full-band-signed Beatles album prices would be hugely helpful to the marketplace as well, going back as far as we can, so let's build that, too. Not just from auctions, but reports from collectors and dealers who have sold them.

For starters, please read the 2011 Census, which had a few years of updating and other input added by collectors and dealers.

Add your research and commentary to this discussion for now, and as we get more data, we'll post two separate discussions to fine tune it. Once we feel comfortable with the information we have and what we have determined, we'll publish reports that will help collectors and dealers worldwide make better educated decisions on Beatles album sales and purchases.

These are the results of the 2011 census:

I have to say up front that I am not a really high-end buyer and wouldn't dream of spending $50k plus on an autographed item unless it was something of real historic importance and worthy of a cabinet in a top museum.

That said, I agree with Bertrand that the sub-$70k Sgt. Pepper seems better value than the $90k-$100k Abbey Rd, even though I actually prefer the later signatures for some reason.

For $90k I'd expect some more details as to how, or at least by whom, the Abbey Rd signatures were obtained and, like Dan, I'd expect the seller to get the spellings of the album and authenticator right and to include the Tracks letter.

Speaking of authenticators, I thought that Frank and Tracks were now only autheticating their own items, a strange practice in itself really. If you're selling an item as a top-flight dealer can you do anything other than say it's authentic?

Final point and slightly off-topic: I really do wonder how reliable the authentication of a late Lennon can be without some form of provenance. The Lennon that Tommy posted bears similarities to the Abbey Rd one but there are also plenty of differences - most particularly it looks rather stiff by comparison. I'm not saying that either of these Lennons is not authentic and even if I did it wouldn't matter as Frank has given both the OK.

it was never sold, the listing was closed and then re listed at a higher price, thus the $148,000

Why is it listed at that when it sold?

I bought that for $500 on e-bay back in 2006. It came with provenance dating back to the very early 1990's, just not a letter from Frank or Perry etc.  Because it had showed up pre-internet I figured there was a chance it was legit. Turned out the e-bay seller was an acquaintance/friend of Yoko's. If the seller had done more homework and paid for a Frank letter he definitely could have gotten more then $500. And in my mind it does look pretty similar to the Lennon Abbey Rd. sig, which was why I posted it.

And Eva..... to finish this story up. I've been dealing with Frank for 15 years, Both buying and selling. And last year I came on here to put up a beef about him. I sent a few items to him to sell and then wasn't paid. Turned out it was a big misunderstanding. His e-mail address we had been using for years to communicate was an AOL one. So after years it became hit or miss whether he would receive messages on it. It got resolved. There was never any intent to deceive. It is just technology is changing so rapidly and that account was stuck back in the ice ages. But - at the same time I bought that signed Lennon photo on E-bay....2006...well I also bought this on E-bay. From an estate sale. The seller was very clear. I just bought a bunch of items from an estate and this rock/Beatles item was included and I have no idea if it is real. So no promises. And the opening bid is a buck. I ended up buying it for 3K. I took a chance. Sometimes it works out. Anyway. A year later I sent scans for both items to Frank. And at that point I was convinced the 1979 signed Lennon photo was bogus and the fully signed Beatles item real. Turns out I was wrong. Lennon was real and the Beatles fake. And the Hard Days Night book was done by a forger operating out of Pennsylvania in the mid-1990's. And Frank helped shut him down. And it would have been easy for him to give me a letter because I know him. But obviously he didn't. And he authenticated the Lennon photo before I told him about it's extensive, tracked history. Anyway. This is an small, old photo of the bogus item. Among other things - well Frank told me a huge giveaway was the "R" in Ringo. This forger made it into a huge balloon. Look at it. Way to big. And it was one of his trademarks that Frank picked up on. 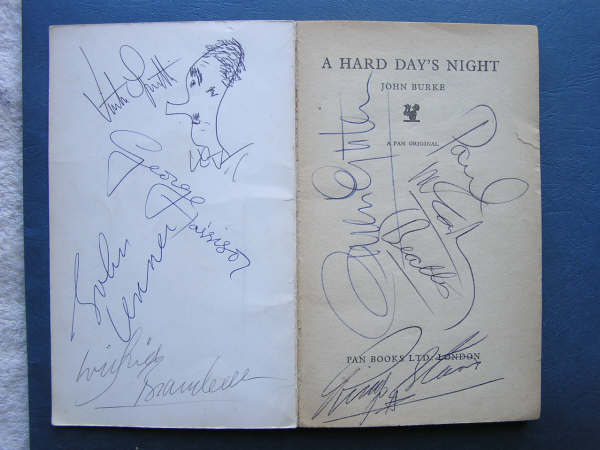 Here's a discussion about him:

Interesting. I knew I was taking a huge chance. But. This e-bay seller was from the U.K. And he was clueless and not trying to deceive - but it makes sense an "attic find" signed in the U.K. would originate there. What gave me most pause however was the signing timing. With all those sigs it most likely was signed at the movie premiere. But was the paperback already out by then.? It would seem more likely a program was signed. And I tried to figure this out but I came to the auction late and was forced to make a choice. Ultimately the wrong one. I will say this however. This guy was a true artist. Not only did he get the sigs close of the 4 but also of Epstein and the others and there is even a drawing and one signature in pencil. He went all out on this guy.

And having gone back through that link one more time....it does sort of remind me of the outfit out of Southern Cali. But it appears this guy got in early before the market took off so people didn't really question a nice fully signed Abbey Rd like is posted in that link. The outfit in SoCal caught the tail end of that. The problem was they flooded the market with sooo many pristine fully signed Capitol albums that it just raised way too many red flags. And so they appeared on the radar screen and ultimately were ratted/found out. And now appear to be completely gone. Unlike Joe Long. Who might still be trying to sneak stuff in. We all have to start somewhere in collecting - so there will always be a lower end market of newbies who think - wow - I love the Beatles and for 10 or 20K can pick up a signed Pepper or Abbey Rd and frame it and put it on my wall. Or just look at it. And to be honest - most people would think we were crazy for spending 10's of thousands for an average one. So 20K for a great one seems expensive but yet a deal. I got into collecting in 2004. But was green as heck. And I visited in Maui in 2004 at a high end boutique of Rock stuff. Signed this. Signed that. Lot of Beatles. But other stuff as well. Then 6 months later I really got into collecting and corresponded with Frank. And all that stuff was worthless rubbish from our SoCali friend. And there was a big website. And I wrote the owner numerous times to no avail. But the kicker and point of the story is. They were posting pics of celebs at the shop who just happened to be passing through. It was a high-end Maui shop. And ultimately one of McCartney standing next to some of that garbage ended up on the site. He didn't know better. He's signed tens of thousands of autographs in his time.

I think I ended up with one of the Abbey Roads you are talking about Tommy. That was even before you started collecting - 1999/2000 time. "Only" £1.7k plus auction fees. Very respectable auction house. Had it framed up nicely and got a lot of pleasure from it for years but as I bought another Beatles at the same sale that has turned out to be dodgy (a signed photo) I fear that I have been admiring a forgery. I won't post it here as I'd rather just not know for sure - the autographs are very convincing indeed.

Not sure I would have believed the Lennon and McCartney in your HDN book by the way.

"Not sure I would have believed the Lennon and McCartney in your HDN book by the way." It was towards the beginning of my collecting. So you believe what you want to believe. Still. I believe these are at least "credible". What sort of ticked me off was not putting the other stuff together. 2 plus 3 doesn't equal 4. I came upon the auction towards the end....but still. Think Star Wars. Huge movie. Billion dollars. And then they put out the book. So no paperback book was signed at the movie premiere for a Beatles movie. It hadn't been created yet. I kick myself now because it is such just an obvious red flag. This wasn't just a fully signed set on a blank page. There was other stuff to go on and I missed it.

And not to dwell on the past too much. But Frank saved me from a couple of bad purchases. Both on E-bay. Including an incredible "signed" album. Both with 30 day money back guarantees. And then a call to him..or e-mail. Oh Man..!!!!! But one thing those did do was get me curious about the whole art of forensic science when it comes to handwriting. And I looked up an "expert" in my area. Turned out she was early 60's and approaching retirement - but still dong some work if you showed up at her house. And she used to travel around and teach FBI agents about this stuff. And I brought one of those items just mentioned and another plus known exemplars etc. And for 6 hours was able to watch her go through the stuff while she was talking out loud during the whole time. It really is a science. I learned so much about autographs and handwriting in just that one day.

You are right, almost all Southern California forgeries from what I was told. And from what I’ve seen.

There would be art and individual autographs from Mick Fleetwood, but he lived on Maui.