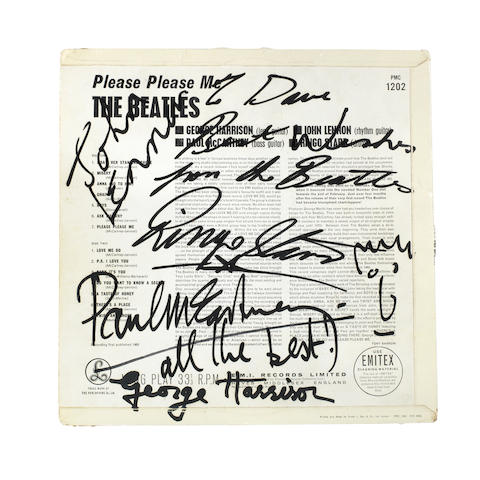 This will be for sale at Bonhams...

It was alledgely signed on the 4th April 1963... but it is a second batch of PPM covers (with the photographer credit on the front not on the far right) which were released... a few months later.

seems to be a second cover as regards the picture of the front on Bonhams website...

I wonder why they did that.

I've only seen one other signed in heavy marker. Frank Caiazzo had it and sold it to The Autograph Source. This piece is amazing. I couldn't find a link, Bertrand, mind posting one?

Strange that the story doesn't pan out date-wise because the autographs look great to me.

Could it be that they printed the two versions of the cover prior to release and decided to release it with the one with the photographer not on the front? He could have gotten his version direct from the publisher pre-release.

Both pressings have the photographer credit on the front. I believe that only the later one has it moved slightly to the left, as it is in the Bonhams image.

Missed all the fun

If the picture of the front, on Bonhams' website, is actually the one of the signed PPM, the latter cannot have been signed on 4th April 1963. According to Bruce Spizer, the second batch of covers (with photorapher's credit far right on the front) have been released only a few months later.

However, the pictures of the record on Bonham's website show a black and gold "Dick James" record, which was the very first pressing.

Either the picture of the front is not the right one (and the story could be true) or it is and there is an issue.

Apart from that, what do you think of the sigs?

I think the autographs are AMAZING and spot-on. I don't have a doubt in the world. I love the album.

If the story is true, there may have been two covers printed. The publishers decided to use the other one for the first release, but some insiders may have gotten this one pre-release.

Do you think that's a reasonable possibility?