In 2017, I wrote some letters to some musicians that I would have a hard time meeting personally. The result was mostly very rewarding!
I was excited about the idea of getting more autographs for my Black Sabbath collection. So, I wrote for David Spitz (who at that time had a Sabbath tribute band) and Dave Walker, a vocalist who spent a few months in the band right after Ozzy left.
The Letter I sent to David S. I never received a reply, however, I received a beautiful letter from Mr. Walker.
It took a while, and I always asked the person who knew him (who had given me the address) if he had received my letter. She told me he didn't even answer the phone!
But, I got my autographs, and, accompanied by a beautiful letter.
I keep these autographs and letters with a greater affection than other items!

Ah! And he also played with Fleetwood Mac 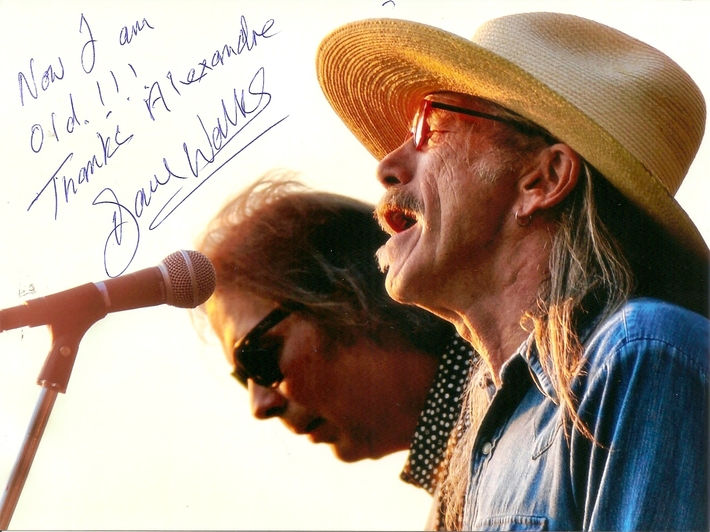 That is very nice! Did you send him a Brazil jersey?

I'm in debt with that! I will not make excuses for my lapses. Last week was his birthday. Even though it is very expensive to send gifts from Brazil, I will find a way to pay this debt!
It was good that I joined this group and you made me think about it!
I'm sure he was happy to remember him with that!

Yeah, I know, I was just joking! Maybe if you go to the UK and meet him in person, sending over the mail is very expensive nowadays!

It's all right! You are right in the attitude you would take. I thought so too, however, I always left it for later ...

He lives in the United States today. I don't remember the state. The ideal is to wait for someone you know to visit the US and take the shirt to an agency so they can make the delivery. Oh yes, it would come out at a good price. When I started my autograph collection in 2014, the value of the Brazilian currency was very high, we lived in a stable and uncorrupted economy. Unfortunately, for the past 5 years, bad people have ruled my country. I bought a lot of autographs from 1 member of this site in the beginning. I think there were 3 big boxes full of autographs, and when my money lost value I started writing to musicians and when I had to sell my restaurant I had time to travel and go after bands in my country. I already left with money because I paid the travel costs with the commitment to take some autographs as an order. But, it helped a lot because it cost transportation, food and a small hotel. These were fantastic years and with many stories to tell. With all this, I gathered more than 3 thousand signatures and in 2020 I won as a gift 1 autograph. I think these times have passed ...

That is an interesting story! Sorry about your restaurant, but at least you got to travel and attend concerts you enjoy! You have very nice photos with metal/rock celebrities, they love touring Brazil! I am originally from Bulgaria, but I live in California and it is difficult to meet the big names such as the guys from Iron Maiden, Guns'n'Roses or Judas Priest, for example. Keep doing what makes you happy! Greetings!

Nothing is by chance!
Thank you for talking to me on this topic!
But rarely, very rarely do I go to shows these days (I went to all of them when I was young). Just when is a small house. I just go to get signatures and then go home.