Magic Johnson good or not

Hi guys,The back story on this piece seems legit but I am uncertain about value. Thanks in advance for any info. I do not own it yet but might be able to.It is a blank page in a school yearbook with…Continue

Van Morrison - real or not?

This cut was in an autograph album that contained cut signatures that were glued into the album.Everything in the album was authentic but I do not know if this one is.Any help?Thanks.Richard SimonContinue

Richard S. Simon replied to Steve Zarelli's discussion How to buy autographs on eBay; Tips to avoid fakes on eBay
"Jackasses come and go. We do our best to curtail them. I have an idea that this same guy hounded me at one point, complaining about our exemplar files, and saying that all our exemplars should be originals and not copies. And other garbage but that…"
Jun 21

Richard S. Simon replied to Steve Zarelli's discussion How to buy autographs on eBay; Tips to avoid fakes on eBay
"I guess we are arguing with a 12 year old on this thread. Bye and say good night to mommy."
Jun 20

Richard S. Simon replied to Steve Zarelli's discussion How to buy autographs on eBay; Tips to avoid fakes on eBay
"Do you assume you are going to get hit by a car when you leave your home? Life means having to take some chances. Educated collectors take fewer chances than un-educated collectors. We can enjoy the hobby without being paranoid about it because we…"
Jun 20

Richard S. Simon replied to BERTRAND DEBARGE's discussion Beatles 65 signed Album with COA
"Why are you shopping in the dollar store when there are reputable places to shop?"
May 18, 2021

Richard S. Simon replied to BERTRAND DEBARGE's discussion Beatles 65 signed Album with COA
"Never heard of them. Can you show us examples of the items that they certified?"
May 18, 2021

Richard S. Simon replied to Steve Zarelli's discussion How to buy autographs on eBay; Tips to avoid fakes on eBay
"If you are a new collector or looking to increase your knowledge of autographs and have thought of buying on eBay, then this video is a must-see. Steve is a very knowledgeable guy and I have been happy to call him my friend for many years."
Feb 17, 2021

Deepak Nahar replied to Richard S. Simon's discussion Magic Johnson good or not
"Neither one is real. "
Aug 28, 2020

Magic Johnson good or not

Richard S. Simon commented on Christopher Williams's blog post Steiner Sports COA Forged Derek Jeter Signed Baseball Ebay Seller Daniecarchi-0
"There should be a way to email these threads to the crooked sellers. Shake them up a bit."
Jan 19, 2020

What kind of member are you? (Check as many as apply.)
Collector, Dealer

What would you like to tell us about yourself, your collecting, or business.
baseball, presidents 1-7, Lincoln, T Roosevelt and JFK

What is your level of expertise?
Professional

What are your areas of interest?
Sports, History/Politics

Why do you collect?
love of baseball and love of history

What is your favorite autograph in your collection?
JFK White House TLS

You can ask anyone living or dead for their autograph. Who would it be?
Mark Twain

A major slime on ebay with a new scam

Just check out this sellers scam.

He thinks he is so clever but he is just a thief.

And look at his past items sold on his feedback list.

Fake Disney autographs items are in the market - BEWARE

I have been offered two Walt Disney signed letters and one memo signed Walt.

After submitting them to Phil Sears I was told they are all fakes.
The text of the letters has been done on a computer (should have been a typewriter) and the letterhead is from 1930's Disney stationery and the letters are dated in the 1950's.

The signatures of course are also bogus.

I have them in a .pdf file and if anyone wants to see what they look like, send me an e mail at…

Hi Richard could you take a look at my babe ruth ball and tell me what you think... thanks in advance Hi, I have this Shaq auto Classic rookie that was bought from qvc in 1993. What are your thoughts on it's authenticity? 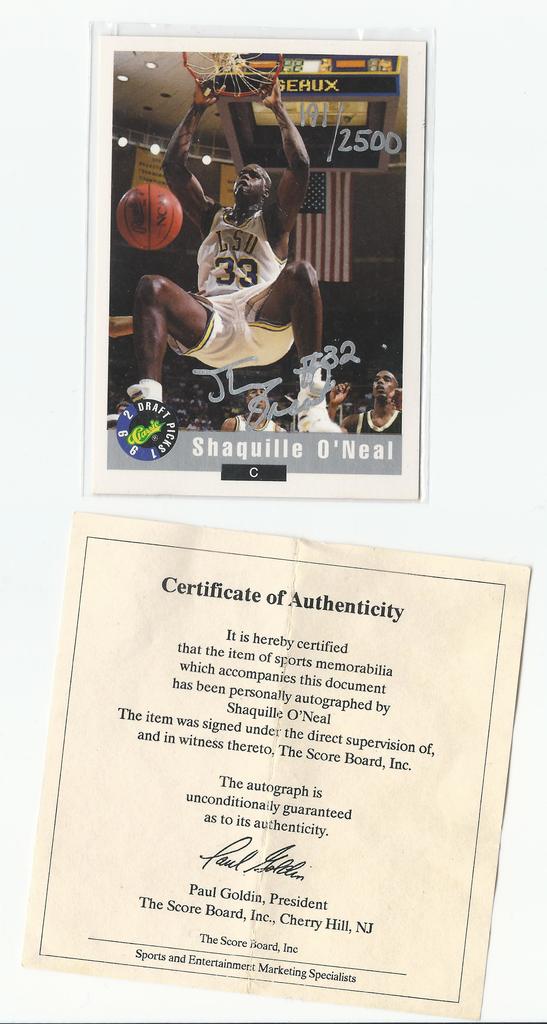