2014- Another year of Football signings

To go along with my new obsession of meeting Rock Stars, I also continued my football autograph collection.  My year started in out in January when a friend and I traveled down to Columbus to the Midwest Sports Spectacular show.  I added a few Buckeyes to my All-American helmet: John Hicks, Ryan Shazier and Tom Skladney.  Maurice Clarett who almost won the '02 Championship game by himself, was also there so I couldn't pass us an opportunity to get him on a SI and ESPN cover. 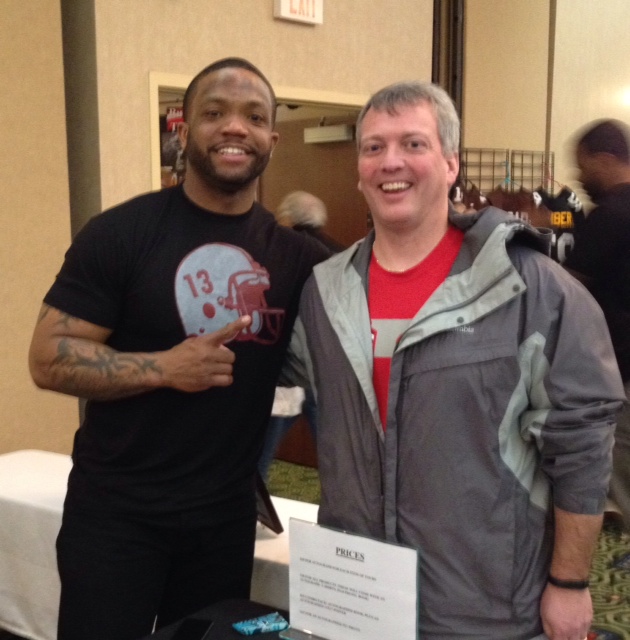 A friend of mine made the usual trek to Chantilly in April (I can't go due coaching).  He got me Lou Holtz, Rocket Ismail, Mike Stonebreaker and Paul Hornung on my ND print and Rod Woodson on my Steelers HOF mini. The next event was the Pro Football Hall of Fame Fanfest.  This was a pretty cool idea that was way too expensive.  I believe admission was $25 and that allowed you to take pictures with HOFers, listen to them talk about their experiences, watch them put high school kids through drills and a few other things.  There were also autograph sessions.  These sessions were haphazardly put together that featured 7-10 HOFers per session.  The price was $300 per session!!  They would have done much better had they done individual signings.  Anyway, I decided to bite the bullet because I needed Joe Namath on my Super Bowl MVP poster.  He usually charges around $200 plus $100 for an inscription.  I justified this price thinking that the other guys would basically be "free".  I also chose not to have my friend get him for me in Chantilly because I wanted to get it myself and besides, I have a lot of money invested in the poster.  Anyway, I go to the venue on Sat. and there are only a few people in line, maybe 12.  A worker announces to us that Joe Namath is sick and won't be able to sign.  That set everyone off, he was really the only reason anyone got that particular session.   /But they did say that we could get the rest of the guy in the session, they would refund our money and we could get a ticket to another session.  Well, that more than made up for it.  I go to the ticket window and ask if I could get 2 session tickets instead of the refund.  The guy looks at me and said that I could have all three.  So basically I got 3 sessions, a $900 value for free!  Sometimes things do work out.  So I ended up getting: Barry Sanders, Franco Harris, Bruce Matthews, Bobby Mitchell, John Hannah, Willie Brown, Carl Eller, Claude Humphry, Roger Wherlie, Ron Mix, Harry Carson, Art Shell, Marcus Allen, Cris Carter, Curley Culp and Paul Krause.  I also ended up getting Ricky Jackson and Floyd LIttle- they both signed as they were taking photos.  Even though I'm still missing Joe on my poster- I'll take those other guys for free! I need Namath, Starr, Montana, Bradshaw and Howley then I'm done with this project!

The Football HOF Induction week happened to take place at the same time as the National that was being held in Cleveland.  I spent some time at the Canton Hotel to see if I could get a couple of free ones, and then went up to Cleveland to get a couple of guys that I needed.  At the hotel I ended up getting: Thurman Thomas, Walter Jones- he signed for 30 min., James Lofton, Charlie Joiner, Lem Barney, Paul Warfield, Curly Culp, Dan Fouts, Curtis Martin, Jack Youngblood and Dan Dierdorf.  John Madden actually signed 2- although I didn't get him and Warren Sapp signed a lot but passed me over at least 3 times.  I also got Jerome Bettis for free as he was signing at a local grocery store.  At the National, I paid for Jim Brown, John Riggins, Randy White, Barry Sanders-needed him on my Heisman Helmet, Eric Dickerson, Rudy and Rocket Ismail. In the fall my friend once again made the trip to Chantilly (he gets whole sale pricing) and I added Lawrence Taylor and Ken Anderson to my NFL MVP helmet and Bob Griese to my QB HOF mini.  My finial two football autographs were 2 former Cleveland Browns- Webster Slaughter and Reggie Langhorn signing their end zone high five.  If you ever played Tecmo Bowl, you'll know what I'm talking about.

Overall it was a pretty good year for autographs- some were free, some I paid.  The expense for some of these autographs and inscriptions is getting crazy.  This is one of the reasons I am slowly moving from sports to rock n roll.  I am willing to pay to complete these projects (Heisman, MVP, SB MVP), but I don't believe I will be starting any new projects anytime soon.

Holy mackerel coach,what a score. Thank you for posting your exploits. You and Josh are a godsend. Actually I like reading about acquiring autographs much more than the never ending is my autograph good stuff or arguing. Thanks again and good luck in 15.

Thanks, guys.  If you keep reading, I'll keep blogging.

That poster looks great, and would be a great achievement once you have it completed.  Keep it up!