Rock N Roll tried to heat up a cold January in Cleveland, and it did!  My first show of the year was Rusted Root.  I didn't plan on going to this show, but my friend is a photographer and he got an extra ticket to the show and asked me if I wanted to go.  Can't pass up a free show!  They were great and the entire crowd was dancing in their seats.  Especially when they played their biggest hit "Send me on my way".  The band still has 3 original members and Liz Berlin and the new drummer met fans in the lobby after the show.  I didn't have anything for them to sign, but then I thought I had my ticket so I had them sign that.  My friend and I decided to go around back to see if we could meet Michael- the lead singer.  We were there maybe 5 minutes and Patrick- the bass player walked off the bus.  He was very friendly, took pictures and signed for the 4 fans that were there.  He said Michael was already sleeping.  That's was fine.  It was an unexpected show, and I would see them again! 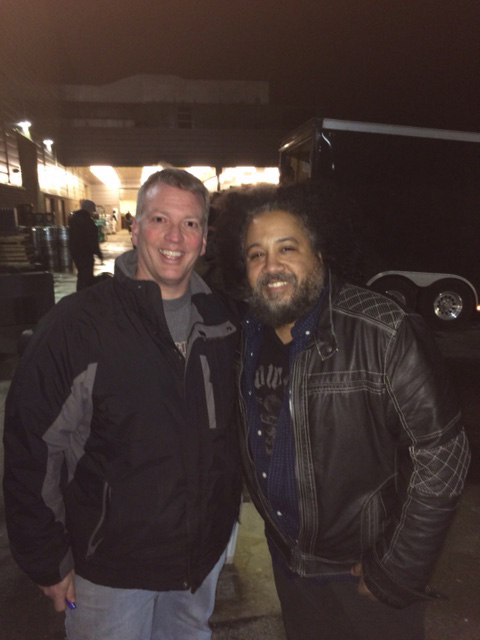 The next week, one of my favorite bands from the 80's- Night Ranger was playing the Hard Rock Rocksino.  I got lucky and bought a front row center seat.  30 bucks- you can't beat it.  My buddy also got to shoot the show, and I actually got a picture of him working.  Night Ranger is a great live band and they totally enjoy playing together as well as interacting with the audience.  They played all of their hits, some Damn Yankees, and a few cover tunes as well.  I ended up getting the set list and Kelly gave me a drum stick too.  I hoped to get a couple of albums and the set list signed from the band after the show.  After the encore, some fans went to get some autographs from the band.  After waiting a little while, the tour manager comes out and said that Jack and Kelly are both really sick and won't be signing.  Hmmm, how funny- he said the exact same thing last year when they played.  Also, if they were sick- why did they play 2 extra songs that were not on the set list? (Boys of Summer and Penny)   Come on, don't lie- just say they don't want to sign.  Someone I know went to the airport the next day and got all of them and he said they were fine.  Anyway, Brad Gillis comes out and comes over and signs for everyone.  Super cool guy and also takes some pictures.  Night Ranger was the first band I ever met back in '95 before I really started getting autographs.  I have met Kelly and Brad before but not Jack.  They said they will play here every year -It was a sold out show, so I will get another chance for those guys again! 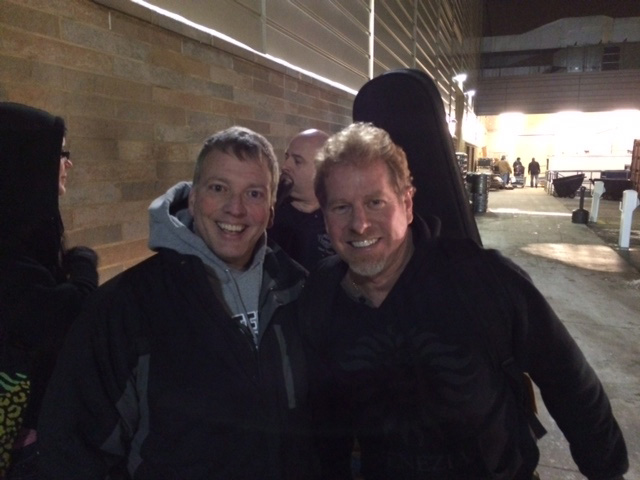 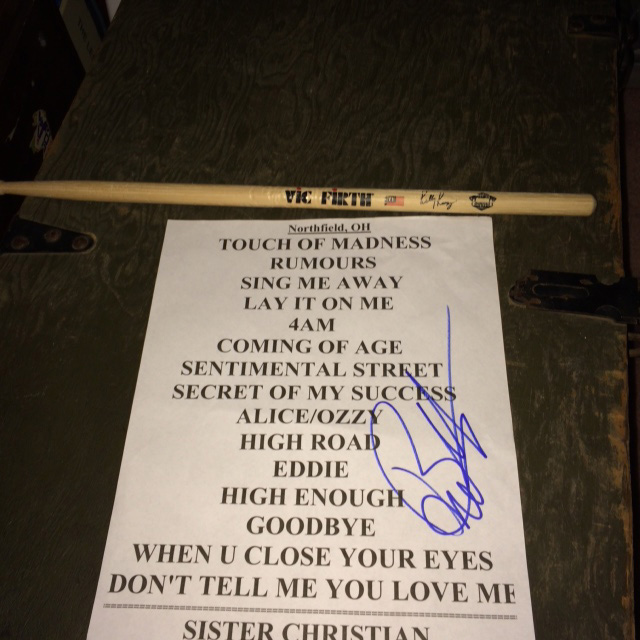 The month ended with one of my favorite artists playing downtown Cleveland.  John Mellencamp!  I have seen John 5 times in the past, the first being in 1985 on the Scarecrow tour.  The show was sold out, but for some reason I decided to look on the theaters web site to see if there were any extra tickets,  knowing sometimes they release tickets late.  I ended up getting a 5th row ticket for face value.  I figured I would never get closer.  Score!

I decided to meet my friend before the show, since I got word on this site that he usually signs before the show.  We had no idea what time he would show up, so I got there at 2:45.  By 4:30 there were a few more autograph guys there.  They found out the John wouldn't get there until 6, so some of us decided to warm up and get some coffee.  We headed back before 6 and there were a few more people there.  About 6:10 here comes a black SUV and John comes out and heads for a silver windstar trailer.  Some guys said that this is his "smoking trailer" since most venues do not permit smoking.  A few minutes later an assistant comes out and said that John will sign for us, give her a few items each and she will get our stuff signed.  Sweet!  I really wanted to meet him because he is one of my favorite artists, but I was happy to get the autograph.  He's up there with Springsteen and Tom Petty as far as I'm concerned.  I ended up getting American Fool and an acoustic mini guitar signed. 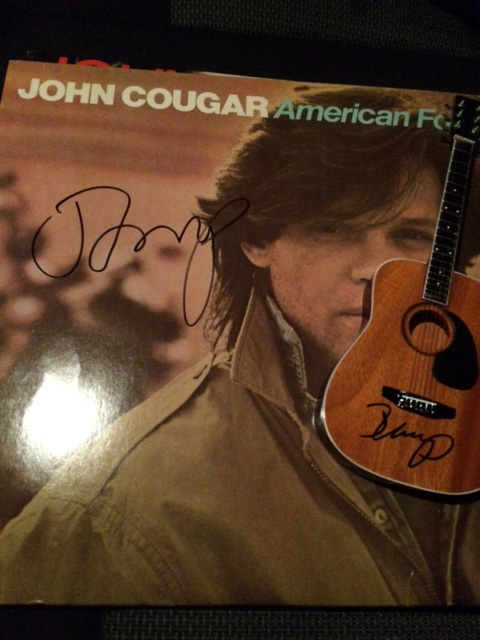 I headed into the venue and took my seat.  I was talking to the guys behind me and we were sharing stories of when we saw Mellencamp in the past.  The one guy had the set list.  He said he knows the manager of the theater and he gave it to him.  I asked if he was going to keep it, he said he didn't know.  I said that I would buy him a beer for it.  He said sold!  After the opening act, I bought him a beer and he gave me the list.  Cool. John came out and put on a heck of a show.  He played some new songs and a ton of old songs.  He came over to my side of the stage a lot and I got some good pictures.  After the show, I went up to the stage and asked a roadie for a guitar pick.  He said NOPE!  I was like, whatever.  Another roadie was at the mic stand, getting ready to tear it down.  So I asked him for one, he looked at me and threw one right at me.  Cool!  The lady next to me asked for one too and he threw one to her and gave one to someone else.  That roadie knows the drill!

I met up with some friends in the lobby and they were headed to the casino downtown.  I almost went, but decided that now I have a set list, why not try to get that signed too?  So I head out back and the black SUV was still there, so John was still there.  About 10 other fans were waiting as well, with only one other guy that was there before the show.  I had one other album that I didn't get signed before the show in my car across the street, so I decided to get that as well.  A few minutes later, John comes out of his "smoking trailer", waves to the fans and gets in the car.  I thought he was going to blow us off.  However the gate to the lot opens, the car pulls out and John rolls down the window.  He said "I'll sign for you guys".  Awesome!  I thanked him for a great show and all the music through out the years.  He said "your welcome" as he signed the set list and the John Cougar album.  It was a great night and a great start to the year! 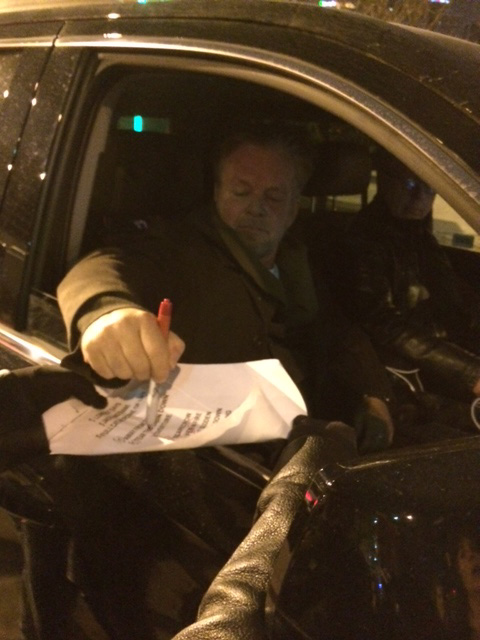 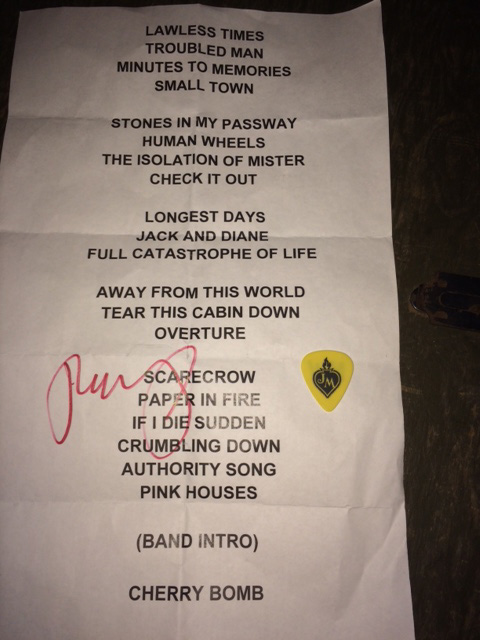 Great blog Coach!!!! Mellencamp is coming here in a month or two and I hope to meet him also. I'll have to look for a silver wind star also. He is one of my one of my all time favorites and I'd put it up there with meeting Billy Joel like I did on New Years Eve and this would certainly be an early highlight for 2015.

Comment by Chad B on February 1, 2015 at 12:01pm
Wow! Great stories. You sound like my kind of guy. I have seen Rusted Root and Mellencamp on many occasions. They are both great. I also got my concert ticket signed after a show by Rusted Root. I hope the rest of the year is as good to you.

Another good one ,keep em coming. I guess John M is a decent signer with out pushy, obnoxious crowds. Nice to hear.