A sit down with Dr. Funkenstein and Chuck D

I have the pleasure of living close to Cleveland and Canton.  Two major Hall's of Fame are about a one hour drive from each other and both institutions put on special events from time to time.  This February, the Rock and Roll HOF had two Hall of Famers come in and tell their stories to fans as well as answer questions from them.

On Monday, the Funk-master General, George Clinton came in to talk about his new book: "Brothas be, yo like George, ain't that funkin' kinda hard on you?".  Which is probably one of the coolest book titles of all time.  George came out singing "We want the funk!" and of course the crowd responded "Gotta have that funk".  What a way to open the program.  George is an encyclopedia of musical knowledge.  He has a great memory and has played with a who's who of jazz, R&B, rock and rap.  Dropping names like Miles Davis, James Brown, Prince, Sly Stone and the Red Hot Chili Peppers.  He spoke about creating characters in his songs.  He said "Characters last longer than people, you can renew characters but people die."  He also talked about creating the "mother ship" which the Rock Hall has the original drawings.  This was the first time that something like that was put on stage.  It was a great interview and I learned quite a bit.  His best quote of the night was "if you don't like the effect, don't produce the cause". 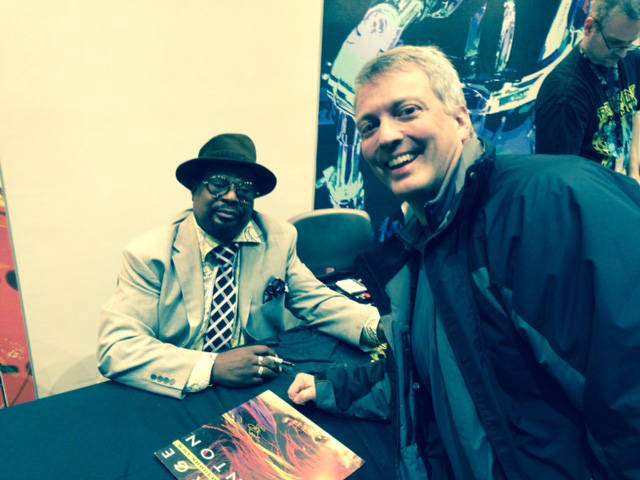 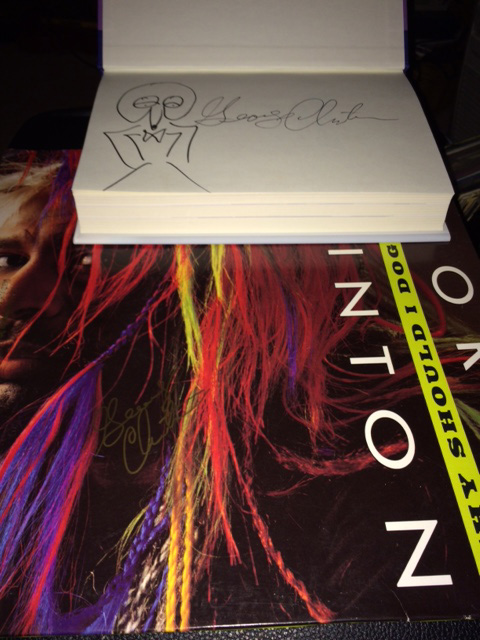 After the event, he was signing his book and new CD's.  The staff said that those two items would be the only things that he would be signing.  Well, as long as you had a book or CD, George would sign anything that you put in front of him.  I ended up getting an album and my HOF poster signed as well as his book (I asked him if he would draw the Atomic Dog and he did).  He was very friendly and I'm glad that I attended this free event.

On Wednesday, the Rock Hall brought in Chuck D as a part of their Black History Month and Educational Program.  This was also an interview and Q&A with the audience and another outstanding program!  What an articulate and well thought out person.  Chuck talked about how he started out as a DJ and eventually made his way into rapping.   He also spoke of Public Enemy's influences and how they wrote their first 3 albums.  One of his key points was that "music is the message of freedom", and how important it is for local radio stations to play local artists.  He said that 25% of local programming should be local artists because they are the one's that know what is going on locally, not these national acts that are basically controlled by 3 companies.  Today, it is more important on how you look than what you have to say.  He said it's like a basketball player that can dunk but forgot to put on his shorts before the game. After the interview and Q&A, Chuck said that he would sign anything we had.  He even brought his own pictures, which he gave out for free.  He was one of the coolest Hall of Famers that I have ever encountered.  He actually took time and talked with with each person in line and took a interest in what they had to say and answered questions.  I asked why he always repped the Pirates when he was from New York?  He said growing up he loved Roberto Clemente because he was a great player and a great humanitarian and that Pittsburgh is a great city.  Although there were only about 30 people in line, it took more than 45 minutes to get through.  This was time well spent!  Chuck looked at my poster and was pretty impressed with who I had on it.  He said "man I don't want to "F" this up, so I'm just gonna sign this right here in the corner".  I told him that he could sign it where ever he wanted.  I also got a nice 8x10 and the free photo of Public Enemy signed. Some people say that groups like Parliament Funkadelic and Public Enemy do not belong in the Rock and Roll Hall of Fame.  Chuck D had a great response to this.  He said it's like the Baseball Hall of Fame: you don't expect the same things from a second basemen and a right fielder because they are two different positions, yet they are a part of the same team.  He said it's like the same thing for rock.  You have soft rock, hard rock, metal and rap- they are all a part of the same team and rap is like the 2nd basemen.  You have to put the best 2nd basemen in the HOF.  As far as he's concerned, RUN DMC and Public Enemy are the best at their position and therefore they belong.  I totally agree!! 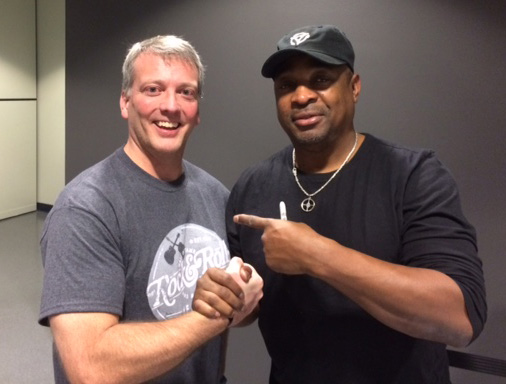 Shame some of these guys are actually pretty nice but get a bad rap.

This is awesome! I live two hours away from Cleveland and miss everything haha! Congrats!

Oh I forgot to ask, who all do you have signed on the poster?

Very very nice! No wonder Chuck didn't want to mess it up! haha

Being born in 1957 outside of Cleveland, Ohio was the ultimate blessing to a music lover. Everyone played Cleveland even the Beatles. All the world series of rock shows. Seeing Pink Floyd for the first time at Kent State in 1971. Even going back to WIXY 1060am shows.. Great town, better memories! Scott