My autograph adventure of 2014 began in February when I decided to see Peter Buck and Alejandro Escavado at the last minute. I have been a fan of REM for a long time and I got to see them a couple of times over the years. My chance to see a hall of famer up close in a small venue for $20 was an opportunity I couldn't pass up.  I wasn't really prepared for autographs, as I didn't get any vinyl and only brought 1 REM cd cover and my RnR HOF poster.  I had no idea if they would sign or not and it was a cold and snowy night and I really didn't feel like standing out by the bus.
Anyway, Peter Buck’s band opened up the show and Peter only played rhythm guitar-no lead. And it pains me to say, but they were terrible. His lead guitarist was sloppy and didn't know how to end a song. They didn't even play 1 REM song.  I was so disappointed.  Alejandro came on stage next, and once again Peter played rhythm for him.  I was pleasantly surprised with this set. At the end of the show, Alejandro said they would sign for people in the lobby. Sweet! I didn't have to wait outside.  There were 20 or so people waiting at the merch table and Peter was great, signed anything that anyone had. The guy in front of me had 8 REM lp’s and he signed them all.  I got my items signed and got a picture with Peter.  Good start to the year.

My next show wasn’t until May when Dave Mason’s Traffic Jam came to Kent.  This was one of the better shows that I have seen in a few years.   He sounded great and his guitar playing is awesome.  To think that he wrote “Feeling Alright” at 19 is pretty incredible.  He also signed for fans in the lobby after the show but requested that no photo’s be taken due to his eyes.  I got a poster, solo lp and HOF poster signed. Next up was John Sebastian from the Lovin Spoonful in June.  John played the same venue as Peter Buck- The Kent Stage.  This is a converted movie theater that holds about 675 seats.  The acoustics are great and they have brought in some decent acts over the years.  John played all the hits except Welcome Back.  What’s up with that?  His voice wasn’t in great shape, but his guitar playing was on point.  He also graciously signed for everyone in the lobby after the show. Now it’s summer and I am rolling.  I was a good 3 for 3 and I continued my hot streak.  I proceed to see and meet the Kenny Wayne Shepherd Band, Cheap Trick, Slash, Yes, Jefferson Starship, and Donnie Iris.  I was 9 for 9 and feeling pretty good.  The Turtles Happy Together tour hit the Hard Rock Rocksino.  I did get Flo and Eddie and Mitch Ryder but Mark Farner and Chuck Negron blew off the 4 or so people that were waiting.  Another blow off and no acknowledgement to the fans was from Pat Benatar.  She and her husband made a B-line to the bus.  Another miss came from Buddy Guy.  I can’t say he refused to sign because he actually left the venue while his band was still playing.  I totally missed him! 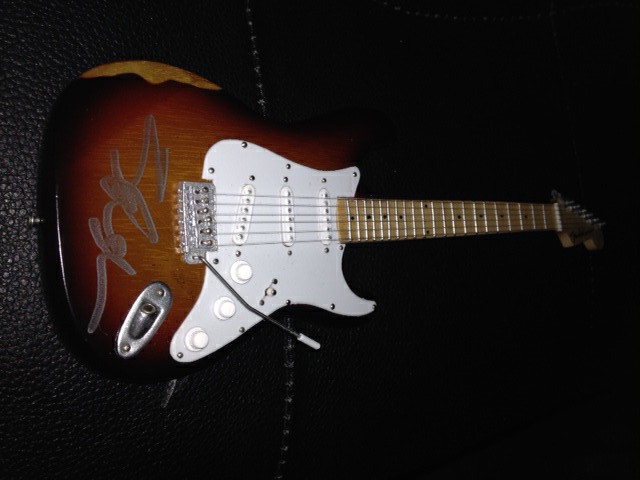 Things picked up the next week when I got Kevin Bacon after the Bacon Brothers Band show in Kent.  I was one of the 5 or so fans who got him before he went on his bus.  Another good get was Alice Cooper.  I almost left the hotel where I heard he was staying, but my friend convinced me to stay.  I’m glad I did!  He was so cool and signed for the 3 fans that were there. I got free tickets to see Survivor at the Rocksino.  You can’t go wrong with a free concert and hearing Eye of the Tiger.  Both singers and the original guitarist signed for the few fans that were there.  They were awesome and took pictures with everyone.  This unfortunately was one of Jimi Jamison’s last shows as he died the following week from a heart attack.  I wish I would have gotten a picture with him. I did get to meet and get my picture taken with Kiss although I did not get an autograph, it was an awesome experience.  Summer turned to fall and it was hit and miss with some of the artists.  I wrote about getting Bret Michaels, meeting but not getting Jackson Browne, getting Graham Nash but getting blown off by Don Everly.  Eddie Money was great, Joe Perry only signed his book.  No Todd Rundgren, Peter Wolf or Chrissie Hynde.  JD Souther was a gentleman but the guys in Blue Oyster Cult blew off the 3 fans waiting in a light rain.

It is now winter and I ended up getting Jeff Pilson from Dokken, Jack and Jorma from Jefferson Airplane, Steve Hackett and Lita Ford.  This is definitely a summer hobby in Northeast Ohio.  But, if you are willing to stand out in the cold, the artists may come over.  I ended up getting 23 out of 34 artists that I tried for.  Almost a 68% success rate, not too bad I guess. 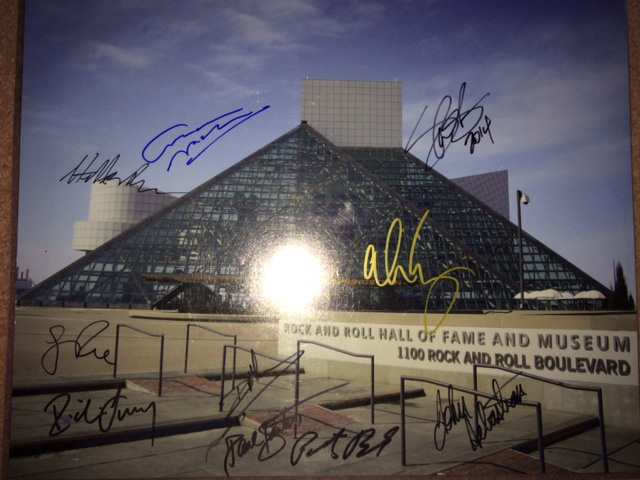 I am looking forward to 2015 to see who I will meet and also see what new friends I can make.  So far I already have tickets to Night Ranger, Mike and the Mechanics and the Rock N Roll HOF Induction ceremony.

Good read and good luck in 2015 I look forward to reading about your exploits. I used to do the same thing and still go to concerts in smaller venues and get sigs if they come out to the lobby. At the British invasion show billy j Kramer, Chad (minus Jeremy) denny Laine, Mike Pender and one other all lined up and signed after the show. I heard they didn't always do this (Bethlehem Pa Sands casino).My next concert in Beth is Hall and Oates, they usually have signed cds for sale in lobby.

Yes were great!  Steve Howe came out of the venue wearing a bathrobe and went to the tour bus.  After a few minutes on the bus (and changing) he came out and we asked him to sign.  He said they had a meet and greet after the show and "it will be ages before we are done".  That didn't sound too encouraging but the 10 or so fans waited it out.  Steve was the first one to come out after the meet and greet and said "ok, I will sign but please no photographs".  No problem.  He signed everything that people had, and then got into a car and left.  The rest of the band came out, and they were in a great mood.   They all came over and signed and took pictures except for Allen White.  He went right into a van and waited for everyone to get done.  Someone approached the van and asked if he would sign and he said no.  I ended up getting Geoff, Chris and Steve.

Ian, the British Invasion tour is coming to Kent in March.  I hope the guys sign in the lobby!  I have 2 Wings albums and I picked up a Peter and Gordon album as well.

That was a fun story to read. Cool stuff.

Comment by Tim Henderson on January 8, 2015 at 5:05pm
Let us know about the r n r hof heard it's pretty tough there due to so many graphers!!