The Runaways, the first all girl rock band that played their own instruments featured two members that also had break-out solo careers.  Joan Jett was the first to gain recognition with her 2nd solo album "I love Rock N Roll" as well as various other hits and cover songs through out her career.  I always liked Joan and her big eyes and punk attitude.  I got the opportunity to see her open up for the Kinks back in 1987 and she put on a great show.  I never got to meet her, but I hope to this spring when she gets inducted into the Rock Hall.

Lita Ford was the other break out star.  She had a few early MTV hits such as Gotta Let Go, where she played a housewife, doing dishes in the video until some robbers break in and she takes care of them with her leather outfit and electric guitar.  It's total 80's cheese and I love it!  She of course had two big hits in the late 80's with Kiss Me Deadly and Close Your Eyes Forever with Ozzy Osbourne.

Lita headlined the Rocksino last night and I couldn't pass up this show for 20 bucks.  I must say that she looks great for any age, but I couldn't believe she is 56! 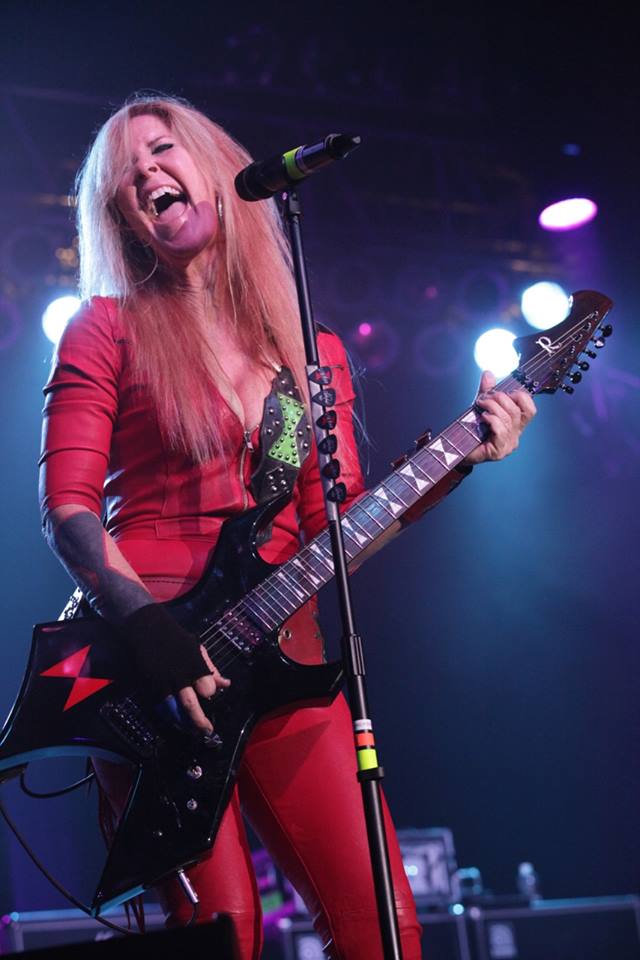 Before the show, I was hanging out talking with some friends of mine.  I noticed some people were lining up for a meet and greet while the opening band was playing.  I asked how you could get a meet and greet pass and the guy in charge said it was basically for the "high rollers" at the casino.  Well, I guess I'll never get one of those!  I noticed that some people brought some vinyl and cd's for her to sign.  However, when people were coming back from their photo op, they said that her manager told them that she wouldn't be signing anything-just taking pictures.  This did not look good for after the show.

She played a solid 15 song set, which was a few songs longer than what she has been playing.  Maybe because this show was streamed over the internet.  There was even a drum solo!  It was an 80's flashback!  After the final strands of Kiss Me Deadly were played, I headed to my car to get the 2 lp's that I hoped to get signed.

There ended up being 12 people hanging out by the vans waiting for an autograph.  It started to get pretty cold and a very light rain started to fall.  After about an hour after the show, the band came out and loaded into the van.  A couple fans called out to them to come over but they didn't.  I thought for sure Lita was going to blow us off as well.

Low and behold, she comes out.  We asked if she would sign and she said "Sure, let me put my s*** in the van and I'll come over".  She couldn't have been more nice.  She signed everything for everyone, except for the one fan who had a pick guard.  She said "Sorry, I don't sign pick guards".   But she continued to sign everything else, even a full sized guitar.  She was talking with fans, answering questions and taking pictures.  She spent about 10 minutes with us and took care of everyone.  Even though she said 'let's hurry up, I'm freezing". I ended up getting my two album's signed and ended a great year for meeting rock stars.  I'm glad Lita didn't runaway from her fans!  Class lady. Nice blog! I hope she is just as nice in April when she plays close to me! Very interesting she wouldn't sign a pick guard but would sign a guitar but last year Jake E. Lee said the same thing which I don't understand at all. He signed a guitar with a nice slow autograph and even added Bark at the Moon and drew a moon and then added Ozzy Rules to guitar and the few of us familiar with autographing knew it was going right up on Ebay. He was very adamant about NO pickguards stating he sees them up on Ebay. I have met Lita a few times and she's always been nice to the fans! I actually have the banned version of the LP Out for Blood signed by Lita Ford but the purple version is cool too!

Another good read and a classy lady. Managers ,body guards and even bus drivers over the years have all lied to me that the star will absolutely not sign. I think THEY don't want to get held up.