Two Guitarists and a Bass Player

Another good week for music and autographs in the Cleveland Area.  Last Saturday, two original

members of Jefferson Airplane- Jorma Kaukonen and Jack Casady, also known as Hot Tuna hit the Music Box for an acoustic set of blues based rock.  Although I didn't have a ticket to the show, I decided to go up and see if I could get a couple of autographs from these legendary Hall of Famers.  The Music Box is a great venue that has two levels and two stages.  The first floor seats about 150 and the upstairs holds about 750.  I got there for the start of the 2nd set (I didn't know they would play 2 sets) and decided to grab a beer and listen to a great local band on the smaller stage.  After a little while, I noticed the crowd dispersing from the upper level and saw this as my mark to go up to the merch table and see if the guys would come out and sign.  I brought my Volunteers lp already signed by Kantner, a new reissue of Surrealistic Pillow and a mini guitar.  I went upstairs and saw a couple of familiar faces.  A couple that I have seen at a few shows were there to get their guitar signed.  I was talking with them for about 10 minutes when the manager came up to me and said "The guys are in the backroom with friends and family, but give me your items and I will get them signed for you."  Wow!  I didn't even have to ask-that was a first.  I see the manager head to the backroom- he opens the door and I see Jorma standing there talking with some people.  The door closes and a few minutes later, the manager comes back with my items signed. 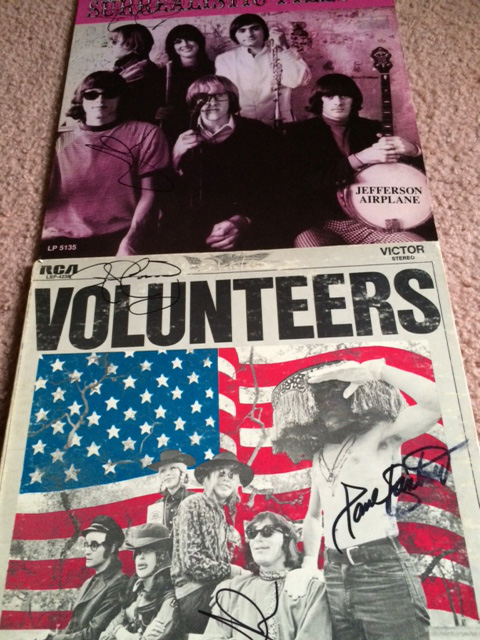 That was awesome.  Even though I didn't get to officially "meet" the guys, I know I have authentic autographs.  Jeff and Marlene also got their guitar signed.  They decided to wait around and get a picture with the guys, but I decided to take off.  I see that Jefferson Airplane is playing in Cleveland in March so I will try to add Paul to the mini guitar and album.

Steve Hackett brought his Genesis Revisited tour to the Hard Rock Live on Wed.  This was another situation where I didn't have a ticket and decided at the last minute to go.  I ended up scoring 8th row center stage tickets worth $90 for $30!  I ran into someone who couldn't go and was willing to part with these beauties for a fraction of face value.  I love when that happens.  Steve and the band sounded great and played a lot of Peter Gabriel era tunes including the entire 22 minute Supper's Ready.  However they "only" played 2 hours and did not play 3-4 songs that they have been playing on this tour including my favorite "Squonk". 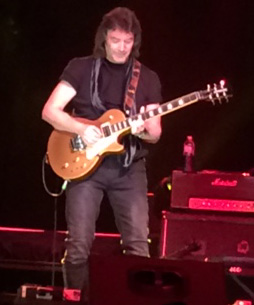 About 6 hardy souls waited out in the cold for the band and Steve to come out.  I have heard from others that Steve is a great guy and is very generous with his fans.  After about 40 minutes, Steve comes out and says "Are you guys waiting out in the cold?".  We asked if he would come over and he said sure.  He was very nice and signed for everyone and answered questions.  I asked why Squonk wasn't played tonight.  He said that the Casino asked him to cut his setlist down a little so that people would be more likely to gamble.  Man, thanks a lot Hard Rock!  If an artist wants to play for 3 hours, as long as it isn't past cerfew, let them!  He started at 7:30 and ended at 9:25, clearly early enough by anyone's standards.  Anyway, as I got my items out he said "Oh look at this little Les Paul, Cleveland sure likes their guitars!"  I said we sure do.  He proceeded to sign my Trick of the Tale lp and added his name to my Rock N Roll HOF 16x20.  Another great e xperience from a Hall of Famer.

The good news is Mike + the Mechanics are playing the Hard Rock in March so I will try to add him to the guitar and lp as well.  And the beat goes on.... 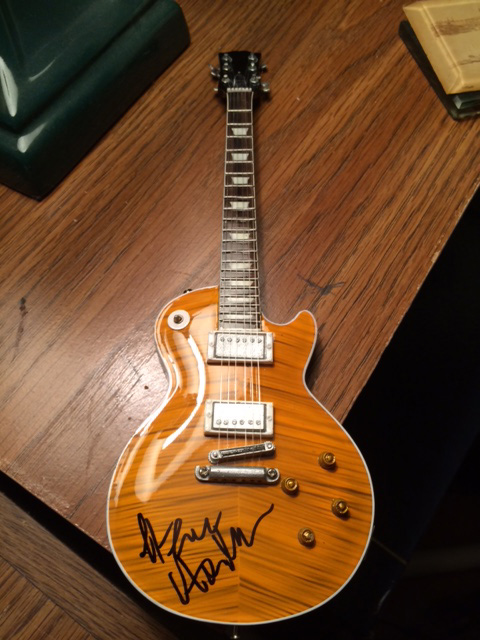 Great story! Although...I wish you guys would stop with the guitars! They usually hate signing them and it turns them off on the others waiting with their LPs.

Hot Tuna was great at signing. They seemed reluctant, but signed for me a few years ago. I went to the show, and couldn't resist buying a shirt from the merch booth. Not just because they were nice enough to sign my Hot Tuna CD (didn't bring Jefferson Airplane stuff, as it would be incomplete without Grace and the boys)....the shirt said: If you don't know Jorma, you don't know Jack!!!

(always loved this band, but found the name "Hot Tuna" a bit...gross)

I didn't know bands/artists didn't like signing guitars.  I have a few mini guitars, they are about 10-12" in length.  It's too expensive for me to have real guitars signed, and I also don't have the space.  So far I have not had a negative comment or have an artist refuse to sign.  This year I have gotten Rick Nielson, Slash, Jorma and Jack, and now Steve Hackett.  I would think they would be more apt to sign a mini guitar than a pick guard.  I think it's unique.

I think I would have bought that Hot Tuna shirt too, if I would have seen it.  I'm hoping one day to get Marty and Grace on those Airplane albums.  I know Grace doesn't like to travel, but you never know when she might make an appearance.  That's what makes it fun.

Love your blogs! This is much better than going on here and seeing 50 posts on "Is this real" because I used to subscribe to the magazine and loved the articles. Jeff Beck signs but if he sees a guitar anywhere near him the autograph signing is over regardless of how many are waiting. I know a guy that gets guitars signed here and I have witnessed a few that won't sign them and have even blown everyone else off because people were waiting with guitars. What real fan waits with a guitar? Cd's Lp's and books are usually great because it shows you've supported the artist. Artists automatically assume "EBAY" when they see a guitar. The guy I know who comes out with a guitar is a seller and he tried to get Justin Heyward of the Moody Blues to sign one before a recent show and he refused and then refused to sign for everyone else after the show too and snuck out a side entrance to avoid the 10 people who were waiting for him. Keep up the great posts.

Thanks Brian!  I have only been collecting music autographs for about a year now, so I am still learning.  I did order 2 more mini guitars- an acoustic and another les paul.  I will make sure I won't ask Jeff Beck to sign it if he comes to town.  I also will ask the artist if they mind signing a mini guitar, before handing it to them.  I am not about to make anyone mad.  When I saw Slash this past summer, I have never seen so many full size guitars in my life.  Out of the 40 or so people there, I would say there were 18 full size guitars!  I was happy to get my lp signed.

Thanks for the stories, they remind me of my former times waiting outside hoping for a graph.

Awesome story! Thank you for sharing!

I meant that Jefferson Starship will be playing Cleveland in March.  When I saw them this past summer, Paul Kantner said he was talking with the Jorma and Jack to see if they wanted to do a 50th anniversary tour.  We'll see what happens.