Another Week of Rock

Four different classic rock acts came through NE Ohio last week and I decided to go to 3 of the shows.  First, Todd Rundgren came to Kent for "An Unpredictable Evening".  I'm not a huge Todd fan, but I do like his music so I decided to take a chance to see if anyone had an extra ticket to this sold out show.  Luckily,  got a $40 for $30 ( I love not paying full price).  Todd and his band sounded very good and played a variety of

cover songs including 96 Tears, Muskrat Love, and Fire.  He also played some

Utopia songs as well as his hits, I Saw The Light and Hello It's Me.  After the show, a surprising 40 fans were waiting to meet Todd.  Most of them had met Todd before and were talking about how nice he is and how he loves his fans.  Well, after standing outside in the cold for about 90 minutes, a woman comes off of the bus and said that Todd had already left and was visiting a friend in Cleveland.  How nice, she could have said that an hour ago and saved everyone their time and effort.  Everyone left disappointed- so I'm 0 for 1.

The next night, Akron's own Chrissie Hynde of the Pretenders came to town and played The Akron Civic Theater.  I am a fan of the Pretenders and there is always the extra special feeling when a home town person makes it to the big time.  The only other time I saw the Pretenders was when they played the Concert for the Rock Hall back in '95 a 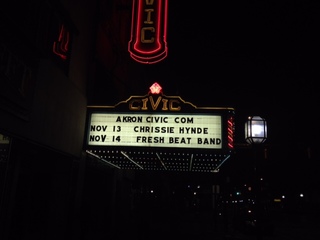 t the old Cleveland Stadium.  This time she came as a solo artist playing "A night of Pretenders and Stockholm" (her new solo record), and she did not disappoint.  Once again, I was looking to get in on the cheap and managed to get a $55 ticket for $40.  People seem to always have extra tickets and I am more than willing to pay less than cover price!  Chrissie and her 4 piece backup band went through a bunch of Pretenders songs as well as a big selection of her new record.  Through out the course of the night she would make references to Akron saying how the city is looking good.  When she went into "My City was Gone" (my favorite) she said- "This is a song about Akron" and after that she said "here's another song about Akron, actually they are all about Akron!" as

she went into "Downtown".  It was a very good show and I'm glad that I decided to go.  A friend of mine got to meet Chrissie before the show going to sound check.  He was the only one there and she came over to him and signed 3 albums for him.  He said she was very nice.  I thought I was in luck for after the show so I brought 2 lp's.  I noticed at the merch table, they were selling her new vinyl album signed on the cover for $60 which also included a cd (how many people actually have record players?).  I thought that was an ok price but I decided to pass, hoping to try my luck after the show.  I ended up being the only one waiting for her on a very cold night.  She eventually comes out after her meet and greet and gets right into a waiting van.  I'm not sure if she saw me or not because she got in so quickly.  Damn 0 for 2.  However, I got a hold of my friend Todd who got her before the show and ended up trading for the Extended Play album signed by Chrissie.  Even though I didn't meet her, I still got something signed and it didn't cost anything out of pocket.  Score!

Saturday night, JD Souther came to Cleveland for another homecoming show (he grew up in Shaker Hts.- I had no idea).  This was a show that I actually paid full price!  For those that don't know, JD is, as Don Henley said "the unofficial member of the Eagles".  He has written numerous songs with the Eagles, (he is on the back cover of Desperado along with a young Jackson Browne), was the boyfriend of Linda Ronstadt and had a hit of his own "When you're only lonely".  He played a very laid back set which included a lot of solo songs but he did play New Kid in Town, Sad Cafe, and Heartache Tonight from the Eagles.  However, he did not play anything from his "super group" Souther, Hillman, Furay Band.   Which consisted

of Chris Hillman of the Byrds and Richie Furay from Buffalo Springfield and Poco.  Towards the end of the show, JD said that he would meet fans at his merchandise table, so we could "help him put his kid through dance school".  Umm, I don't think he has anything to worry about financially due to his percentage of the biggest selling record of all time "The Eagles Greatest Hits".  Anyway, I was glad I brought 3 albums with me just in case.  He was very nice, talked with the fans and signed everything that anyone had.

The final show of the week was Foreigner.  I have always been a fan of this band.  One of the first albums I remember getting as a kid was Double Vision.  I saw them in 2001 with Mick and Lou Gramm.  The music was great but Lou was not singing well.  I had no idea that he had a brain tumor.  I saw the band again a few years later with a new lead singer who did a good job.  Now, the band is touring again so I decided to go up after the show to get Mick Jones on my Double Vision and Foreigner lp's.  Another fan came over after the show and said that Mick did not play this show.  What?  How can they call this Foreigner when there isn't one original member?  This my friends is a very expensive cover band!  Even though they may be talented musicians, they are not Foreigner!  It's even a stretch to call them Foreigner with only 1 original member.  I decided to wait a little bit anyway because Jeff Pilson is playing bass and he is an original member of Dokken (one of my favorite hair metal bands!).  After an hour the band comes out and they were very nice.  I did get to meet Jeff and we talked about Dokken for a minute and he signed my album.  He is still in contact with George Lynch he said but hasn't spoken to Don in a few years.  I heard that Don was a diva.

Overall, I saw 3 good shows met 2 artists and added 3 different autographs to the collection.  The chase continues.  Until the next show!

Great, great stories, despite the strike-outs! Rundgren is, bar none, one of the nicest autograph signers in the business. I'll do a blog about him in a few months, since I have many stories to share on him.

Chrissy I met once. About 50 fans, she signed for all of us, as did the original Pretenders drummer. Yet next time she was in town, my friend said she dissed everyone and jumped right in the van.

JD Souther I saw once, but didn't bring an album...and sure enough, the dude came out and signed everything. And I own that Hillman Souther album, too!!!! (Chris Hillman is a San Diegan -- my hometown!)

Todd used to visit with a woman I used to know back in the late seventies in Willow Grove Pa. I met him twice but never got him to sign anything because it was a bit of a party scene. Nice guy and down to earth. He has a following of devoted fans esp in the Philly , upper Darby area. Keep collecting so we can read your stories! Thank you.

Thanks for your comments.  I'm glad someone is actually reading what I write.  No I have never hear of that band, sorry.  I'm sure Todd is great, he just skipped out this time.  I have 2 albums waiting for him the next time he comes to town.  The next person coming to town is Steve Hackett in 2 weeks.  If the weather isn't too bad, I may try for him as well.

nice todd! lou gramm is an awesome guy! I met him in person once!