A good week for adding to the collection 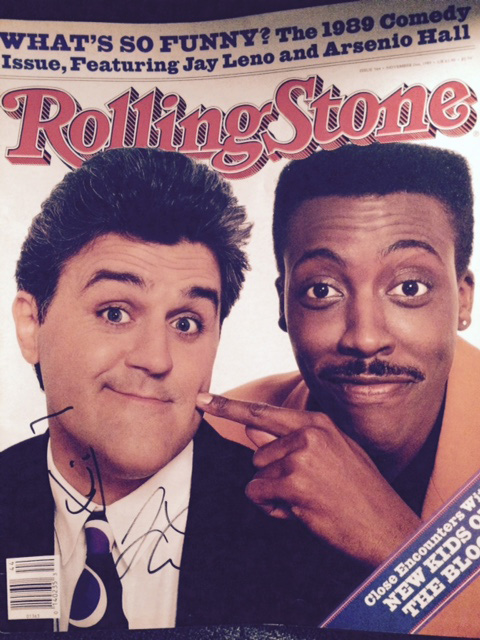 It was another good week for getting some autographs in Northern Ohio.  Last week, Jay Leno performed in Cleveland.  I used to get Rolling Stone magazine back in the day and I kept some of them from the late 80's and early 90's.  I happened to keep the one with Jay and Arsenio Hall on the cover, so why not try to met him? 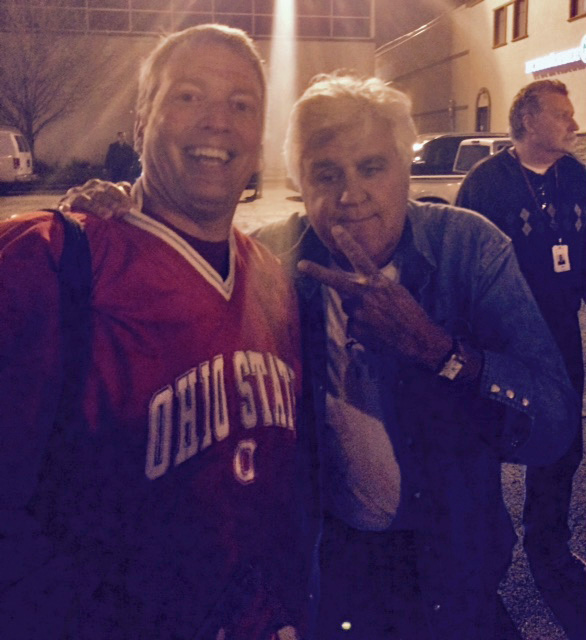 So I met my friend in Cleveland and after the show, Jay came out and readily signed and took pictures with all of the fans that were waiting for him.  Originally there were about a dozen people waiting, but once people realized who was signing, the crowd grew to over 25.  When he got to my magazine, he looked at it and said "man, this is 25 years old".  It turned out alright.

We had heard that Night Ranger was playing a private party at the House of Blues, so we decided to head there and check it out after Leno.  When we arrived the roadies were doing the load out and my friend said that the band probably left.  We waited a few minutes and started to walk towards the front of the venue.  I decided to turn around and noticed some people walking to a couple of vans.  I noticed the drummer, Kelly Keagy and called out to him.  He proceeded to get into the van, but my friend said hey, there's Jack.  Jack Blades stopped and waved to us, so we asked if he could sign a couple of things and he said sure.  I ended up getting my Dawn Patrol and Big Life lp's signed, which Brad Gillis previously signed after the show in January.  I wanted the setlist from that show signed too, but he said he had to go.  I was pretty pumped because I had never met him before.  He has always been the elusive one for me!

Later that week, Frankie Valli was playing in downtown Cleveland.  After the show, there were a lot more people waiting to meet Mr. Valli.  Most were ladies in their 60's that just wanted to see him.  These women hanging around his tour bus.  Security came out and asked them to get to the sidewalk where everyone else was standing.  After waiting 30 minutes or so, the air started to cool and the wine began to wear off, thankfully, most of them left.

Security came back out and said, Franki will come over to sign, just be in a single file line and don't be rude.  I can handle that.  I love it when the artists set rules.  If everyone is compliant, everyone is happy.  The artist gets their adulation and the fans get their brush with fame and hopefully an autograph.  He signed one item per person and also took a few pictures with fans.  I also happened to run into a person from this site there.  Nice to put a name with a face, Corey!  Thanks for getting my lp signed too. 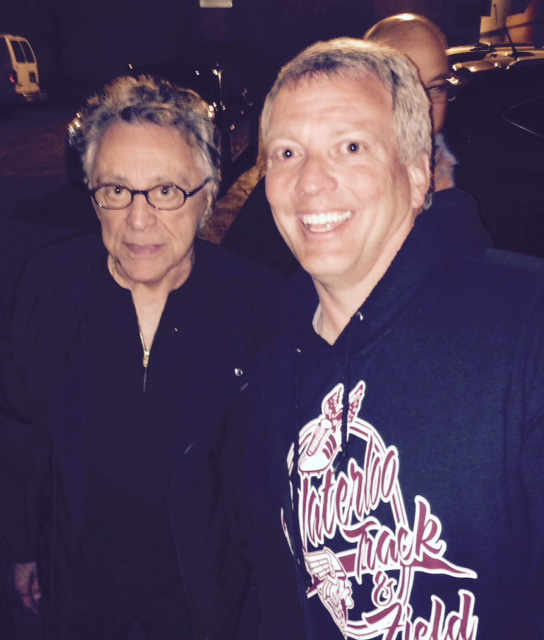 The next night, Arlo Guthrie was in Akron to play 2 shows that was going to be filmed for an upcoming special for the 50th Anniversary of Alice's Restaurant.   My friend won 2 tickets to the second show, but I decided to try to meet him after the first show.  There were 3 other fans waiting for him.  He comes out and was in a hurry but said- "I can only sign 1 per person, I gotta get on the road."  As he was signing, someone said Hey, aren't you playing here tomorrow?  Arlo looked up, and said yeah.  He signed the 4 albums and quickly walked to his bus.  I guess that is the standard response most artists give, even if it isn't true.  He didn't really have have any where to go, he just didn't want to be bothered.    I was happy to get my Alice's Restaurant album signed. As it turns out, the shows were not recorded because Arlo was a little sick and needed to rest his voice.  I guess they are going to do this at a later date.

Anyway, the show was very good.  His voice was a little raspy, but he still sounded good and told many stories, however he only ended up playing 14 songs.  Knowing that he headed right to the bus the night before, my friend and I left during the encore.

We each had one album, and a lady came up to us and said "He isn't going to sign or take pictures so you may as well leave.  He is very sick, you would have known that if you went to the show."  I pulled out my ticket and said that we did go to the show, we just left a little early.  She stormed off to the bus.  We waited a few minutes and she headed back into the venue.  A minute later, she and Arlo came walking out.  I said "Great show, thanks for referencing Kent State tonight", so he would know that I was inside.  I then asked if he would sign my ticket stub.  And he stopped, said "sorry I can't" and went to the bus.  I am glad I got him the day before.  But man, I hate when other people speak for the artists.  It is up to them if they want to sign or not.  I'm sure she told him that there are 2 guys looking for autographs- don't sign for them.  Whatever, lady.

I loved Jay's autobiography, "Leading with my Chin." Old book, but it's hilarious.

Jay was very accommodating to the fans here in Orlando too and would rank him high on the old magazine best signers list. I think he and Travolta are the nicest I have met and never say you want me to sign "EBAY Right" is that who I make it out to. Great Blog Coach!

Leno is super nice, but...when I asked him to help me get McCartney at a benefit in Beverly Hills we were both at, he said he couldn't do that. LAME! Especially since Leno ALWAYS got autographs after the show. Yes, his book was a great read.

Arlo used to be such a great signer, but yeah...when people that work for them inform them that "there are dealers out there" it makes things tough. That's why you played it BRILLIANTLY with the Kent State thing. Stuff like that works, as do ticket stubs. Always have that signed FIRST, even if they don't end up signing the priced LP, because it sets the tone. It lets them know you were at the show. Anyway, another great read. Thanks.