The Rock Hall Inductions were held in Cleveland last weekend.  Inductions are on a 3 city rotation- Cleveland, New York and LA.  This is the only Hall of Fame in the country where inductions are not held where the museum is located!  Why-- who know!!?  Could you imagine if the baseball hall of fame inductions were not in Cooperstown, or the football inductions not in Canton?  Cleveland put on a first class ceremony and it deserves to host this event every year.

My week actually started off the Saturday before by seeing former Righteous Brother Bill Medley.  It was an entertaining show.  Both he and his daughter said they would be signing items after the show at the merch table.  I believe I was the only one who brought my own materials (lp and HOF poster), others bought the cd's they were selling.  He was very friendly and happy to sign every item.

The next event was Green Day at the House of Blues.  The 1,100 seat venue sold out in a matter of minutes and I was lucky to get a ticket.  It was a great show and you can read my review at www.neomusicscene.com  Yes, I just started writing for this site!   Please check it out. 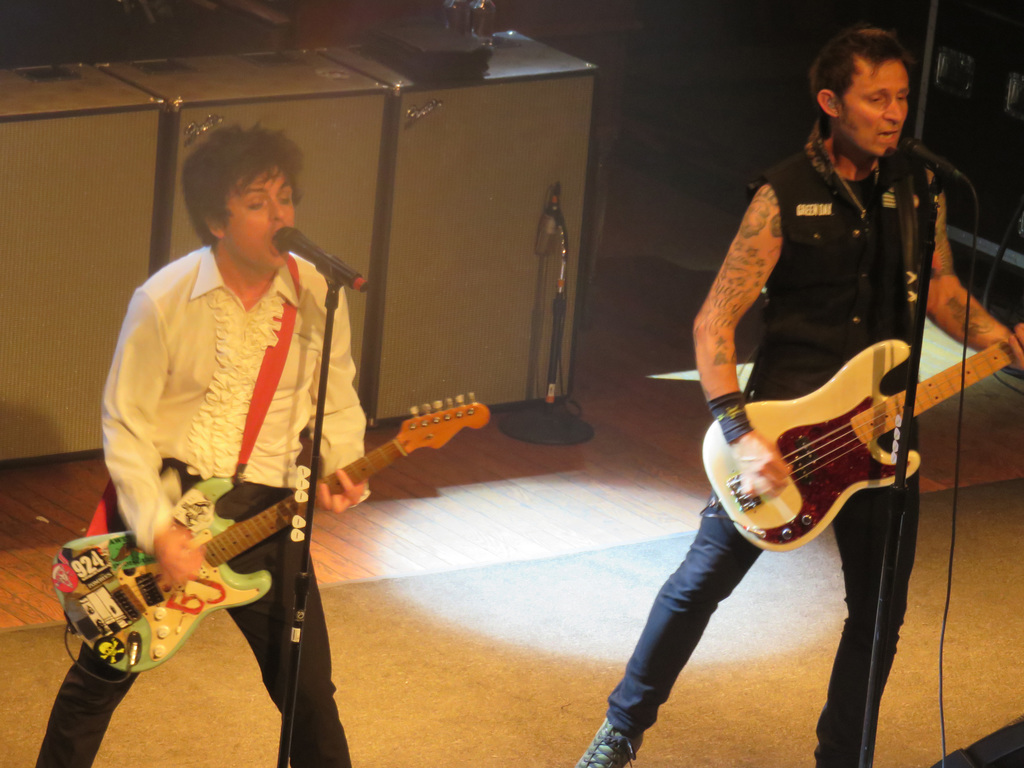 After the show, there were about 25 people hanging out, trying to meet the band.  Mike and Billy Jo got in a van and headed in the other direction.  My friend who shoots many shows there, knows one of the bouncers so we decided to talk to him for a bit.  As we were talking to him, Tre Cool walks out with some friends and heads to the van right next to us.  There were 3 fans and the bouncer and our one friend, who happens to be a good looking female, asked if Tre would sign- and he waves us over.  She had 3 items and he said "Which one do you want me to sign, I'm only signing one".  She went for the American Idiot vinyl and it turned out great.  My friend had a photo and I had a Rolling Stone magazine.  He looked at us and said "hey, I didn't say I would sign your sh**".  He then grabbed by buddies photo and puts a scribble on it.  Literally, it was a scribble, not one legible letter.  I hand him my magazine, he takes it, then says "sorry man, I'm not signing", and proceeds to give it back to me.  Tre is not so cool.  Whatever.

The next day, I got the day off and head to the Rock Hall.  They had a ribbon cutting ceremony for the new inductee exhibit.  I had no idea they were doing this, luckily I brought my stuff.  I was 2 feet from Tom Morello, but he was on a private tour so I didn't ask him to sign.  Although I should have!  Kicking myself for that one.  I think he would have done it.

At the ribbon cutting, 3 guys from Double Trouble, Bill Withers, Steve Van Zandt, Darlene Love and Mark Naftalin from the Paul Butterfield Blues Band were on hand.  After the ceremony, they whisked most of the guests out, but I did manage to get Bill Withers on my HOF poster.  First one of the day.

That evening there was a VIP event at the HOF were some inductees and other celebrities attended.  I had a Stevie Ray Vaughan and Double Trouble concert poster ready (I saw SRV and DT open up for Robert Plant back in '88).  After they walked the red carpet, both Tommy Shannon and Chris Slayton came over and signed it!  However, I did not see Reese Wayans.  I also ended up getting Darlene Love on the HOF poster.  Jimmy Vaughan left the event early and I went up to him and asked if he would sign a photo for me.  He just shook his head no and kept walking.  That was it for me that day.

Saturday I had a track meet so I did not get to Cleveland until 5:30 or so.  Induction doors opened at 6:30 and the show started at 7:30,  So I only had a little bit time to try to score some autographs.  As I was approaching Public Hall, 3 guys from the Foo Fighters were standing outside the hotel smoking.  I happened to bring my Sonic Session lp and ended up getting Pat Smear, Nate Mendel and Rami Jaffe the keyboard player.  They were very cool and I actually had a great conversation with Pat about Van Halen (my phone case is like Eddie's Frankenstrat).  I also got Mark Naftalin from Paul BBB on the HOF poster.  Dave Grohl signed a couple on the way to the venue but that was about it. I end up bringing my HOF poster in the venue but left my other lp's in my car.  The show itself was incredible!  Dave Grohl, Joan Jett, Tommy James and Miley Cyrus playing Crimson and Clover.  Paul and Ringo playing the same stage as they did in 1964.  Stevie Wonder and John Legend singing Lean on Me.  Green Day rocking 3 songs.  On and on... You MUST watch this show on HBO when it's on in May.

I leave the venue a little early and see Taylor Hawkins and Nate smoking in the hotel parking garage.  I wasn't sure what to do-- stop and get a photo, or run to my car to get the lp.  I end up getting to my car which was across the street, and of course by the time I got back, they were gone.

By this time, there is a huge crowd- people watching and some trying to get autographs.  Paul McCartney comes out and actually comes over to the fans and signs about 4 autographs.  But the crowd started pushing and shoving and a guy actually fell on top of Sir Paul.  That was it, Paul headed into the hotel and was done signing for the weekend. Nobody was signing after the show.  We heard that Joan Jett was having a private party at the HOB so we decided to head over there.  Our cute friend was already there when we arrived and she said that Joan and Alice Cooper had just left.  A few minutes later up rolls 2 SUV's and Sir Paul and Steven Van Zant get out.  Paul said not to bother, because he wasn't signing.  Man, that was twice I was within 10 feet of a Beatle!  Dave Grohl came out of the venue and a few others but no one signed.  A little later, Gary Ryan- the original Blackheart bass player came out and signed for everyone.

At that point in the night, around 3:15 am, I was pretty worn out.  I wanted my buddy to take me to my car so I could head home.  He said wait 10 more minutes- he always says to wait 10 more minutes!  This time it worked out as Beck meandered out by himself.  He was awesome.  I asked him to sign a photo and he did and he also took a picture with me and one with Robyn too. 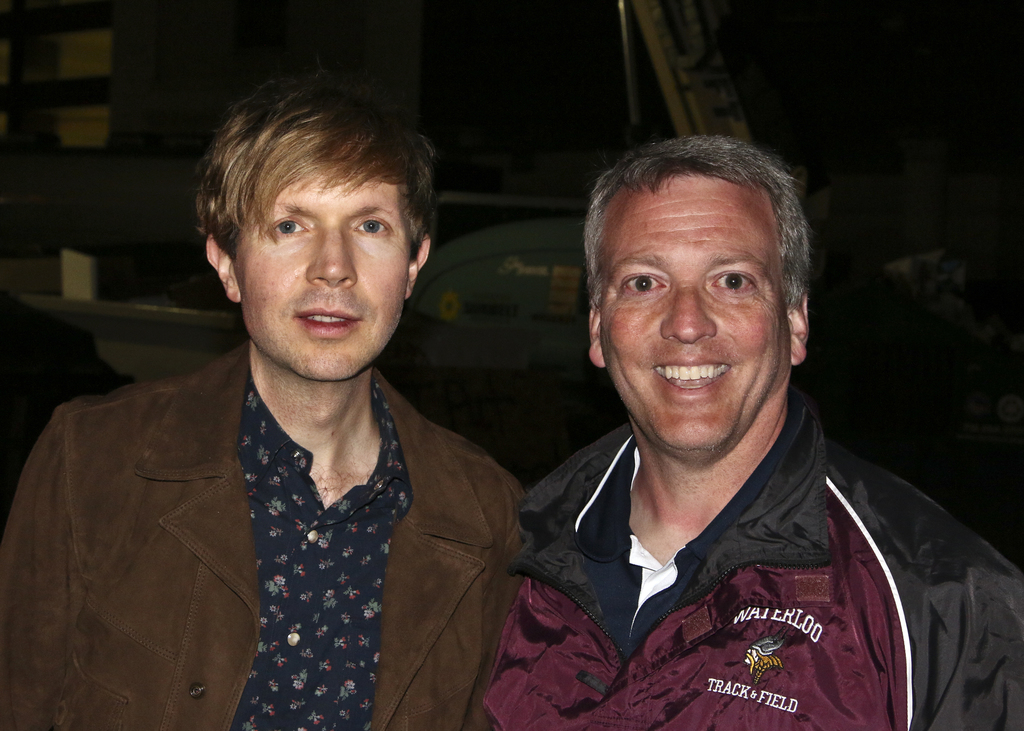 All in all it was a great musical weekend.  I was just too tired to head back to the hotel or airport on Sunday.  I do have a real job and needed to rest up.  That ended up being somewhat of a mistake as I later found out  Green Day signed everything as did Fall Out Boy, Steve Cropper, Bill Withers, and the biggest one:  Stevie Wonder!  I guess he took pictures with everyone and signed for everyone too.

Oh well, if I went, I would not have been able to function.  Sometimes your health is worth more than the autograph.... sometimes!

Great report, Greg! And congrats on your new gig.

Comment by Paul on April 23, 2015 at 9:15pm
Pat looks like he would be a hoot to get along with. You've outdone yourself. Work gets in the way of everything.

Great job, Bill Withers is a good one. Your gonna run into more jacka$$es like tre but good story to expose him.

Wow, your life is seriously fantastic. I stood about 10 feet from Paul once too, but he didn't stop to sign either. Congrats on such a great couple of evenings.

Thanks guys.  Paul- Pat was awesome to talk to, we are both huge Van Halen fans and he said how bad a** David Lee Roth was for finishing the Jimmy Kimmel show after almost cutting his nose off.

Some guys are just jerks, and I certainly will expose them on this site.

Adam- I am having fun!

Also, I got a different perspective on the "professional" autograph guys.  Some are really nice, but others are very shady.  It's all about them, and screw everyone else.  I heard that when Bill Withers arrived in Cleveland, he went into a private area at the airport, so he could sign for all of the collectors that were there.  However, he stopped after the 10th person because the dealers had 8-10 items each.  I guess he figured he signed 100 items and was done even though there were several people still waiting.  Why not get your 2-3 items signed then move to the back of the line so others can have a chance?  It is too bad people have to act that way.

Comment by 24rubikscube on April 25, 2015 at 1:05pm
I really wish they had the show there every year. Invest in the museum, and more people would go. That's an excellent show. To see Paul in person would be like seeing the president.

It's cool that Beck was a great guy. Not surprised at all. Unfortunately not surprised about Green Day either.

That's why I gave up doing what your doing now. I soured on the chasing because of the so called "pros" and crap they used to pull (standing with a kid holding a guitar so Tim Schmidt would sign it, then Tim looked at us older fans and collectors like we were the sellers and ignored us while the real weasel got the guitar signed to sell) lots of stuff like that. Just got Simon Kirk the drummer from Bad company at Chiller Theater for 20 a sig , he said he only personalizes even though I paid him because he thinks everybody is out to resell.

Comment by 24rubikscube on April 25, 2015 at 7:24pm
I won't buy autographs. I won't reward the practice of it. Unfortunately buyers aren't educated on it. If I have an extra of somebody, I'll give at as a gift. Its a hobby, not a job.

I don't like people assuming though. I'm not a seller, and I wouldn't appreciate being accused as one. I understand it, but I don't like it.

Unless you run into people and get them on scraps of paper, your paying one way or another. I did draw the line at paying Mike Nesmith 80 bucks for a signature and it really annoys me at the people that charge to take a picture with them. The two Z nation actors would take a "free" pic with you if you bought 2 25 buck autographs. I didn't bother with them either.