Moondog, Manilow and even Jesus! 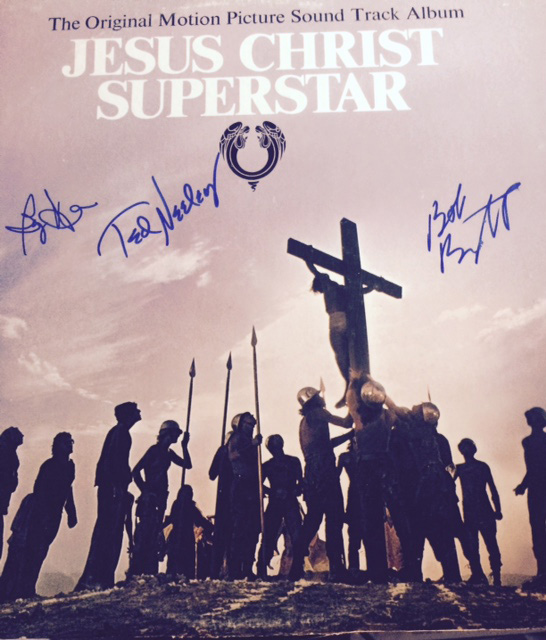 Last week, 2 events happened on the same evening.  A screening of Jesus Christ Superstar, featuring a Q&A before the film with 3 of the main cast members- Ted Neeley, Barry Dennen and Bob Bingham, and an autograph signing afterwards.  Barry Manilow- the guy who writes the songs, was also playing in Cleveland.  My wife is a big Barry fan and she actually went to the show.   My buddy and I decided to try and get Barry before the show.  However, he was already in the venue by the time we got there.  So we decided to go over to the screening and hopefully get the 3 guys before the Q&A.

We got there early, but apparently the guests went in the side door.  We had both seen the musical before and decided to wait after the screening to meet the actors.

While waiting in the parking lot, we had heard from another friend that Barry signed at the airport on his way to the show.  I am not a real fan of Barry’s but I figured a signed album would be a nice anniversary present for my wife.  So my buddy and I head for the airport and meet up with another friend.

We were only there about 10 minutes when a police escort and a black SUV rolls up.  The manager in the passenger seat looks to the back, looks at us, looks back again at Barry and rolls down his window.  He said, OK he will sign 1 item per person.  Give me your items and a Sharpie.   The one guy hands him a silver pen.  Not sure why he didn't give him a black Sharpie, and besides, silver always has the chance to explode!  We got our items back, and everything turned out great.  Except one thing…. Barry had my album upside down!  Didn’t he notice this?  Oh well, at least we got him and I think my wife will be pretty happy! My friend and I go back to the theater.  There was still a long line for the Superstar cast.  Luckily we had friend who decided to stay behind and took our albums to get signed.  When we returned, he was at the front of the line and was waiting for Jesus- I mean Ted Neeley.  They let me go to the front so I could take a picture of my friend.   I also go my picture with Ted.  Three autographs from the original cast on the soundtrack album is a pretty nice piece.  So we were 4 for 4 that night. 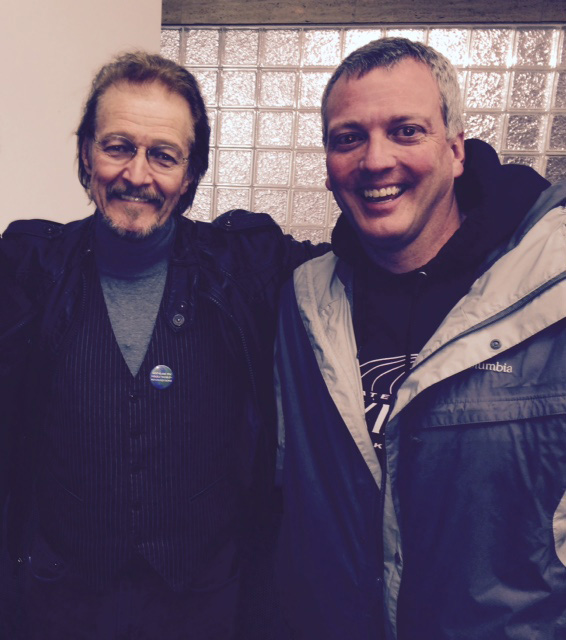 The Moondog Coronation Ball was held on April 4th.  Some of you might be thinking “What the heck is that?”  Well, it was the name of the 1st Rock N Roll concert held in 1952 that was hosted by Alan Freed, the man who coined the term “Rock N Roll” in Cleveland.   Cleveland has been hosting the  Moondog Coronation Ball every year since 1992.  This year’s lineup consisted of BJ Thomas, Mark Lindsay of Paul Revere and the Raiders, Randy Bachman of BTO and the Guess Who- which by the way should be in the Hall of Fame, and Smokey Robinson.  I could not pass up an opportunity to see this lineup for 23 bucks! My friend and I arrive at the hotel early but we just missed Smokey by a minute as he was headed to the Q.  My friend and I decided to grab a bite to eat on E. 4th St, which is the new hot spot in Cleveland.  After dinner he stayed behind as he was also looking to get a couple of comedians who were in town and decided to meet up at the hotel after the show.

Smokey was first on stage, and I must say he sounded great.  He still has that smooth voice and can still hit the high notes!  I texted my buddy and let him know when Smokey was done.  About 20 minutes later, he texted back that Smokey blew off the 3 people that were waiting for him at the hotel. 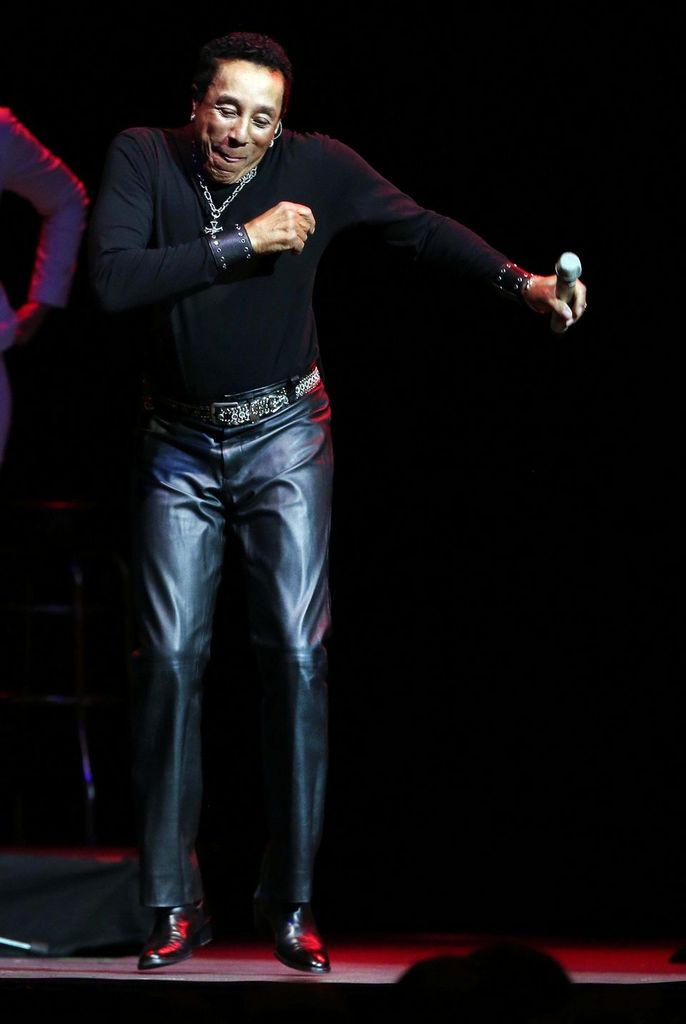 Next was BJ Thomas.  He also sounded great, but didn’t have the charm that Smokey had.  Still, hearing songs performed live that were a part of my childhood was great.  Another somebody done somebody wrong song, Hooked on a Feeling and of course Raindrops Keep Falling on my Head were awesome.

I decided after his set to leave the show and head to the hotel.  Since Smokey got there so quick, I didn’t want to miss BJ since I had an album for him to sign.  Besides, I really am not a fan of Paul Revere and the Raiders and although I did want to see Randy Bachman- I had seen him before back when BTO opened up for Van Halen.  I figured I got my money’s worth with Smokey and BJ.

I make my way to the hotel and meet up with my friend.  After about  90 minutes, Mark Lindsey and his band arrive at the hotel.  He was very nice, but I didn’t have anything for him to sign.  Well I did, but I forgot that I had my ticket in my pocket- I almost always forget about that- duh!!  I thought it was strange the Mark made it back before BJ even though he went on after BJ.  Who knows what these guys do.

About 20 minutes after that BJ and his manager arrive.  There are only 2 of us there and we ask if he would sign.  He said sure, come on in the hotel and I’ll sign whatever you have.  I thought that was pretty nice of him.  He was very cordial and signed my two albums- my friend had left to go get Carlos Mencia, so I got his album signed too.  We waited another 30 minutes for Randy Bachman but I decided to call it a night since Easter was the next day. Jesus, Barry and BJ, I would say that was a good Easter week.

Great story. And it's good you didn't wait for Bachman, he usually doesn't sign.

And how can you not be a fan of Paul Revere?!! Love those songs. Kicks just keep getting harder to find....

Thanks!  I think you and I mostly have the same taste in music.  However, I thought the same thing when you said you only like 2 REM songs.  I love Everybody Hurts.... sometimes!

Thanks for the report coach! Chiller theater my next stop, of course Im gonna have to pay through the nose. Debating on Mike Nesmith , he might be 80 bucks!

Have fun at Chiller!  I see the cast of Jesus Christ Superstar is going to be there.  Let me know how much they are charging.  I would like to get the other 4 cast members.

My next concerts are Bill Medley on Sat (you can't beat free tickets).  I got lucky and scored Green Day tickets next Thu. at the House of Blues, then next Sat. the Hall of Fame Induction Ceremony.  I am hoping to get some good music autographs next week!

Medley  can be had, he seemed to be a nice guy the one time I met him. Will post my J.C. poster later when I get time, four of them were at chiller last year.  Ive always had a bit of a crush on Yvonne Elliman.

Aww man you got Induction tickets! I'm sooo jealous! Have fun with that!

Ian- I got Bill after the show.  He and his daughter were signing at the merch table.  He was very friendly and signed what ever you had.  Of course they both were hawking their cd's.  I got my HOF poster signed, and a Dirty Dancing lp for my friend.  I think I was the only one in line that brought my own stuff.  Now I'm getting ready for Green Day and the Induction concert!  Gonna be a busy weekend.