Adding Some Music and Football to the Collection

I've been shooting and reviewing concerts for 2 years and it's been great.  Getting to be that close to the stage, even for only 3 songs, is an awesome experience.  Hanging out after the show to try and catch the artists for an autograph is fun and talking with other collectors and hearing great stories makes it worth while, even if you don't always get the autograph.

This summer has been pretty good as far as adding to my collection.  Here's what I did over summer vacation.

My daughter like alternative music.  Last year the AP Music Awards were held in Cleveland, but since the RNC decided to take over the city, they decided to move the show to Columbus.  So my daughter and her friend headed south to C-Bus to watch the freaks, er artists, walk the red carpet.  They tried to get selfies with some of the bands (they got a couple)  I tried to get an autograph from Rob Halford or Marilyn Manson (unsuccessful).  I did however get to meet Jacoby from Papa Roach and had him sign a drum head. Then Machine Gun Kelly walked over to talk with someone he knew and signed the same drum head. Turns out MGK sang a couple of songs with Papa Roach later that evening, including "Last Resort" so having both of those guys on the same drum head kinda makes sense. 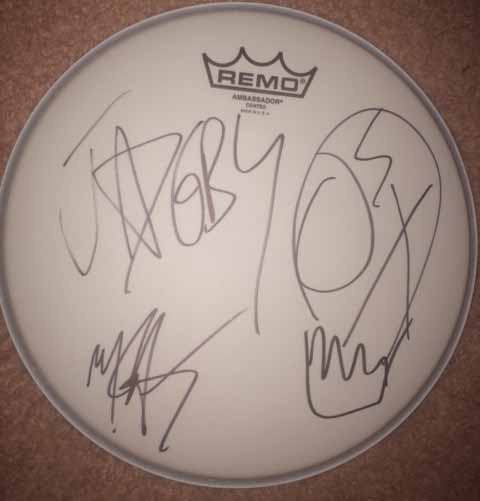 Speaking of the RNC, Prophets of Rage featuring 3 guys from Rage against the Machine, Chuck D and B Real played 2 pop up concerts in Cleveland and then put on a full show that Tuesday night in a small club.  I was lucky and got 2 tickets when they went on sale before they sold out.  It was one of the best concerts of the year as my friend and I were in the pit, directly in front of Tom Morello!  We were hanging around afterwards of course, and we see 3 guys from Rage in a van leave the venue.  There were like 5 of us just talking, when a car that was leaving the lot just stops.  Out walks Chuck D, who was driving by the way, and says "How did you guys like the show?  What do you have for me to sign?"  Unbelievable!  Super cool guy, signed anything that you had.  I kick myself for not picking up a PE album.  I did have a drum head at least. I finally got to shoot Yes.  Even though there isn't one original member- Steve Howe played on the 2nd album, they are great musicians!  Everyone of the band members came out after the show and signed for the fans.  My friends and I say that the British artists are way more fan friendly compared to their American counterparts.  One thing I found out is that Steve Howe will not sign instruments, and he will not take a photo either. He signed an Asia lp and 45 sleeve, and I got Geoff Downes to sign a "Video Killed the Radio Star" 45 to which he said "Where'd you get that?"  I'm going to try to get Anderson, Wakeman and Rabin to sign the drum head this October. 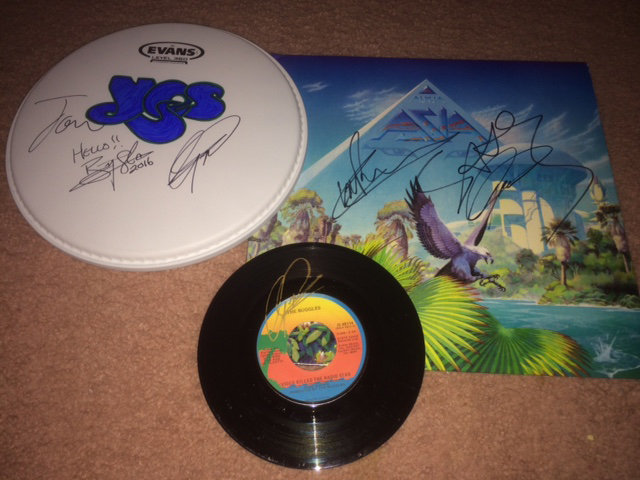 Triumph's Rik Emmett played an acoustic show.  I did a phone interview with him to help preview the show; what a great, down to earth guy.  Anyway, as my brother and I were enjoying the show (after I shot it)  a guy handed me an envelope from the publicist with 2 free meet and greet passes!  I brought 2 Triumph albums and a guitar to try after the show; now it was a guarantee.  He was awesome and he's a great guitarist!

The Football HOF is only 45 minutes away and I've been going to the induction since 1999.  There are only a few guys I need for projects that I have so I only went a couple of days.  At the airport I got James Lofton, Jan Stenerud, Willie Roaf, Ron Wolf and Willie Davis.  I even got Lee Greenwood who was coming in to sing the National Anthem for the game (that was never played).  I did bite the bullet and pay for the induction class which was $425.  I rationalized this in my head because Brett Favre charges $400 just for one autograph on a premium.  So I thought: buy 1 Favre, get 5 other guys free.  At the session, everyone was great except Marvin Harrison.  He did not want to be there.  All the other guys happily added HOF 16 to their name (Favre usually charges another $150 for this) except Harrison.  I asked if he could HOF it, he looked up and said sternly "No."  Allllrighty then, so I moved along. My friend is a concert fanatic.  Sure, I go to a bunch of shows- 41 so far this year, but I am "working" at most of them.  I think I've paid for 9 shows out of the ones that I've seen.  He pays for all of them (if I don't get a +1), and if there is a meet and greet, he buys that too.  Well, he decides to get the premium package for the Goo Goo Dolls and asks if I would like to go, he had an extra ticket and wasn't going to charge me.  Little did I know we got the meet and greet, and our seats were on the side of the stage!  Literally on the stage!  Then we also got to hang out with the band after the show where they signed anything we had.  I'm sure the dinner and beer I bought him didn't come close for what he paid for those seats.  It's nice to have generous friends! 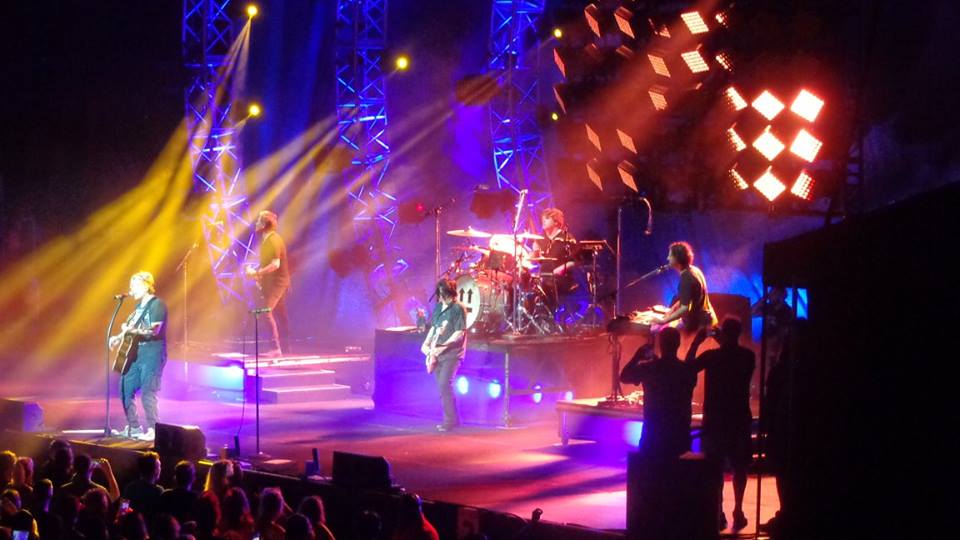 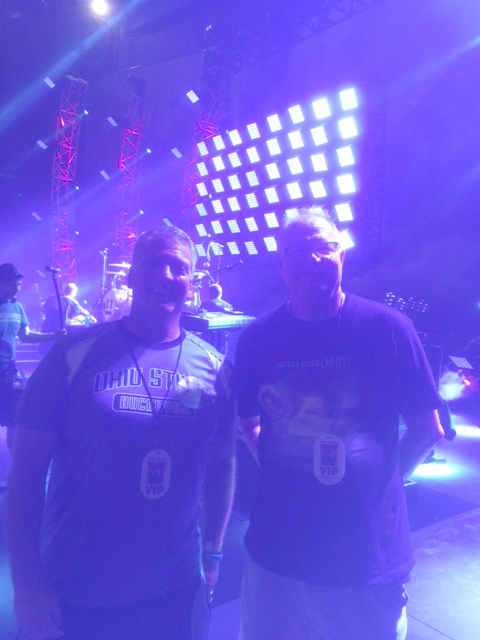 Finally, I got to see surf guitar legend Dick Dale.  Why the man isn't in the Hall of Fame is beyond me.  About an hour after the show, they walked him out front to his car.  We asked he he would sign and he said no.  A guy with over 1,000 autographs in his Rock n Roll book asked his wife if he could sign for him.  She said "Dickie, can you sign one autograph?"  He said "They won't let me."  She is his manager so she said "who's they?"  Another stage manager said "Is your hand broken?"  I've never seen an artists own people break down the artist- it was great!  So he said "Ok, one each, line em up!"  There were 5 of us, and I was happy to get the legend on my guitar!

I have a few more shows coming up: Lou Gramm, Toto, Sia, Loverboy, Anderson, Rabin, Wakeman, and Steve Vai- that takes me through October.  I have to slow down a bit now that school is starting soon.

Until next time, keep rockin'!

I interviewed Dick Dale once. We talked for over an hour. Great cat. He did yell at me for asking him to sign an album which was a "bootleg." I said, "It can't be. I bought it at the store." He went into this big long explanation of how record companies can bootleg, too. He reluctantly ended up signing it, though.

I got Steve Howe on a solo album, which was cool. But...I had meet-and-greet for a YES concert (press pass, really)...and one of the main guys didn't want to come out and do it. We were all so pissed.

Tom Morello is ALWAYS a great signer, but man...DO NOT get into a conversation about politics with him. Trust me on this, folks.

Chuck D -- met him at a record store. He went nuts about how much he loved my "JBS" shirt (James Brown band). Super cool cat, although...I'm not much of a rap fan.

Great blog Coach love to hear about your latest adventures in the hobby!

Josh- Was one of the Yes guys Alan White?  Last year he was the only member of the band who wouldn't sign.  He just sat in the van until everyone was done signing and taking pictures.  One fan approached him, and he just waved him off.

Tom didn't sign anything in Cleveland!  A guy I know was one on one with him at one of the pop up concerts/march and he told him no.  I thought for sure he would have signed after the show from what I've heard about him.  Wasn't happening!