Meeting Angus and other Autograph Exploits

Just before school started, a few big names came to town so I figured I would try to meet them.

First Kevin Bacon came back to Kent with his brother and their band.  I didn't go to the show but I figured I might try to get Kevin on the Footloose soundtrack.  The fans were waiting by the side door by the bus and he actually came out the front door.  He did sign a few on the way to the bus and took some pictures with the primarily female crowd.  I did get his scribble on the album before he got on the bus.

Next, I won tickets to see Seal so why not go and try for an autograph after.  His show was very good and he has a great voice.  He did a couple of cover songs but not one of his biggest hits "Fly Like an Eagle."  Afterwards, there were about 15 fans waiting for him.  He came out and waved and headed for the bus.  We called him over and he happily obliged.  He was super nice signing everything and taking pictures.  I got a cd and my ticket signed. 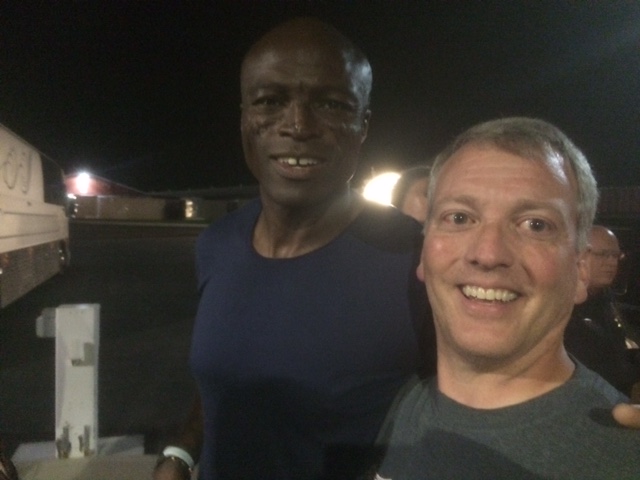 Next up was Lou Gramm- the voice of Foreigner.  I actually got to interview Lou a few weeks before the show and he is a very nice guy.  He actually sounded better than I expected and I hope he and Mick can do something for their 40 anniversary.  After the show, he stopped by the merch table where if you bought something, he would sign other items.  There was a sign stating that he would only sign books, cds and t-shirts.  I bought a book and I also put down three albums and he signed them with no problem.  I had 2 more items but I didn't want to push it.  He didn't allow pictures because he said he was all sweaty. The next band I got to shoot was Toto.  I had never seen them before, and man are they great!  Superior musicians, especially since they added the legend Leland Sklar on bass for this tour!  Do yourself a favor and check them out if you haven't, or see them again if you have.  They are by far the nicest band I have ever met!  Every member came out and signed and chatted with fans.  They signed whatever you had and were happy to do it.  I brought my guitar for Steve Lukather to sign and he asked "Who's on this?"  I said "some of my favorite guitarists: Slash, Zakk Wylde, Rik Emmett, Brad Whitford, Dick Dale and hopefully you!"  He said "Man, I'm honored to sign this. thank you."  So Cool!  I ended up with 3 albums, a program and a drum head signed by the band, along with the guitar signed by Luke. 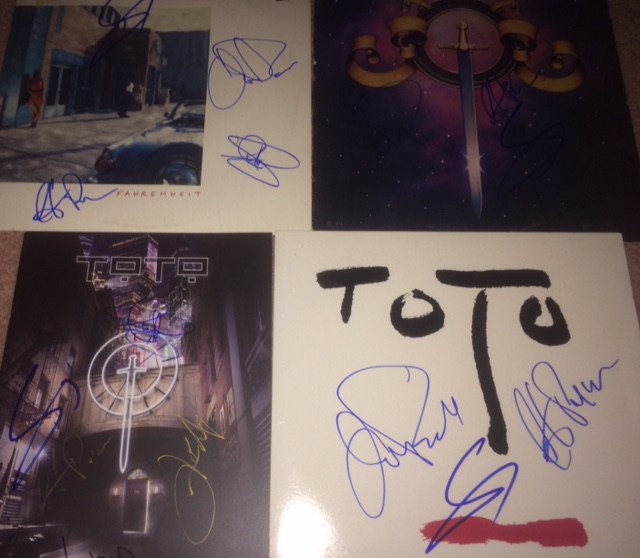 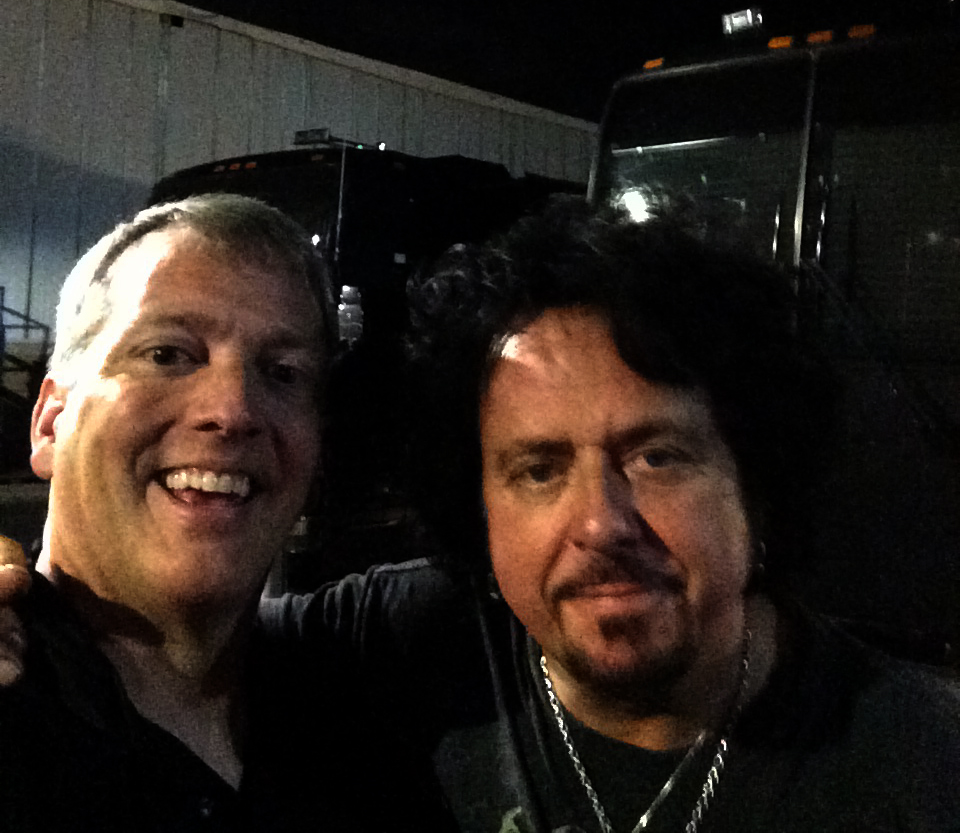 AC/DC came to town with Axl Rose to make up the show that was postponed in March due to Brian Johnson's hearing problem.  I was unsure how this would go down and since my friend won tickets- it wasn't going to cost me anything to find out.  I have to say- Axl did a great job!  Especially on the Bon Scott stuff, and they broke out songs they haven't played in years like "If you want Blood" "Live Wire," and "Riff Raff."  It was a great show overall.

Word on the street was that Angus was signing at the hotel after the show.  So my friend and I decided to check it out.  Now, it was a school night, and I knew it would probably be late.  But hey, when do you have an opportunity to meet a legend?  Suck it up and see what happens.  So we did, along with about 50 other fans.  About 1:15 a guys comes and tells us to be in a single file line, 1 item per person and don't even bother to try 2 items or he's shutting it down.  He said Angus was feeling a little sick so he may not even do it.  Well, about 20 minutes later up pulls a black SUV and Angus gets out and has people come to him, instead of him working the line.  I couldn't believe it!  While Angus was signing, Stevie Young was working the line signing anything you had.  Too bad Cliff and Chris Slade went right into the hotel.  Axl was no where to be seen.  Question was, what do I put him on?  My guitar with the other legends or single him out on something.  I bought a re-issue Back in Black album and decided on that.  It turned out great in silver paint pen.  (trust me, I was nervous about that too!)  I get home at 2:30 and get up and teach the youth of America at 6.  Yes, I took a long nap when I got home!  So worth it. 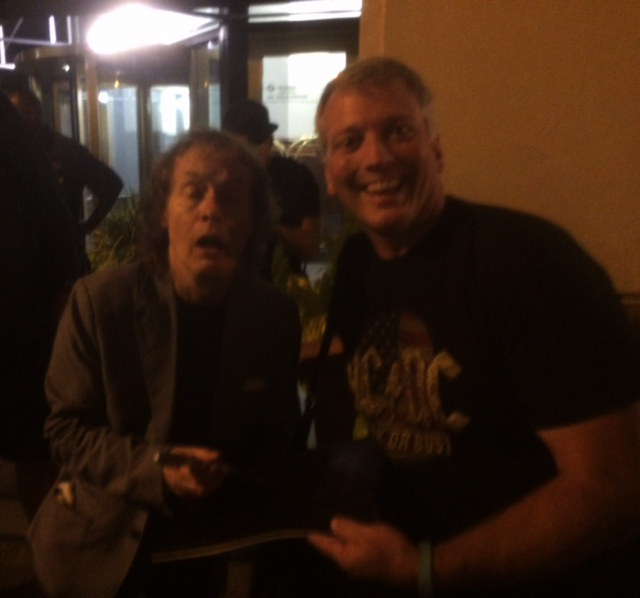 I got to cover Loverboy last weekend.  Thank god it was on a Friday!  They sounded exactly as they did in 1986 which was the last time I saw them.  Mike Reno is a little bigger today but his voice is still on point.  After the show the keyboardist and drummer went right to a waiting van, however Paul Dean the guitarist came out with his own sharpie.  I was the only one with vinyl, actually I was the only one with anything to get signed at all besides tickets.  Mike Reno came out and was very cordial with fans signing and taking pictures.  I got the both of them on the first two Loverboy albums.  I also brought my Footloose album.  He said, "Who do you have on here?"  I said "Kevin Bacon."  He said "Wow, really?" and signed the lp. Congrats Coach! Jealous you got Seal!

Great blog Coach! Nice that you met Angus and wished you'd met Cliff since it's up in the air about continuing after the current tour.