A Very Good Fall So Far 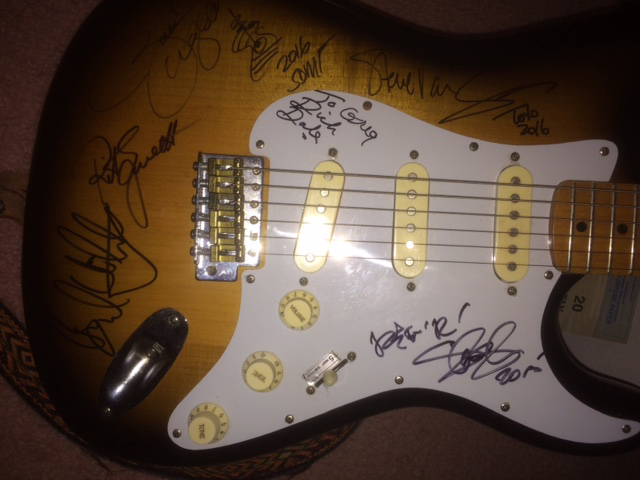 It’s been a pretty productive fall for adding to my music collection.

The middle of September, George Thorogood came to town.  He did his usual wave to the crowd and went right to the bus.  But his manager came over to the 8 or so fans that were there waiting and said he would get everything done.  He was very cool and we were joking with him about him being a Golden State fan.  He did admit that LeBron is the most complete player he has ever seen.  I ended up with 2 albums signed.  Everyone should be like this guy, if the artist doesn’t want to come over.

Mike Love and the Beach Boys played a free 8 song set at the Rock and Roll Hall of Fame.  The Hall does have some nice events a couple of times a year.  After the show, Mike was doing a book signing.  I hung around and got the setlist and saw Bruce Johnston at the side of the stage.  I asked if he could sign the setlist and a 45 that I brought.  He quickly did and then walked away.  My friend and I were one of the last ones in line to get Mike’s book signed.  You were only permitted 1 book per person.  Wasn’t he there to sell books?  You would think there would have been a limit of 3 or 4, but the Hall isn’t very smart when it comes to that.  They were also saying that he was only going to sign his book, telling people to put their albums away, even though he had a table full of different colored Sharpies.  They did the same thing for Graham Nash, but he was happy to sign anything.  Anyway, my friend also grabbed a setlist and asked if he would sign it, and Mike did.  I was right behind him, got my book signed and asked if he could sign my HOF poster, he said yeah and did it.  After he signed it, someone from the Hall said “He’s only signing his book.”  I said, well he just signed my poster too, and I scurried off.  I can see if the artist doesn’t want to sign other items, but leave it up to them, not the management. 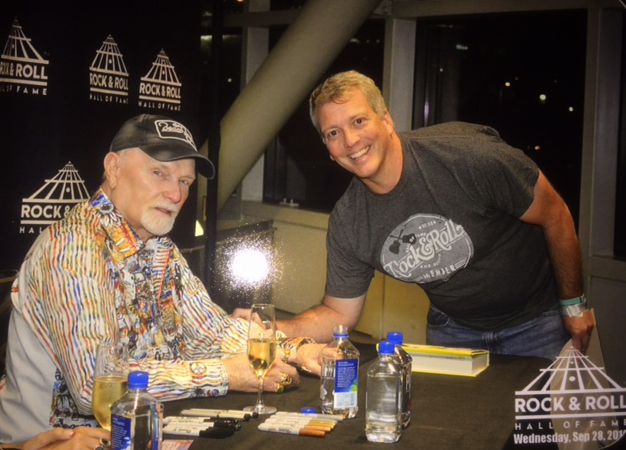 Next, the legend John Mayall played at a small club.  I was surprised he was sitting at the merch table before the show- selling his CDs.  I asked if he would sign a guitar, he said “If you want, but hurry up, I’m going on stage in a few minutes.”  So I ran to my car and grabbed my guitar and he signed no problem.  He and his band was also at the table after the show.

Alice Cooper played in Akron and I got the opportunity to shoot this show.  It was actually the first time I had ever seen Alice, I always seemed to miss him when he came to town.  He was selling signed and unsigned “Alice for President” posters at the table.  I decided to buy a unsigned one and try my luck after the show.  I knew his band was going to be at a local bar after the show so I decided to go see what they were up to.  Everyone was there except Nita Strauss.  Two guys were playing DJ and the other guys were just hanging out with the fans.  I head back to my car, thinking that I missed Alice.  But I see about 3 fans waiting by the buses and said he should be coming out any minute.  I grab my stuff and Alice comes walking out.  As he approaches, I hold up the poster and say “I would vote for you!”  Alice said, as he grabs the Sharpie, “No matter what you do, NEVER vote for me!”  He signed 2 each for everyone there- I ended up with the poster and a drum head.  I had one of my students draw his eyes on it, I think it turned out great. 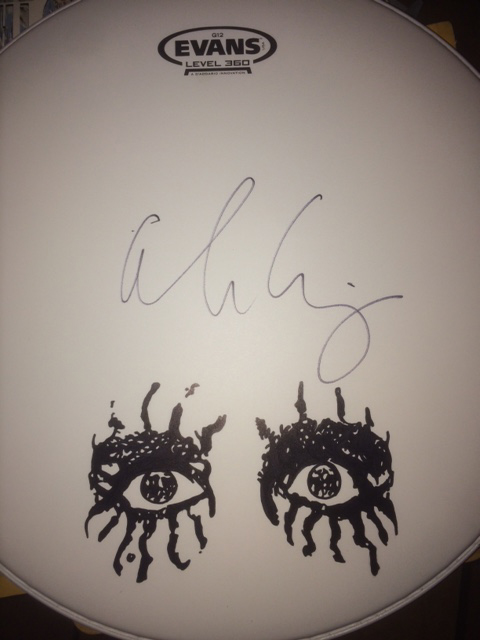 Eric Johnson played a solo acoustic set in Cleveland.  A few fans waited after the show and his manager said, “Eric will sign for you, but I don’t want him standing out in the cold.  We will bring you in one at a time inside the door.”  Very cool.  I had him sign the same guitar as John Mayall and a poster from the venue. My daughter and I got to see the Olympic gymnasts on tour.  To see Simone Biles, Gabby Douglas, Shawn Johnson and others, including the men’s team was awesome.  The strength, flexibility and athleticism in these athletes is incredible.  Afterwards, we decided to walk down the street to see if we could meet Joan Baez who was also in town.  After about 20 minutes, Joan came out and we asked if she could take a picture.  Her manager waved us over and the 6 of us all got pictures with this legend.  She was headed for the bus and I said, “Joan, could you sign this Woodstock poster?” and she got on the bus.  Her manager said give it here and took it on the bus.  Maybe 2 minutes passed and the door opened, Joan came out and said “There you go, dear.” and handed it to me.  Awesome. The incredible Steve Vai brought his 25th anniversary of Passion and Warfare to Cleveland.  After waiting about 2 hours Steve came out and was headed to the bus.  I said “Hey Steve, great show.”  He said “Thanks, Oh man I’m sorry to keep you waiting.  I didn’t know anyone was here or I would have come out earlier.”  He proceed to sign everything for everyone and also took pictures.  He is a very gracious man.  I got a custom mini guitar, his new CD and my multi-signed guitar. 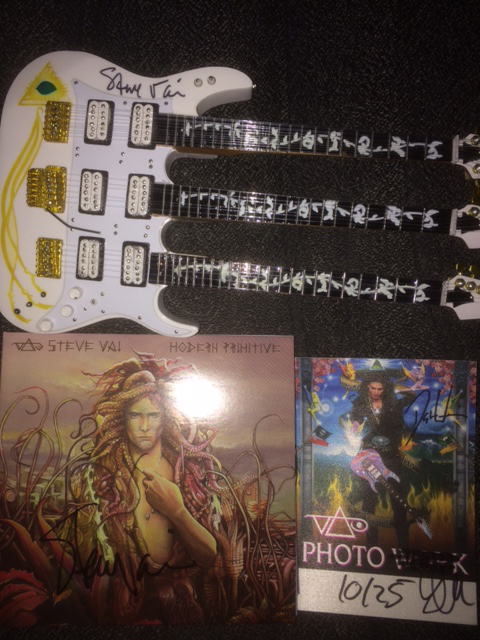 Elvis Costello played Akron on Friday.  Another artist that I have never seen to cross off my list.  Very good show.  I went out as soon as the show was over and his bus was already gone!  It wasn’t too long before original Attractions-Pete Thomas and Steve Naive.  They both signed and album and my new Rock Hall poster.

Finally, Anderson, Rabin and Wakeman known as ARW are touring and hit Akron.  Wakeman was the first to arrive to the venue and signed a few each for the 5 or so who were waiting.  We ended up going to the hotel and Trevor Rabin came out and signed everything for the four of us.  As he was signing, Jon Anderson came out and went to the van.  My one friend got him on four things, but as Rabin was signing, I didn’t want to be rude and bolt.  I made it to the van and said Jon could you please sign this drum head.he said ok, but the door closed.  He then opened it and took it then took the Sharpie and the driver closed the door and took off!  About 25 feet later he stops and opens the door and Jon said “just kidding!”  He then signed it. The show itself was incredible!  Go see them if you are a Yes fan!!  So good.  Afterwards there were a bunch of people waiting and Jon actually comes out and walks over and thanks the crowd.  I thought he was going to sign, but he got in the car.  We bust it over to the hotel and there are my friend and I, two on one and we asked if he could sign a couple and he said “no thank you, I’m tired.”  Understood.  However, I should have asked to take a picture with him because he stood waiting for someone to open the door.  Rabin was great again and signed, then Wakeman came in the front and signed for a bunch of fans in the lobby.  He was great!

I was very happy to get these three legends who should already be in the Rock Hall.  I told Rick that and he said “I don’t care either way.”  I said that I had heard that he may be washing his hair the day of induction if they do get in.  He said “If they can’t put us in while Chris Squire was alive, then I want nothing to do with them.  I WON”T be attending!”  I see his point, and agree!  He did did sign my HOF poster though, as did Rabin.  It’s a pretty good start for the new poster.  2 Attractions, 2 Yes guys and Lee from Chicago.

I also got Don Dokken and Mick Brown from Dokken, The Babys, Jim Messina and Carl Palmer over the last two months.

Keep rockin’ until next time!

You are kicking butt. I always like hearing your adventures.