It was kind of a June swoon when talking about in-person autographs for me.  I had some success but it did not start out well.

The month began with my friend calling me at the last minute saying another photographer friend had an extra ticket to Peter Wolf’s show.  So I jumped in my car and headed to Cleveland to see Mr. Woofa Goofa put on an amazing show.  He actually signed a copy of “Lights Out” for a fan from the stage.  After the show, about 10 people were hanging out trying to see if Peter would come over.  Well, his manager took him out the back entrance and walked him along the side parking lot.  I decided to go up to his bus, and he was there talking with 3 fans for a minute.  I waited until they were done and I approached and asked if he would sign my Love Stinks album.  I was 3 feet away and he said “Hey, I signed from the stage” and proceeded to get on the bus.  Really?  I did buy his latest pre-signed vinyl album from the merch table for 20 bucks.

The Monkees came to town, well at least two of them did.  After the show both guys made a B-line for their busses without even a wave to the fans that were waiting.  Thanks guys!

Dolly Parton is another artist that decided to go on tour after a long absence from being on the road.  Well, you would have thought the president was in town.  Seven tour busses and very tight security.  You couldn’t even go anywhere near the busses without getting chased away.  Don’t waste your time.

Newly minted Rock and Roll Hall of Famer, Steve Miller started his summer tour in Cleveland.  I went up after the show to give it a try and Mr. Miller walked straight to the bus without an acknowledgement.

The Doobie Brothers and Journey also made a stop in Cleveland on their current tour.  A friend and I decided to try the hotel to see what we could get.  After waiting a little while, we saw Patrick Simmons and his wife go to the tour bus.  When they got off the bus, I approached and asked if he would sign.  He turned around and said “I don’t sign autographs anymore.”  I was kinda taken aback.  I’ve been told no, I’ve been ignored, but I’ve never been told that someone no longer signs.  I said, “OK, I’m looking forward to the show.”  He smiled and continued walking.

The next day, some collectors were at the hotel to try and score some signatures.  We saw Patrick again and he said “It ain’t happenin’ guys!”  and walked to his bus.  At least he’s consistent!

However, band mates Tom Johnston and John McFee were more than happy to sign and take pictures with the 5 or six guys waiting.  One collector that was there had EVERY Doobie Brothers cd, and Tom Johnston signed everyone and there had to be over 20!  I’ve never seen anything like it.  At least he was the last one in line. Low and behold Journey was also staying at the same hotel.  Steve Smith and his wife went out for a walk and he told us not right now.  Jonathan Cain and his wife left a little later and when they came back from lunch, he signed a couple each.  Ross Valory actually walked over to us and said “I’ll sign two each, guys.”   No problem!  Steve Smith exited the hotel and waved us over and also said that he would sign two each.  A bit later Arnel Pineda said he could only do 1 each because he was running late.  I had to leave because I was shooting the show, but my friends told me Neal came out and did 1 each although they thought he would have done more if his handler wasn’t there. 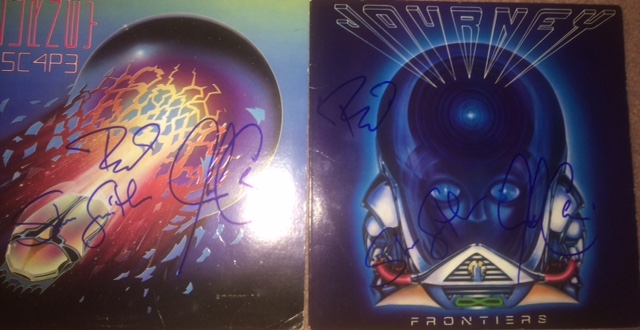 So I was happy to get 3 out of the 5 guys who played on Escape and Frontiers.  Hopefully they come back next summer with Steve Perry!

Now on to some other success stories:

Brad Whitford from Aerosmith and Derek St. Holmes from the Ted Nugent Band teamed up once again and put out a great album.  They are also the supporting band for Whitesnake this summer.  Before the show, both guys came over and signed everything and took pictures.  Both guys could not have been nicer!  I actually bought their meet and greet since I got to shoot the show.  So I got to go on their tour bus and hang out with the guys for a few minutes.  If I would have known they were going to sign before the show, I wouldn’t have bought the meet and greet.  This meet and greet did specify autographs so I ended up getting a few things signed. 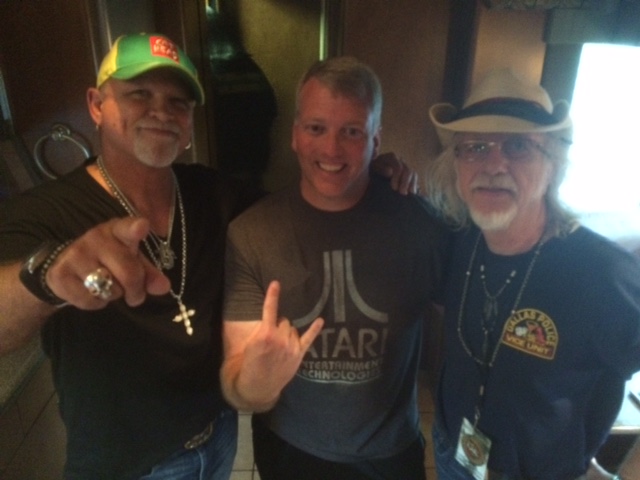 After the meet and greet, I go back to where the few other fans were waiting and David Coverdale’s bus pulls in.  He makes his way into the venue and gives us a wave.  We think it’s not going to happen but a few minutes later a manager comes out and said that David doesn’t have time to meet us, but he is willing to sign one item each for us.  Sweet!  I gladly hand over my Whitesnake album and a few minutes later all of the items came back signed.

Cleveland holds a Jazz Festival every year.  This year was producer Tommy Lipuma’s 80th Birthday so they brought in special guests :  Leon Russell, Dr. John, Al Jerreau and Diana Krall.  After each artist performed, they  left the venue… and all of them signed, even Dr. John.  Al Jerreau was extremely nice and loves to take funny selfies and I got him on my We Are The World lp.  Leon signed from his bus as usual and Diana Krall signed an index card for me but wasn’t too happy about it. Finally, I got to shoot the We Love the ‘90s tour so I decided to get the meet and greet.  The M&G was poorly run.  They lined everyone up to get a photo w/ Salt n Pepa which was no problem.  I was the only one that brought anything for them to sign.  I didn’t want to hold up the photo line, so I went to the end of the line and broke out two vinyl albums.  Salt freaked out and told her people to take a picture because she hasn’t seen those albums in a while.  They were all more than happy to sign. Next was Tone Loc.  He also was a very nice guy.  I did the same thing, got the pic then went back in line to have him sign 2 “Wild Thing” vinyl records.  I told him “Cheeba Cheeba” was my favorite song.   He said “Mine too, I’ma bout to go smoke me a blunt right now.”  He then wrote “Cheeba Cheeba” on one record and “Smoke some bud” on the other.  I don’t smoke at all, but I thought that was a funny inscription that I didn’t ask for. That was it for the Meet and Greet.  No Kid N Play, Coolio, Color Me Badd, Rob Base or Vanilla Ice.  People were pretty upset!  They were expecting to meet the entire tour, but only 2 out of the 7 artists met with fans.  I’m not sure if we will get a refund or not.  We should get something back for sure!

Tone and Salt N Pepa would be cool. I loved all these guys in middle and high school.

Coach thanks for the blog both Dolly and the Doobies are coming to Florida in the next couple of months I may not waste my time thanks for the heads up!