April and May Have Been Okay For Music Graphs

Adding to the music collection has gone pretty well for the past 6 weeks or so.

In mid-April I got to shoot one of my favorite bands, The Darkness.  I actually got to do an email interview with Frankie, the bass player.  The last thing in my list of questions was the remark:  Feel free to add anything else.  To which he responded:  A Bottle of Grey Goose Vodka, please.

Well, I figured I would call his bluff and when I shared my interview with his publicist, I told her I would be willing to give Frankie that bottle of Grey Goose as well as a couple of photo's I took of him in the fall.  She agreed to set something up before hand.

Looking at the discussions on this site about paid meet and greets, I was curious as to what The Darkness meet and greet would entail.  Even though the I was already set up to meet Frankie before the show, I figured I would check out this meet and greet as well.  For 70 bucks, I figured it was worth it.

I got to the venue early, met Frankie and got to hang out backstage for 20 minutes.  He couldn't have been nicer.  He was happy with the 2 8x10s I gave him and signed the same two for me.  He also gave me one of his guitar picks and took a couple of photos.  Very cool 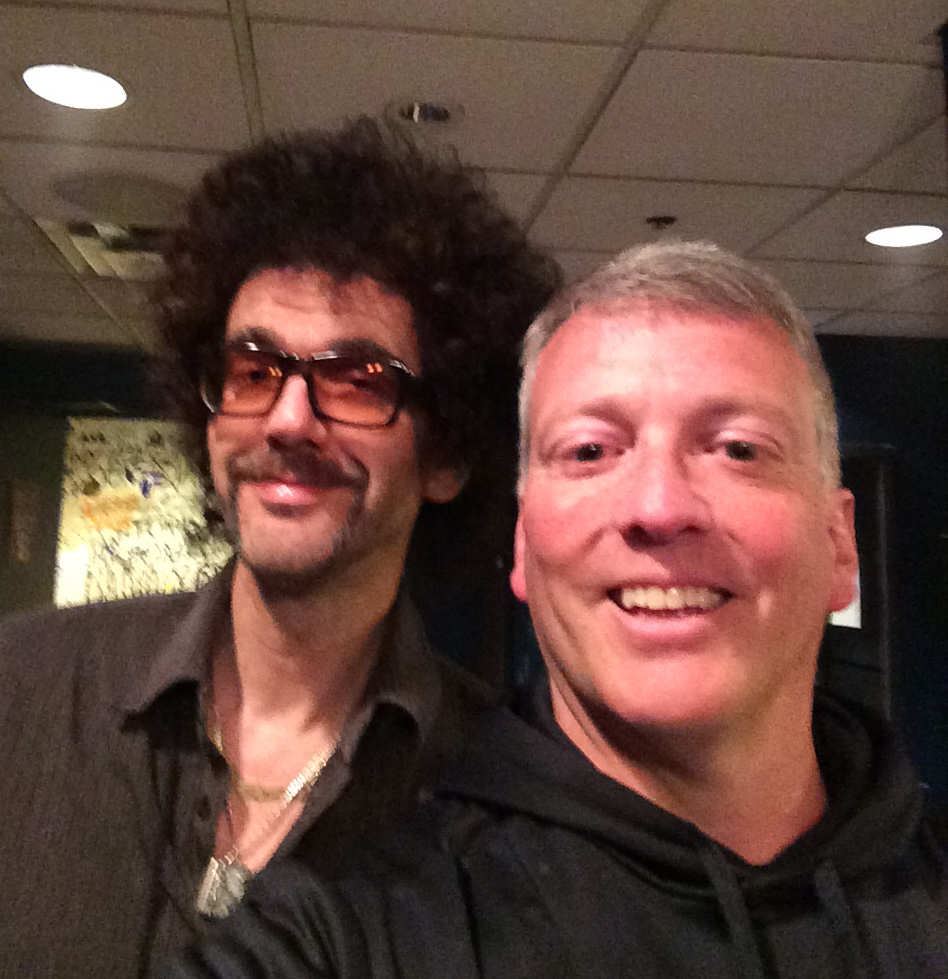 Then it was time for the meet and greet which actually started later than announced.  There were about 20 fans who partook in that.  For $70, you got a t-shirt, we got to go right in front of the stage to hear sound check, then the band came down and signed anything you had and took individual pictures.  Then they lined everyone up and took individual pictures with the entire band.  I thought that was a  pretty good deal.  I ended up getting 2 cd covers, a drum head, and a few pictures that I shot from the Pitt show signed.   Also, a good up and coming band called RavenEye opened the show!  They were out selling their merch in the lobby and were more than happy to take a picture and sign stuff for fans.  Check these guys out, they were one of the best opening bands that I have seen in years. Next, actress and comedian Sandra Bernhard played a cabaret style show which included stories and some music.  The show itself was kind of disjointed but she told the crowd she would be at the merch table after the show, "Cash only, because I don't want to pay taxes!"

Hey, I wish more artists would do that!  She had t-shirts, dvds and some photo's.  I bought a picture for 10 bucks since I didn't have to pay for my ticket, and got my picture with her. Frankie Valli came to town for a two night, sold out performance.  I know some have said that he lip syncs through his show, but do you really expect an 82 year old to hit the high notes?  Come on!  It's feel good music that take you back to a better time.  Anyway, just as he did last year, people lined up single file and his manager said 1 per person.  Mr. Valli has a great autograph and is very friendly to his fans, taking pictures and hugging the ladies. 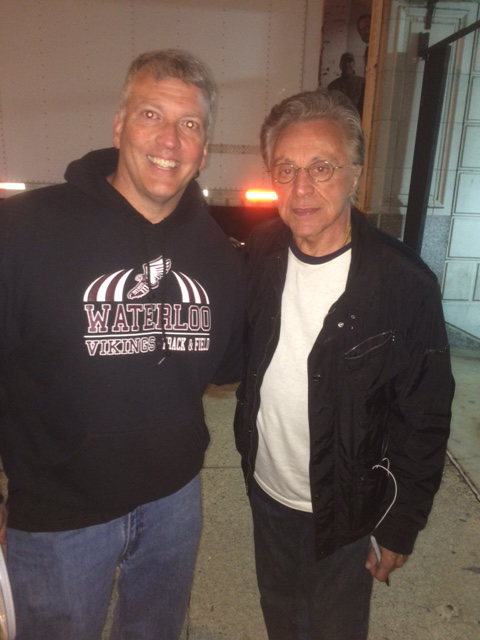 Englebert Humperdink played a show on Mother's Day.  I'm not a big fan, but it's music that my parents would play when I was a kid, so I figured why not try for him?  After the show, about 20 older women, all dressed up for Mother's Day, some in wheel chairs, made there way to the back of the venue to try to get a picture with their heart throb.  Well, they didn't make it very far as security told them that Humperdink's manager said that they didn't want anyone back there.  Really?  How could you deny these ladies on Mother's Day?  Trust me, they asked that question loudly to the security.  They said that they were just doing their job.  Oh well, at least it was an early night for me!

I got to shoot Cyndi Lauper as she made a stop in Cleveland.  She still has a great voice and she has a new album of country classics which she does a fine job covering.  After the show, her manager came out and said: "Does anyone have anything you want Cyndi to sign?"  So the 10 or so people gave him their items, and he took them back stage.  About 15 minutes later, he came back with everything signed.  I got "She's So Unusual' and "We are the World" vinyl signed.  They were also selling her new cd at the merch table for ten bucks, the best part was the inside booklet was signed as well!  So although I didn't meet her, I'm 99% sure those items were signed by her. 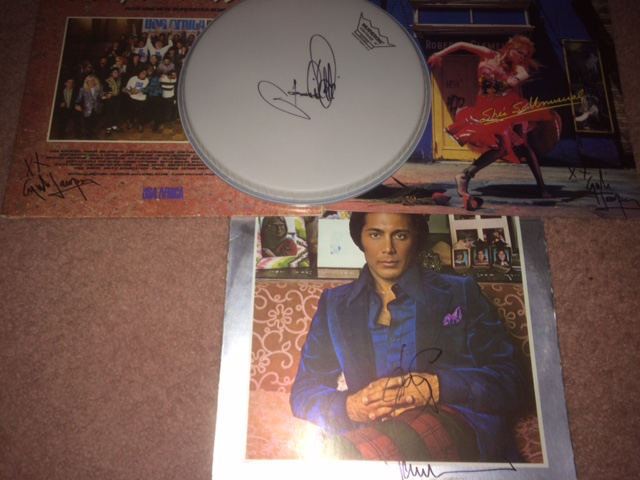 Paul Anka made an appearance at the Rocksino a few days later.  He actually did a nice cover of Purple Rain during the show.  Afterwards, he came out and a few fans asked if he would sign.  He said "Didn't I already get you guys before the show?"  We all said "No!"  So he came over and happily signed and took pictures with his fans.  A total class guy! Finally, Meat Loaf played 2 shows in Cleveland over 3 days.  I couldn't make it to Friday's show, but I went after the show on Sunday to see if I could get "Bat Out of Hell" signed.  There was a pretty large crowd waiting for Mr. Loaf afterwards.  After a while, a manager came up to us and said "Ok, I will take 1 item each."  A couple of people tried to slip in two, but she was very watchful and told people "You already got one."

After a short wait, she came back with the stack and said "You guys sort it out," which we did in an orderly way.   I was very happy to get this iconic album signed. 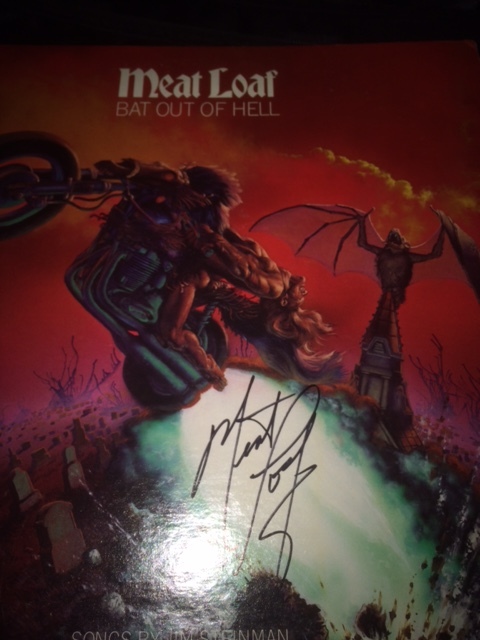 This summer is set up to be pretty good in North Eastern Ohio.  I am going to: Whitesnake/Whitford St. Holmes,  Joe Walsh/Bad Co., Journey/Doobie Bros., Rik Emmett from Triumph and of course- the biggest one of them all- Paul McCartney!

Until next time, keep rockin'!

Yep, I did know that.  Rufus Tiger Taylor.  Very nice chap.  I wish Roger would have been with them!

Hey...I loved finding out they were related. Good stuff.