A Pretty Good Week For Graphs

What a hectic but fun week for me.

Last Saturday, Blue Oyster Cult played a small venue in Akron for two shows.  In a previous blog, I stated that I wasn't going to try for them since I was 0 for 2 in trying to get them after the show and Buck and Eric basically ignored everyone there. 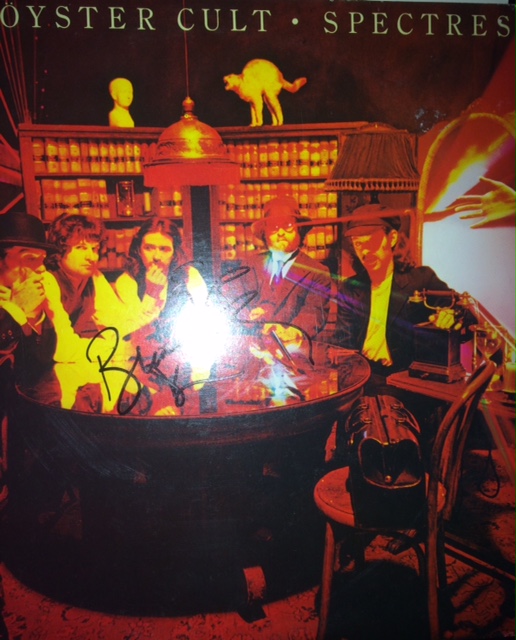 A friend of mine had some previous success getting them before the show and talked me into trying.  I figured that I had an album already so what the heck.  After waiting for a little while before the show, here comes Eric.  We approach him and he said "I'm only signing one each, I gotta go to work."  At least he did one.  Buck arrived a few minutes later and you could tell that he was rushed.  He said, "I'll sign two for you guys because we are running late, I'll do more after the show."  You can't complain about that.  I ended up getting 1 lp signed by both and Buck on another one.  Now if Blue Coupe would come back to town ( 2 original members of BOC and Alice Cooper).

Sunday, guitar wizard Joe Satriani was in town and I got approved to shoot him.  What an excellent show.  I had a pretty good feeling that I was going to get him after the show.  However, there was one big deterrent, the rain.  Five die-hard fans waited out back for Joe to get to his bus.  I had an umbrella at least.  Security was cool as usual.  After about 20 minutes, security guys tell us that the tour manager told them that Joe will not be signing due to the cold and the rain.  Thanks a lot Ohio!  I said that sometimes artists will take items on the bus and could they ask if Joe would do that.  He said no, he won't sign anything.  Thanks a lot tour manager!  At least I got some good shots. 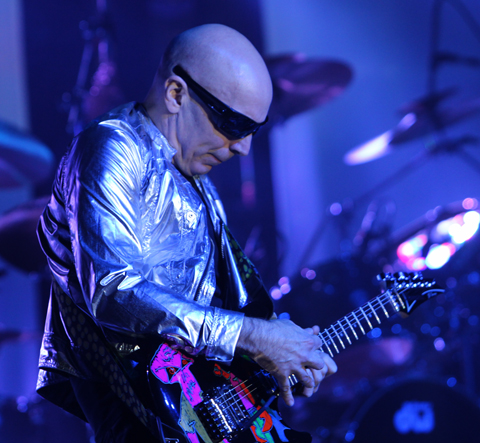 Monday, Ian Anderson was in town to play his Rock Opera "Jethro Tull"  which organized Tull music to help tell the story of the man Jethro Tull who invented the seed drill in the 1700s.  Anyway, I interview Ian for the website I work for and the publicist hooked me up with meet and greet passes for after the show.  Ian is a very interesting man to say the least.  After speaking for a few minutes, he noticed that I had 2 albums.  He said "Well I see that you have some items for me to sign.  Are these for you?"  I said yes.  And he personalized the first one.  Then he said, "Is this second one for you, or is it for Mr. Ebay?"  I said that they both were for me so he personalized both.  The weird thing is, a couple of friends were waiting after the show for Ian to sign and they said he signed 1 item each with no personalization. If he was concerned with Ebay, why not personalize everything?  I was happy to get 2 lps- especially Aqualung, 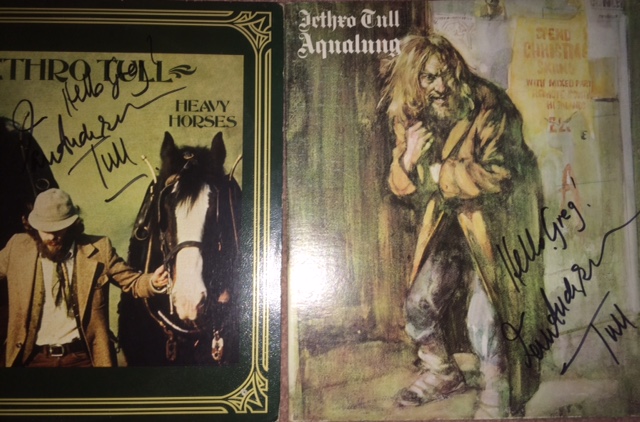 Tuesday- I had a track meet.  Yes, I have a "real job" that pays the bills. Not everything can be autograph related!

Wednesday, A friend of mine got free tickets to see John Waite, formally of the Babys and Bad English, who was playing an acoustical story tellers type show.  His voice is great but he only played 60 minutes and 12 songs.  If you are a headliner, you owe it to the fans to play at least 90 minutes.

Anyway, I met the two original members of the Babys-Tony Brock and Wally Stoker, last fall and wanted John to complete the Head First album that I had.  About 5 fans waited over an hour after the show, and most of the workers from the venue had left.  It was after 11 and I had a 45 minute drive to get home.  Having to get up early and teach the next day, I thought about leaving.  But then there comes a point where you think that you already have so much time invested, what's another 20-30 minutes?  Luckily, I waited as John was awesome and signed for everyone and took pictures.  I have found that most of the time, British artists are way more accommodating than their American counter-parts. Thursday- Nothing.  I actually had dinner with my family- bonus!

Friday- I got approved to shoot and review Gordon Lightfoot.  His voice isn't as strong as it was, but what do you want from a 77 year old?  However, his voice sounded the best on "The Wreck of the Edmund Fitzgerald."  I'm glad I got to hear some of those classic 70s songs in person.  After the show there were about 20 fans waiting to meet Gordon.  His manager said that he would do 1 per person.  Mr. Lightfoot even had his own blue Sharpie! He was very nice and even took some selfies. Sat.- I got up at dawn and got things ready for the track invitational that we host.  All day in the sun from 7:30-4:00 will take a lot out of you.  But I did get to crack a couple of cold ones with my assistant afterward.  Everything turned out great.

It was a pretty good week, four out of five, ain't bad.

Hey, I think there's a song in there somewhere!

Great stuff, as always. I've interviewed Ian Anderson twice (the interview is somewhere on this website). We talk extensively about autographs. He's a bit "one item per person guy." He signed a guitar for my friend and said "Here you go, Mr. Ebay." My fr iend was pissed he said that. I told him...at least you got a guitar signed.

And that's the first time I've EVER heard of Satriani turning down people. He's usually great about signing.

Great one! Please tell us how it went with Elton John!

Comment by Coachgd on April 19, 2016 at 9:22am
Elton was fighting the flu, but still out on a great show. I brought 2 albums and found a guy in the front row and told him that Elton signes before the encore. He can keep 1 if he gets one for me. He said deal. During the encore, Elton signed from one end to the other. I kept my eye on the guy, but didn't see him. I went to find him after the show, but he wasn't there. So he got 2 album covers but nothing signed. I was out 6 bucks, but worth the try.

Great blog! Jonathan Cain is not an original member of the Babys Christopher ! Happy Graphing!