An Eagle and an Eagle -- The Best Golf Story Ever

A few of my friends who are autograph collectors used to get lectures from me. One of them always brought a guitar for autographs. The musicians hated it, and it created a bad vibe for everyone. I always said if you can, wear a shirt that the artist will like seeing. They’ll know you’re a fan and not just an ebay dealer. Of course, when I wore a “Help” shirt, McCartney drove his Corvette right by me, waving and winking, but never stopping to sign for me.

The biggest regret of me not following my own rules, happened when Don Felder came to play the House of Blues in San Diego. My buddy with the guitar met me up there. I had just moved, so the hundreds of rock ‘n roll T-shirts I own were still in boxes. So I didn’t search for the Hotel California shirt (which was an expensive $38 at a concert 25 years ago). Since Felder wrote that song with the other Don...Henley...surely that would’ve warmed him up to my autograph request. 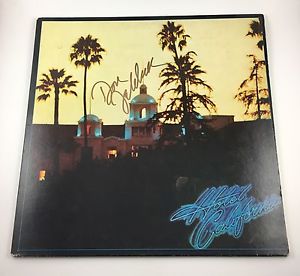 I had a few Eagles albums that were signed by a few band members, and getting his signature on it would’ve been a great addition.

There were two other fans there, one of whom had an electric guitar. He had been emailing Felder’s wife, who assured him he’d sign the guitar. Sure enough...somebody came out and brought him backstage at the soundcheck in the afternoon. Felder wrote one of the lines from Hotel California on the guitar and signed it. I figured the rest of us would be in luck. After waiting an hour, he came out. I’m the first person he saw. I was literally two feet in front of him. He refused to sign autographs saying,, “I’ll sign before the show.”

It was weird walking back to my car five blocks away, and seeing him in a cab, at every red light. My friend stayed at the venue, waited 3 hours, and was rewarded with three signatures.

I bring up that story, because of something that happened recently. A 10-year-old golf fan named Owen Lockaby of Bradenton, Florida, was hoping to get some golfers autographs at the Masters. His mom got him a straw hat like the one golf great Sam Snead wore, that had a button that Augusta National gave out as a tribute to the late Arnold Palmer. She said, “I thought it might get him noticed for some autographs.” Well, it worked beyond their wildest dreams.

Matt Kuchar (the PGA Tour’s leading money winner in 2010 with $4.9 million) got a hole-in-one from 170 yards away. He went and got the ball, autographed it, and handed it to Owen. He said he figured it would make the kid’s day, adding “It’s one of the neat things that we can do.”  (if only every celebrity had that attitude) Kuchar said people had asked if he knew the kid. He said he didn’t, but noticed the Snead-style hat and thought...that’s the kid I’m giving it to.

So, if you’re hoping for autographs -- hats and shirts never hurt. It’ll certainly set you apart, and lets the celebrity know you’re a real fan.

Perhaps the hole in one helped as well! ;)