Owner Jerry Gladstone trumpeted ARA as the world's largest seller of autographed rock 'n' roll, and they had an eye-popping selection of rare, signed, classic rock memorabilia. Garceau spent over $88,000 with ARA in 2006 and 2007, snapping up Beatles-signed "Abbey Road" and "Sgt. Pepper's" albums; guitars signed by the Grateful Dead, Wings, and 32 Rock Legends; Bangladesh, Dylan and Woodstock signed posters, and more.

One of his favorites? A set of Jimi Hendrix Experience autographs, framed with, according to the COA, an "Original, August 19, 1968 First Edition Concert Poster for a Jim Salzer concert at the Earl Warren Fairgrounds in Santa Barbara, California." The price? $3,950. 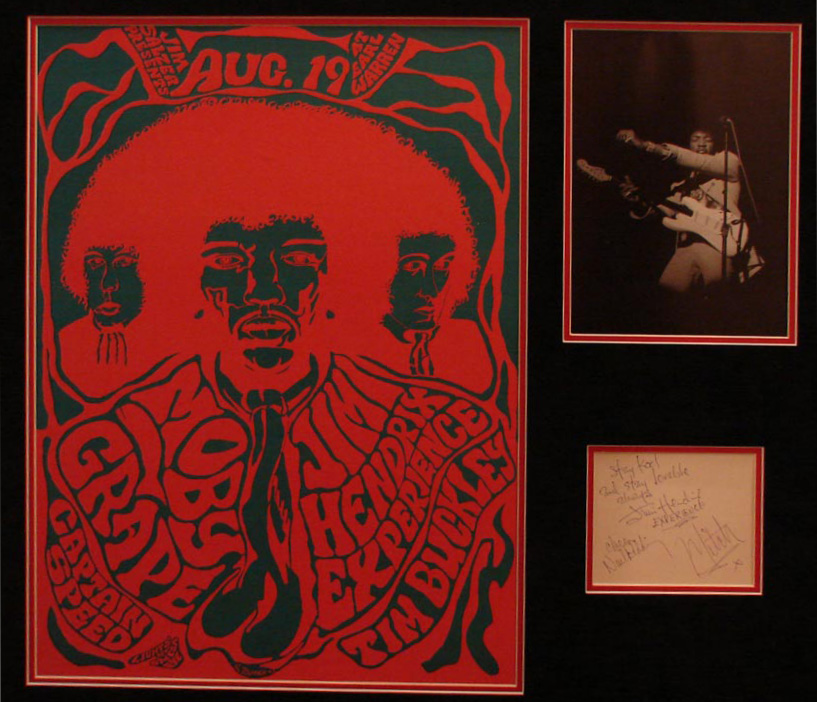 Garceau was particularly proud of that purchase. He checked prices before he bought, and found that firsts of the poster alone were being offered at $6,000. A set of Jimi Hendrix Experience autographs were at least $3,000, so he was getting $9,000 in value at less than half-price. A year after his last purchase, the collapse of the real estate market left Garceau sitting on new homes that were digging into his savings, so he decided to sell his most expensive pieces: his $16,500 signed "Abbey Road" and $21,500 signed "Sgt. Pepper's" albums. But not long after he listed them on eBay, eBay cancelled the listings for authenticity concerns.

Garceau was shocked. After all, not only were they sold by long-established American Royal Arts—they were authenticated by a so-called court-approved forensic document examiner, Christopher Morales. After getting nowhere with ARA, Garceau contacted a major auction house, which confirmed the albums were forgeries. Shortly thereafter, the auction house connected Garceau with Autograph Magazine, and we recommended he have all of his autographs evaluated by the leading rock authenticator, Roger Epperson Authentication.

The news was not good. The only genuine autographs ARA sold Garceau were on a 2006 Rock 'n' Roll Fantasy Camp poster signed by musicians in attendance. It was the only item not authenticated by Morales. Facing an almost complete loss of his $88,000, Garceau contacted rare poster dealer Wolfgang's Vault to see what he could reasonably expect to get for the poster in his framed Hendrix display. They told him he needed to remove the poster from the frame to check the condition and confirm it was a first printing, because second printings are only worth a few hundred dollars.

The obvious difference between the two is that second printings have a red border all the way around, while first printings don't. The edge of Garceau's poster was covered by matting, so while it looked like a first printing, the matting had to be removed to confirm it. 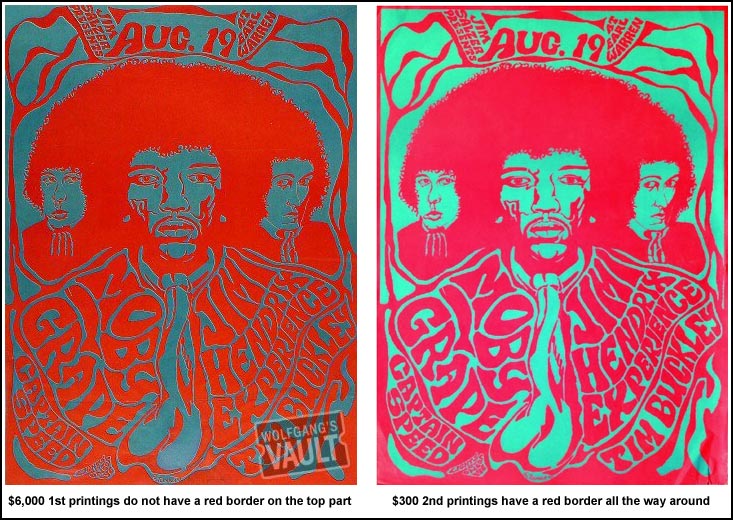 This is what he found: 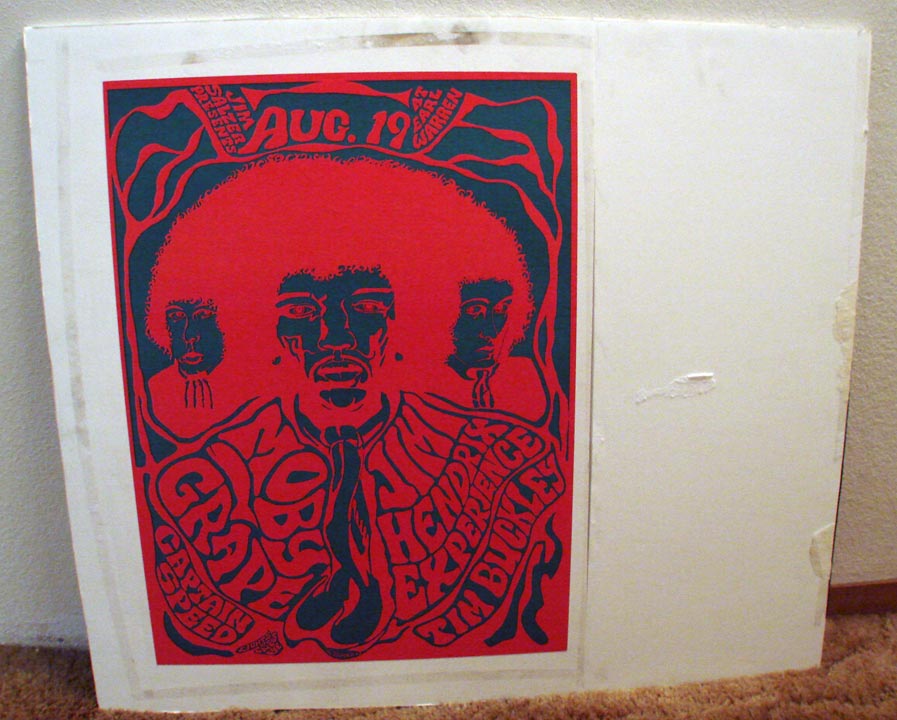 It was a second printing poster, which American Royal Arts framed to hide the telltale border. One that would be worth $300 or less, except for one thing: it was cemented to it's foam core backing...rendering it literally worthless.

Everything Garceau purchased from ARA was a completely worthless fraud...except for the Fantasy Camp poster worth perhaps $500. I'll show you each piece he purchased soon.

ARA owner Jerry Gladstone has been the subject of an ongoing FBI investigation, and American Royal Arts filed for an Assignment for the Benefit of Creditors, a type of Florida bankruptcy, in 2010. But that hasn't stopped Gladstone from turning several ARA locations into galleries for his two new companies, The Pop Culture Vault and Beyond the Cage. While he has hopefully learned his lesson about selling forged autographs, we assume that Gladstone is still selling fraudulently represented posters and other memorabilia—and ruining even those by gluing them in place.

Garceau filed a claim, but while Gladstone has reportedly paid close to a million dollars or more out of his own pocket to settle actual or potential litigation that might have kept ARA's liquidation from going through, Garceau and others in his position we've spoken to have heard little from the administrator handling the case.

At this point, things don't look good for any of them.

Why is it I don't seem even the least bit surprised that Jerry Gladstone of ARA would do this?  I wish there was something more I could do to help him out.

Fake autographs and a cheap poster permanently adhered to a backing board...talk about adding insult to injury. What a nightmare.

They didn't even get the year right on the COA. The show actually took place on August 19, 1967.

I forgot to post American Royal Arts' COA...thanks for mentioning it, Ballroom. Going up now.

Ha ha. Those second printings are pretty common. You can get one from Authentic Hendrix for $40.

In my opinion there are hundreds of thousands (maybe millions) of people who unknowingly own junk certed by Chris Morales, Forensic Investigator.   What a stinking shame!!!!

Well, there's tell tale proof that MoralASS costs the collecting industry more than the "$10.00 Mantle" they spew about ARE YOU LISTING MORALLESS PROTECTORS!!!!!!!!!!!!

$88,000 is NOT $10.00....are you listining Travis, The Carpetlanderia, The Vanderdopen, sharpie et al????? This shining light you speak of, Christopher Moraless, Forensic Rubber stamper, is every bit as whacked and dangerous as the mess that the ABC's have caused. IT"S ALL A COMPLETE MESS SO let's not sugar coat it. THIS IS A SICKENING STORY!

Yes my collecting friends MORALLESS COST THE AUTOGRAPH INDUSTRY much more than pennies on the dollar. This Moralass guy is a FESTERING BOIL on the autograph community at large and the soorer he is POPPED the better.

This may be a naive question, but why are these guys not in jail already? Isn't there a ton of proof that they continue to engage in criminal activities. And why is Christopher Morales STILL selling fake items. What am I missing here?

Comment by Rick Garceau on January 9, 2012 at 6:33pm
This was an expensive lesson to learn. I am grateful to have a forum that my story can be told, and hope it will prevent the same thing from happening to others.