Watch Out For This Guy, Brian Burkel, of AutographsAuthenticationStore.com

I recently ordered 2 signed guitars and 1 LP. The guitars signed by all the members of Led Zeppelin and the LP by all original members of The Guess Who.

They were a gift for my friend in New Jersey who is like a brother to me. You see I'm a 63 year old vet, I'm disabled and in a wheelchair due to dealing with RA for 20 years now along with…

Immediately below are links to the story.…

Vance9506 Must be Mario Lemieux himself

I know he just won the Stanley, but I'm thinking Mario must have opened his own memorabilia store on ebay. That's the only thing that can explain this guys stuff.

I guess Ebay has found a way to get more money from their honest sellers who list and sell authentic autographs.

I recently, for the first time in a long time, decided to list one of my items starting with a .99 cents starting bid.

I usually use "Buy It Now/Best Offer" for the few listings I submit.

Due the fact that it is impossible to compete…

A little over a month ago I sent an email to Ebay about obvious shill bidding.

This has been going on for months with Ebay seller Stevew6.

Ebay seller Stevew6 is a consistent seller of GFA-certed forgeries.

What exactly is this eBay seller doing? Is this considered counterfeiting?

I suggest you review the items for sale by an eBay seller named: presidentialcollectibles

It appears that this seller is using a new 2012 autopen machine and is counterfeiting, ( if that is the correct term?), celebrity autographs.  The seller's description states that, "These signatures cannot be found anywhere else", so it is unclear if anyone else is also currently using this autopen device. Thus far, one can purchase a Neil Armstrong, John Lennon, Marilyn Monroe, Bruce Lee, Babe…

Operation Bullpen and the Marino Family Forgery Ring: Has anything changed?

Over the past few days I have been re-reading Operation Bullpen, the story of the Marino Family Forgery Ring and how the FBI took them down. The last time I read it was several years ago.

ISITREAL.com and Markus Brandes Autographs had been recommended by N-TV television 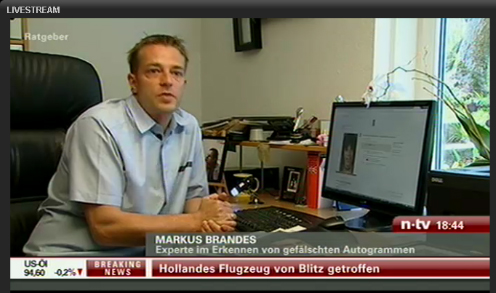 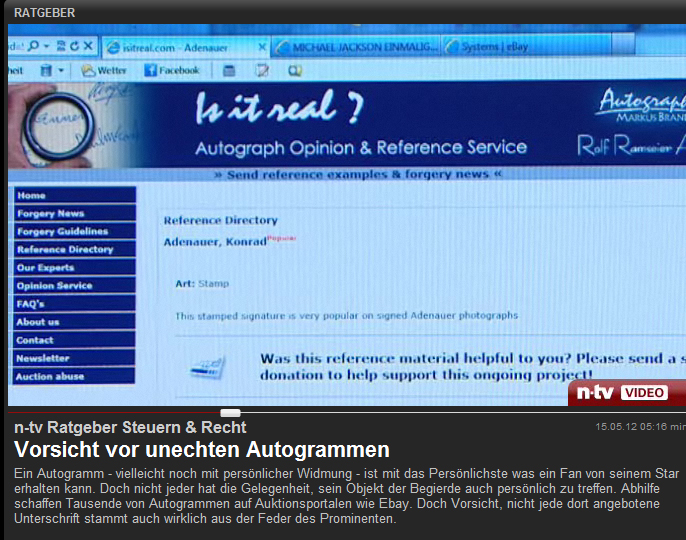 Owner Jerry Gladstone trumpeted ARA as the world's largest seller of autographed rock 'n' roll, and they had an eye-popping selection of rare, signed, classic rock memorabilia. Garceau spent over $88,000 with ARA in 2006 and 2007, snapping up Beatles-signed "Abbey Road" and "Sgt. Pepper's" albums; guitars signed by the Grateful Dead, Wings,…

MICKEY MANTLE AUTHENTIC EXEMPLARS... READ ALL ABOUT IT!

I just wanted to post these here to see what Fudd the Lowly Mantle Collector can do to help stop the flood of forgeries into the market place. The goal is that we can all start educating ourselves before we buy. To see what a beautiful signature the Mick had, and to learn to distinguish it from the obvious forgeries at first glance. Something TTA, STAT, DREW MAX, GAI GLOBAL (Baker certs) My Favorite Players Reborn (Tony…

Christopher Morales and the sellers who use him claim that as a "forensic document examiner," his "scientific methods" and exhaustive procedures have earned him "court-approval." They say this makes him far superior to any other kind of autograph authenticator.

Forensic document handwriting analysis generally requires at least 10-15 known handwriting samples, preferably from the time period of the writing being analyzed. The "scientific" part is primarily ink and paper analysis to try…

What To Do if You Bought Fake Autographs: Info to help you get your money back

With the expansion of information found on the internet, it's likely that many of these unknowing buyers are going to eventually find out that they've been scammed from one of the many major autograph forgery dealers out there.  With this being said, it's absolutely not too late no matter how much time has gone by for you to seek redemption.

First, be sure the items you purchased are 100% forgeries.  Start by doing a Google search for the seller's name along with the word "Scam" "Fake…

His was a time before eBay, so John Lennon wasn't that jaded about signing autographs—if you could get to him. But few fans carried records around to be signed back then, so any album signed by Lennon since the early '60s is rare.
But not at Forever Legends, an autograph dealer in suburban Los Angeles. While Beatles experts might not be able to count up 10 Lennon signed Imagine albums, Forever Legends has had at least 23 on their website from 2007 to…
Continue

A Tsunami of ???? Autographs on eBay

The number of questionable autographs of Mickey Mantle and Ted Williams on ebay has reached epidemic proportions.

There are also a good number of Sandy Koufax and Joe DiMaggio questionable autographs on ebay.

Beware those with Nicholas Burczyk COA's. I have yet to find one of those COA's that I agree with. Despite my posts on various places including my own blog on my website, nobody has been able to prove to me that Mr Burczyk actually ever authenticated a baseball…

The rumors circulating autograph hobby are true. Since 2008, the New York Office of the FBI has been investigating Florida-based autograph and memorabilia gallery chain American Royal Arts and its owner, Jerry Gladstone, over the suspected trafficking in rock and roll forgeries. According to marketing claims by Gladstone, American Royal Arts was the world's largest seller of signed music memorabilia, specializing autographs of the Beatles, Elvis, The Rolling…

The auctions sites do not have a clue what is being done with autographs on their sites.

The prices that these autographs are auctioned at are startlingly low.

It seems that eBay sellers are buying these autographs on these…