From San Diego to Los Angeles/Celebs, I’ve gotten them all

But I ain’t ever got Stan Lee/He created Marvel

At Comic Con I was a dumb kid/And he signed everything for all ! 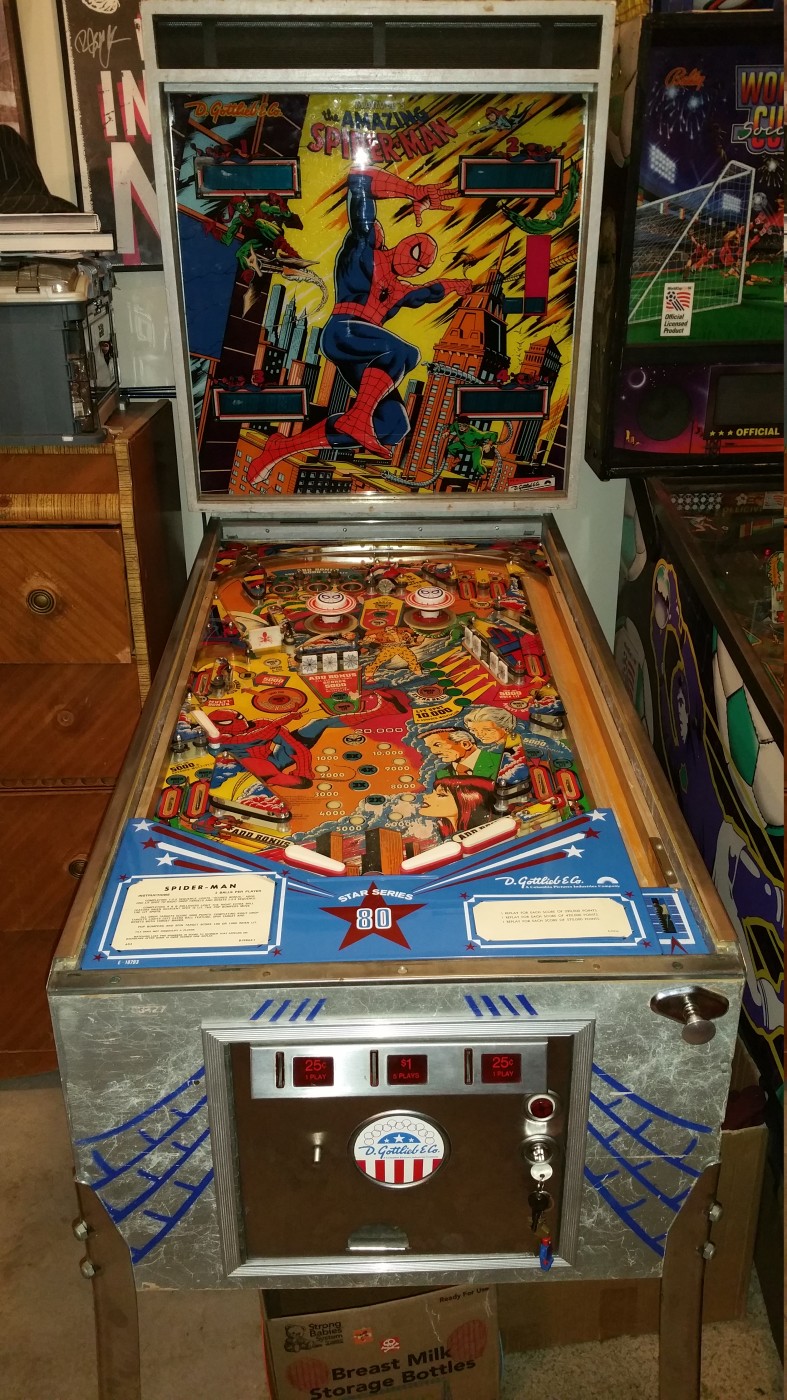 My apologies to Pete Townshend for that intro, but I was thinking about pinball machines when I heard about Stan Lee passing away at 95. As someone that was never really into comic books as a kid (or adult), my exposure to Lee came through all the superhero movies. Most people know the Marvel films always gave us a fun cameo with Lee. And most comic book collectors know, that San Diego is the home of Comic Con, where Lee always held court and was treated like a king.

There were two times I ran into him there. On one occasion, I just nodded at him and he said hello. Another time it was in a panel, and he came in to speak with the people onstage. It was a small panel, with perhaps 50 people in the room listening to them talk. I figured I’d get his autograph on the program, but in the middle of it, he ran out of the room. He had gotten sick (I found out later he immediately had a tooth removed). I figured I’d get his signature at another time, but I kind of stopped going to Comic Con. The crowds were just ridiculous, and every time there was an autograph I really wanted (like author Ray Bradbury), you’d have to sign up hours before just to be able to wait in line for an hour, and only a limited number of people would get the signature. This happened for me with Matt Groening (The Simpsons), too. One time at Comic Con I saw a guy carrying around some big items. From far away, I thought they were animated cells. It turns out, they were parts of pinball machines. He got Chewbacca (tall actor Peter Mayhew, who is always there charging $25 a signature), and was on the hunt for Stan Lee. Everyone was telling him he’s the best autograph signer and he’d easily get the signature. I’m not sure if he ever did. I just wondered what you would do if autographs smeared off the glass, or if people playing the machines would have them wear off. A friend of mine won an autographed Les Paul guitar from a radio station, and he ended up getting other guitarists to sign it (but only if they also played a Les Paul). He kept playing the guitar and at one point, I noticed the signatures were smearing off. I warned him he should stop playing it, but he didn’t listen. Friggin’ musicians. But I digress. 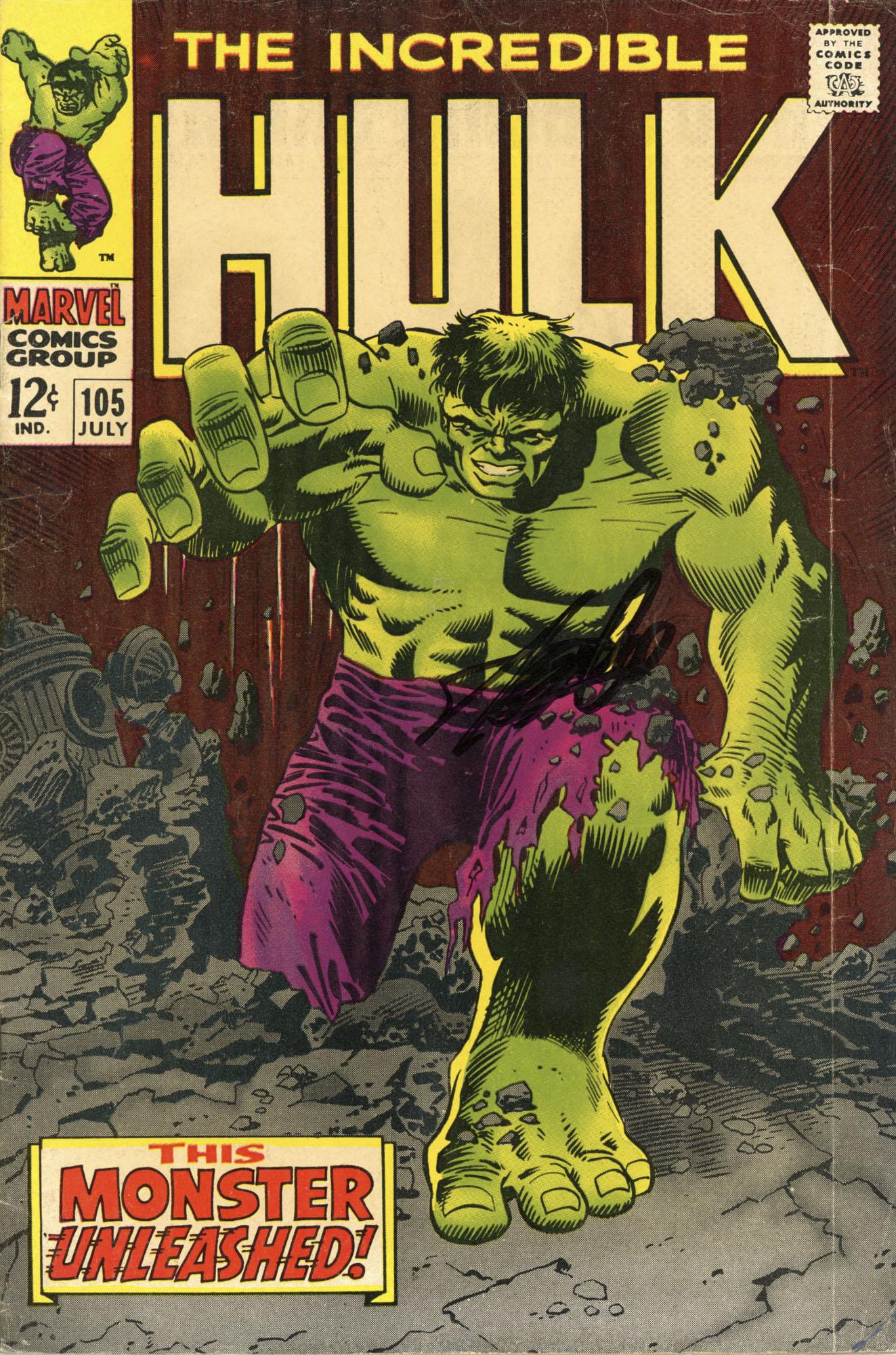 When I went to visit a friend that was living in Salt Lake City, I read a story about a guy (Ray Kimber) who owned a cable company, and collected pinball machines. At one of the smaller Con’s going on in Utah, he brought pinball machines to get signed. I’m not sure if it was the same guy I ran into in San Diego. The paper showed a picture of him standing next to Lou Ferrigno, who signed his Incredible Hulk pinball machine. It cost him $200 for the signature, and another $100 for the photo. He gladly paid that, saying you need proof. Whatever. For that price, I’d just take my own photo while Ferrigno is signing it.

The guy used a red paint pen on the headboard for reasons I’m not sure of.

Kimber used a 17-foot trailer to haul his machines to various conventions to get signatures, and he brought along a Batman machine for Adam West and Burt Ward to sign, and a Spider-Man pinball for spidey creator Stan Lee. 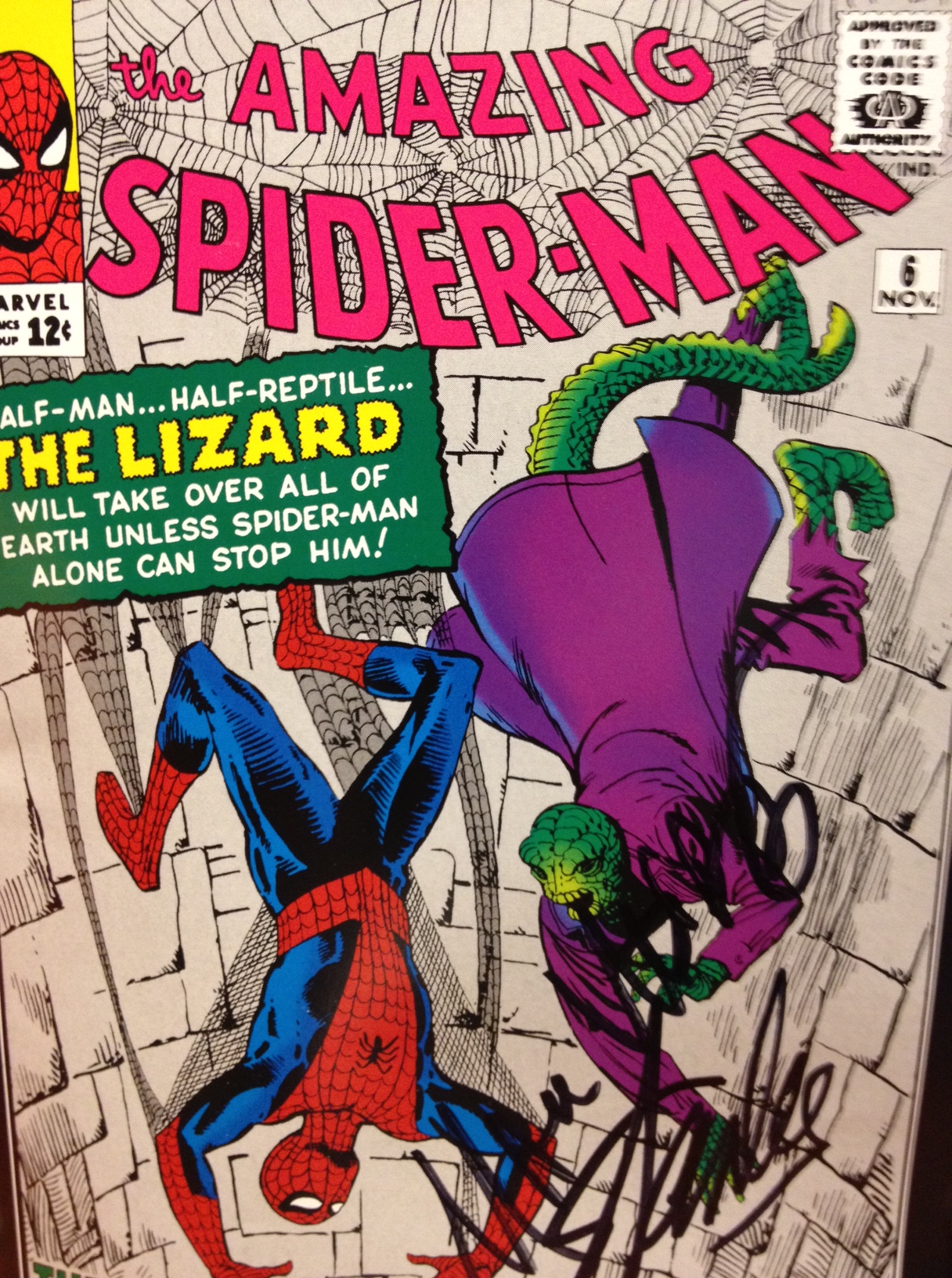 When relaying this story to my wife, she told me about sitting next to Stan Lee at Comic Con, and the story blew me away. I incredulously snapped,, “You know I collect autographs! How is this the first time you ever thought to tell me this story?!”

I had her write the following paragraph about her experience:

In 2003, I attended my third San Diego Comic Con. During a break in the action one evening, i checked out the Heritage Auction to benefit the Comic Book Legal Defense Fund. As always there were some cool, original drawings by famous comic book artists and interesting memorabilia. But the main item was truly special - the pinball machine that Stan Lee kept in his office at Marvel Comics. And, it was signed by every artist who ever set foot in his lair. It was covered. People were swarming around it to get a good look at all the signatures. I took a seat (mostly to rest my feet after a long day) and waited while they got the auction started. A few minor items sold quickly then they announced Stan's pinball machine, and the man himself quietly entered the room and slid into an empty seat next to me. As the bids got higher and higher, he seemed amazed. Then bids stalled. I turned to Stan and told him that he should sign the machine too so it would sell for more. He didn't think that would raise the price. Who would want his autograph? Right. He went up and signed it which jump started the bidding another $7000. It's no wonder that Stan's catchphrase was "Excelsior" -- onward and upward, indeed. 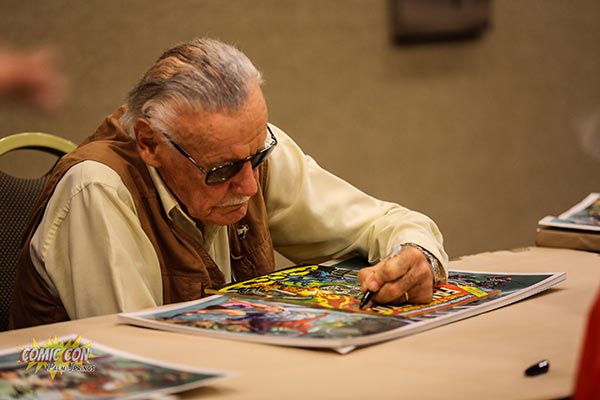 Side note: after my wife wrote that, I searched online to see how much it eventually sold for. I couldn’t find that, but did find this description of the item: Spider-Man Pinball Machine from the collection of Stan Lee (1980s). A lot unique in the annals of auctions, offered here, in all its gaudy glory, is Stan Lee's personal Spider-Man pinball machine. Decorated by some of Ol' Webhead's most famous artists (including Ross Andru and John Romita, Sr.), this is a one-of-a-kind item from Spidey's legendary co-creator. In Stan's own words, "The Spider-Man pinball machine being offered by Heritage Comics Auctions is my personal property. I was assured when I acquired it that it was one of the very first Spider-Man pinball machines ever made. I've had it for decades, and throughout that time it has resided in my office, which, nomad that I am, has been relocated often. Regardless of my office's location, this machine went with me and has never been in storage. Over the years, I have spent countless frustrating yet perversely enjoyable hours attempting to play on it, as have numerous colleagues, friends and business associates (some quite famous, though a combination of modesty, shame and my legendary bad memory prevents me from divulging their names here) during their unrelenting pilgrimages to my office. In fact, I think many of these scions of arts and industry came over JUST to beat me up at pinball. I hope its new owner will be a better player than I am." In addition to the honor of winning the machine itself, the successful bidder will win the right to go head-to-head with Stan "The Man" Lee himself. Stan initiated the challenge himself when he said, "Let him who is without fear venture forth to do battle upon the multi-hued table of valor! The gauntlet hath been thrown, the challenge hurled! Now sound ye the trumpets and beat ye the drums, for as surely as night doth follow day, Thou Who Art Worthy shall meet the Knight of Excelsior in cataclysmic combat for the majestic mantle of-- Pinball Immortality!" The machine is in good condition and will certainly be a prized item in any collection.

Cool, and very interesting. I may not comment all the time, but I do enjoy your Stories.

Thanks for the kind words, Tim. Greatly appreciated.