About 29 years ago, I was having dinner with a couple of women I’m friends with in downtown San Diego, and we walked out of a restaurant and nearby was a concert hall. There was a tour bus with about 50 fans surrounding it, screaming as if The Beatles were inside. We walked over to see what the fuss was about. When we asked who the bus was for, someone told us Morrissey. My friend Angela (who coincidentally enough, is having a birthday today) went nuts. She’s a huge fan, and she insisted we hang out to see if we could get his autograph. Well, I’ve always been into hanging out to try to snag a signature, so I was game. 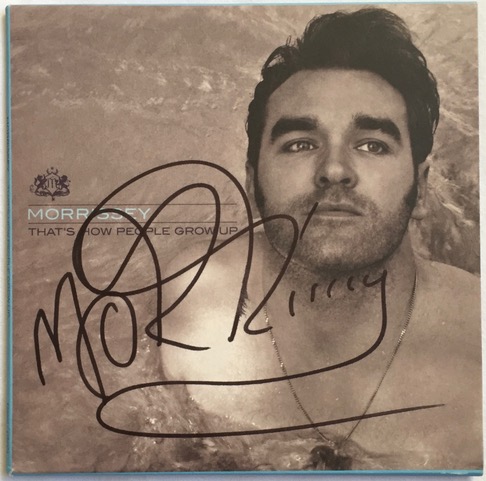 Within 15 minutes, Morrissey came out, dressed all in black and wearing sunglasses. He was pushing people away from him. Just as he was about to get on the bus, someone shoved an album in front of him with a Sharpie. He signed it, and then threw it like a frisbee about 50 yards away. The crowd all scrambled for the record (I have no clue if the right person got it back).

That’s the only time I ever came close to meeting Morrissey (my friend Doug has gotten The Smith’s guitarist Johnny Marr a few times).

I didn’t think about that story because it was Angela’s birthday, but because last night, the 59-year-old morose singer had a concert again in San Diego, but this time instead of him getting pushy with fans, some of them got aggressive with him. A mob jumped on the stage during an encore at the sold out (2,200 seats) Copley Symphony Hall (during “Everyday is Like Sunday”), and someone apparently struck him in the face.

The person was quickly put in a chokehold by security, and Morrissey left the stage soon after. He refused to do the meet-and-greet that he usually does following shows. TMZ reported this like it was a vicious attack, but Morrissey’s management said it wasn’t a big deal, just some eager fans that wanted to touch him, not attack him.

To Morrisey, Meat is Murder...and apparently so is “meet.”

Great story, Josh. Morrissey's notorious for being mardy and a drama queen. I doubt that the incident was anything major. He once walked offstage during a festival in the UK in the mid nineties because someone in the crowd threw a daffodil which hit him on the head. He's a sensitive soul is our Mozza.

I once witnessed him in 1991, during the Your Arsenal Tour at the Sheffield City Hall. Morrissey fans are some of the most hardcore i've ever witnessed. He's worshipped. The energy inside the venue was could be compared to going to a football match. Great gig - and he managed to perform for the entire show without walking off like a spoilt child. Which is surprising really because on the reverse of the concert ticket there was a MacDonald's promotional offer, where you could trade in the ticket and receive a free Big Mac! Ho ho. If he'd have known that to begin with i very much doubt he would have shown up!

Well, on one of the American talk shows (Jimmy Kimmel), something happened where he wasn't going to appear on the show because the other guests that night were from some reality TV show in America that had hunters (can't think of the name of the show right now). So, they decided to schedule those guys on a different night. Then Morrissey thru a fit because one of the advertisers on the show was a restaurant (which, of course, sold meat products). Just insane.

It wasn't too long ago (circa 2008 i think) that he refused to play because he could smell meat being cooked within the festival he was playing! I'm pretty sure that was somewhere around your neck of the woods, Stateside.

“Nobody tried to punch M last night. Morrissey's fans are not malicious. The fans were simply doing what they have been doing for almost 30 years. Trying anything they could do to jump onstage and touch him, or hug him. The fan in question was certainly more aggressive in reaching out for him than most, so security had to do their job and subdue the fan. That's all it was. In the end no one was hurt, and no one was arrested.” - Peter Katsi

So....I am new to this site but I came upon this post and I just can't refrain to stop myself from commenting. I'm not trying to stir the pot or get anybody's motor running and I realize that this is an old post but regardless of when it was posted it is still horse s***. It's either totally bogus or your sir have an interesting way of remembering things combined with getting some facts and details completely off. I am a fan and I have had the opportunity to be backstage and get autographs several times throughout the years, this goes back to 1997. This story is just too out of character. While Morrissey is very pretentious and he can be a snot a lot of the time he is very respectful to his fans in person, he would never throw an autograph for the people to chase like dogs to a ball. And the "typical after show meet and greets" that you speak of, there is nothing typical about that. In fact the band plays "typically" a minimum of 3 minutes and 20 secods longer after Morrissey leaves the stage and then they proceed to throw out drum sticks and picks just so that Moz can leave the venue immediately as to avoid any chaos with fans. Lastly, the easiest give away to this tall tale is that Morrissey's first live appearance in San Diego was in 1991 in support of his sophomore release "Kill Uncle", "Your Arsenal' was not released until half way through 1992. P.S. The picture of the signed single that was posted is a total fake without any doubt, I won't even begin to state it's faults. No hard feelings I just get sick of hearing all of these jolly animated stories because it makes those of us with legitimate ones sound just as ridiculous.....these tall tales just muddy the waters

Wes, I appreciate you chiming in. And, the autograph photo may be a fake. But, my story about him throwing the autograph IS NOT. I was there, and it was in the early 90s, perhaps. I can't remember the exact date or year, because as I said...I'm not the biggest fan. If you need me to provide evidence from my two friends that were there, Myrna and Angela, I will gladly do that. Even though Myrna is suffering thru cancer treatments and isn't doing well, I'm sure she'd have no problem verifying this story, or her roommate Angela, who have both been friends of mine since 1990. We saw it happen. So, for you to claim these are fake stories, is ridiculous.