Chris Morales appears in court for an autograph case, read about the results.


I have been in contact with Judge Lovert Bassett in reference to his lawsuit against Autograph Central (Bryan Slaven).  Mr. Bassett purchased eight signed photographs from Autograph Central (Bryan Slaven).  The eight signed photographs contained a total of ten (10) signatures of Bela Lugosi, Boris Karloff, Lon Chaney and Elsa Lanchester.

The trial was held on March 11, 2011 at the Lake County Illinois Courthouse.

Mr. Bassett’s total purchase price for all eight photographs (a total of ten signatures) was $7, 345.00.

Mr. Bassett, after he took possession of the eight photographs, decided to have PSA examine the ten signatures.  PSA deemed them as “not authentic.”

According to Mr. Bassett, when Mr. Morales was questioned by Mr. Slaven’s attorney, Mr. Morales referenced “The Autograph Collectors” handbook, photographs from the “Smithsonian Museum” and the Library of Congress as sources for exemplars that he uses to authenticate autographs.

What is a "Forensic Investigator" utilizing "State Of The Art Technology" and "Forensics" to examine signatures, doing with the "Autograph Collectors Handbook?"

According to Mr. Bassett, Mr. Morales also testified that he uses business contracts, checks and other financial documents as good sources for exemplars because by their very nature they are most likely to bear the authentic celebrity signature.  However, when questioned by Judge Fusz, Mr. Morales admitted that the COAs he issued for the eight signed photographs (10 signatures) were based on a comparison analysis to each other, rather than on verified third-party exemplars.

Judge Michael Fusz made the decision to throw out both Mr. Morales’ expert testimony and the exemplars Mr. Morales said he used to “authenticate” all ten signatures.

According to Mr. Bassett, “BRYAN SLAVEN GAVE ME A FULL $7,345.00 REFUND A WEEK BEFORE THE COURT WAS SCHEDULED TO RENDER A WRITTEN JUDGMENT.”

If Chris Morales, Forensic Investigator, charges $75.00 to authenticate an item, and if that item has 27 signatures (link below), and if Mr. Morales spends a minimum of two hours on each signature, that equals 54 hours.  That comes to an hourly rate of $1.38.

I have both spoken and exchanged emails with a number of “Forensic Document Examiners.”  They are not cheap.  I emailed a few FDE’s a photo of an Abraham Lincoln cut signature   and asked for rates to examine it.  The absolute lowest rate I received was a $700.00 flat rate fee.  That was for only one signature.  I also sent a photo of a baseball that was signed by thirteen Presidents (one that was from Coach’s Corner Auctions and certed by Mr. Morales).    The lowest rate I received to examine it was $2,000.00.  The most expensive rate I got back was $18,000.00.  But here’s the real kicker.  The majority of FDE’s that I received a reply from wrote me that they could not examine certain pieces because of the lack of genuine exemplars.

Think about this; if the majority of Forensic Document Examiners (at least the ones I communicated with) had to refuse work I offered them due to the lack of genuine exemplars, then what is Chris Morales using as exemplars for all of the vintage and historical cuts that he “authenticates” for Coach’s Corner?  Most FDE’s require at least ten genuine exemplars.   What exemplars is Chris Morales, Forensic Investigator using to “authenticate” historical cuts of George Washington, Abraham Lincoln, etc.?

This month’s Coach’s Corner Auctions for the month of July is up and running.  Up for auction are cut signatures of Bonnie Parker and Clyde Barrow (separate auctions).  Exemplars for both Bonnie and Clyde’s signatures are almost non-existent.  What exemplars did Chris Morales use to pass them as genuine? 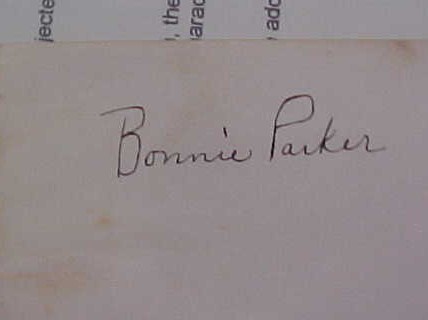 Mr. Morales is more than welcome to respond to the comments here.  If he disputes any of the comments here I will welcome his reply.  I curiously welcome his input in reference to the exemplars he uses for his examinations of George Washington, Abraham Lincoln, Mike “King” Kelly, Eddie Plank. Al Capone, Ben “Bugsy” Siegel, Pretty Boy Floyd, Christy Mathewson, Walter Johnson, Geronimo, Josh Gibson, Joe Jackson (baseball), etc.

How many Beatles signed baseballs have you certed as authentic, Mr. Morales?   Coach's Corner Auctions (Lee Trythall & Scott Malack) have another one listed this month and it is certed by you.  Do you ever question where they come from, Mr. Morales, Forensic Investigator?

The hobby is interested in your reply, Mr. Morales.  Also, Mr. Morales, you are now on Ebay’s banned list.  How does a “Forensic Investigator” with the credentials that you claim, get on Ebay’s banned list?   The below signed baseball on Coach's Corner Auctions is certed by you.  Look at the Babe Ruth, Mr. Morales.  Did you really spend two hours "forensically" examining that Babe Ruth signature to determine that it is authentic?

Maybe you can explain this Mr. Morales.   The Coach's Corner Auctions that ended on May 20, 2011, contained 86 auctions certed by you.  Those 86 auctions included a total of 406 signatures.  If you spend a minimum of two hours to examine each signature that crosses your desk, then it took you 812 hours just to "forensically examine" those 406 signatures.  Can you explain that to the hobby.  And that was just for Coach's Corner Auctions.  What about another auction house (I refuse to mention their name) that you "forensically examine" for?  I watch that auction house on a daily basis and there are at least 10 auctions that are listed with your cert.  That means in any given month, you cert at least 300 signatures a month for them.  That's another 600 hours spent "forensically examining" autographs for them.  There are 720 hours in a 30-day month.  The total number of hours explained here totals 1, 112 hours.  And that's just for one month and two companies that you perform "Forensic" examinations for.  According to Mr. Bassett,  Mr. Morales testified that he does work for 6-8 companies. What about the other 4-6 companies that you perform work for?  How many other "forensic" examinations do you perform on a monthly basis for those 4-6 other companies in addition to the  406 items you did for Coach's Corner Auctions and the other 300 items you examined for that other auction company that I will not name?  Please explain that to us.  If my numbers are incorrect, Mr. Morales, please feel free to clarify it for us.

Mr. Morales, are you performing actual physical "forensic" examinations on the items that you issue "Certificates Of Authenticity" for?

I would also like to ask Mr. Morales a few questions. Mr. Morales, as a “Forensic Investigator,” do you think you have a moral and professional obligation to question all of the rare vintage and historical cuts that Coach’s Corner Auctions sends to you to authenticate every month? Cut signatures that major auction houses can only dream about selling. Do you have a moral and professional obligation to question Coach’s Corner about all of the Babe Ruth, Christy Mathewson, Lou Gehrig, etc., autograph items that pass through your hands for authentication every four weeks? Did it ever cross your mind, Mr. Morales, where all of this rare vintage, autographed memorabilia originates from?

And finally, Mr. Morales, how does a “Forensic Investigator” who claims to be “Court-Approved,” using "State Of The Art Technology" not "forensically" discover that the ten signatures on those eight photos sold to Mr. Bassett were traced?

I see that Morales-authenticated "Beatles-signed" baseball is at a whopping $100 so far. Memory Lane just sold a Beatles-signed ball for well over $80,000.

Coach's Corner sold two Morales-authenticated "Marilyn Monroe and Joe DiMaggio signed" baseballs for $420 and $957 in their June auction. Heritage Auctions sold the only one certified by either PSA/DNA or JSA sold in 2006 for $192,000 (PSA/DNA).

That was an amazing auction for the Joe DiMaggio/Marilyn signed baseball that sold for $191, 200.

Not only is it "Mobster Month" over at Coach's Corner Auctions, but they are also selling cut signatures of the good guys. 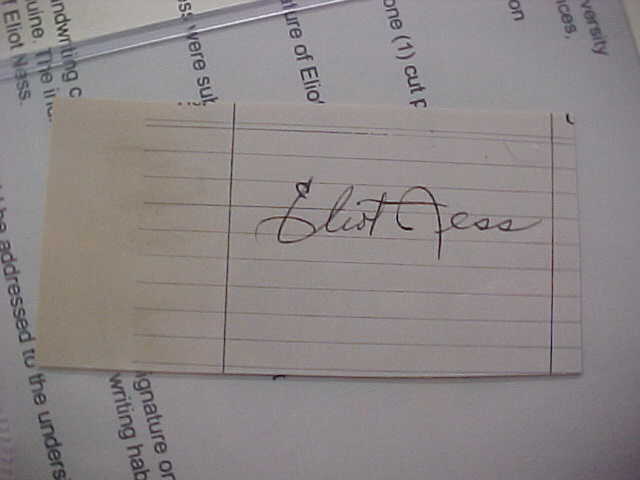 Can't thank you enough for posting this and letting the uninformed know just what a complete Maroon and Tra la la goon de A Christopher Moral Less really is. He makes the "Donald" Fryingpangianni look like a school girl for his crimes. A complete Idiot IN ALL RESPECTS if ever there was one.

He is as repulsive as any one human being can be and the more people speak out about the low life scum that he is, the better for the Autograph hobby in general.

Fuddjcal,  I can't thank you enough for your support all of these years.

How embarrassing is it for so-called "Forensic Investigator" not to determine that the Bela Lugosi, Boris Karloff, Lon Chaney and Elsa Lanchester signatures (a total of ten signatures) were all traced.

And then to also admit that you (Chris Morales) uses the "Autograph Collectors Handbook" as a source for exemplars.

When I spoke and exchanged emails with a number of real FDE's (Forensic Document Examiners) none of them even heard of the "Autograph Collectors Handbook."

A friend and fellow collector had to send  morales the REAL ORIGINAL LYNYRD SKYNYRD BAND SIGNATURES,i will cut morales a very very small piece of slack in his defense,if you are being shown FAKE SIGNATURES from the very beginning and these sigs that you go by then he sort of is a victim too by the forgers but once he has been shown THE REAL SIGNATURES. he should have admitted he was WRONG and DENOUNCED his previous findings