On September 9, 2011 the Pawn Stars reality show aired a segment in which they were offered a Bram Stoker signed "Dracula" book.

Corey (the same guy that purchased that ridiculously-funny Lou Gehrig signed jersey) was excited about purchasing the "Dracula" book signed by the author himself, Bram Stoker. 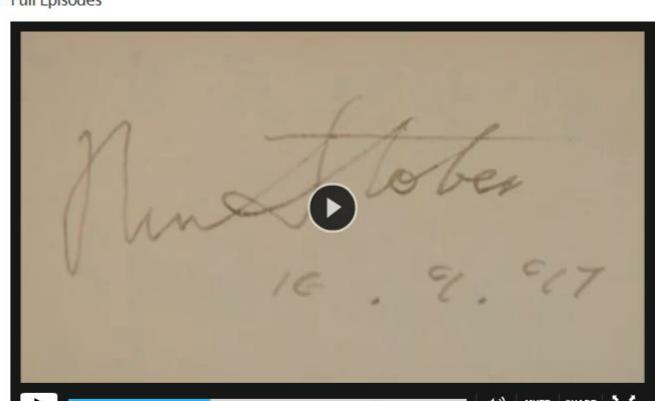 Now let's examine the above signature.  The first item I notice is the shaky "B" in "Bram."  The second red flag that hits me is the width of space between the vertical lines of the "B."

The overall spacing of the entire signature is way off and it is very slowly drawn.

The biggest red flag is the brown-colored ink.  This, in my opinion, should have brought up a red flag immediately to Mr. Max and his "forensic curiosity."  Brown ink is used to emulate "aged ink." Also, the angle of the "S" in "Stoker" is too vertical.

A quick review.  How is it possible that Drew Max, with his Hubble-sized magnifying glass, did not notice the shaky "B," the overall totally wrong spacing of the letters and the brown ink?

In my opinion, the Bram Stoker signed "Dracula" book sold on the Pawn Stars reality show is not authentic.

[Steve Cyrkin: Here's a side-by-side comparison of the Pawn Stars Bram Stoker and the Heritage Auction one uploaded below from February 2006:] 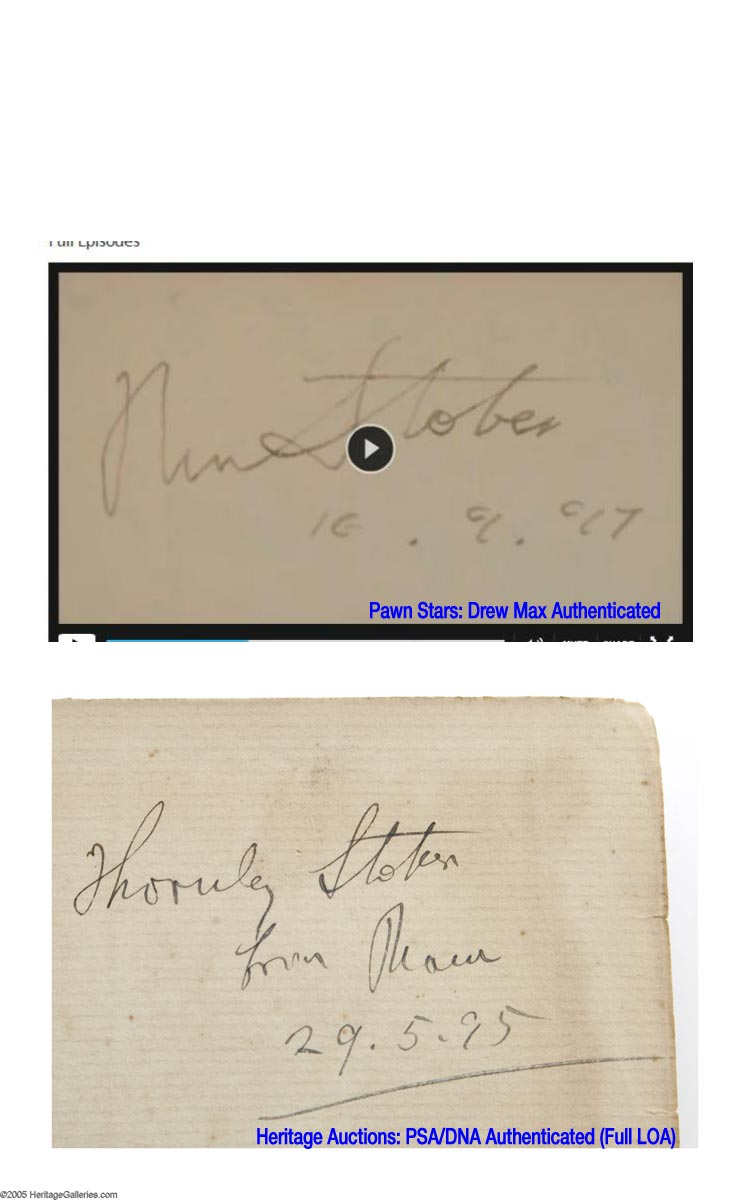 Comment by Robert Babb on September 18, 2011 at 5:22pm
They said that the book would have been worth more if it was a first edition instead of second but i do not know if that would have made that much diffrence price? I like watching pawn stars and other shows like this including american pickers but just  makes you wonder what is planted on these shows as real and are not?

Heritage Auctions sold a Bram Stoker-signed "Dracula" in February 2006 for $33,460. It was inscribed to his brother Thornly Stoker, in Thornly's full name. So even though he only signed it Bram, you see an example of how he wrote "Stoker". http://historical.ha.com/c/item.zx?saleNo=626&lotNo=25829 Comment by CEE GEE on September 18, 2011 at 6:04pm
Hey Chris...I did catch that episode on a rerun last week...not noticing it then but now come to think of it it does seam shakey...the only other example I ever seen was Steve's scan shown here...its a real shame...I wonder where that book is now....hmmmmmm...the best thing Autographed in my opinion I ever seen walk on to that show was if you recall a 1951 team signed ball with Joe.D and the Mick on it...sure the ball was beat to death but at least that was authentic...I remember the guy not selling...

Comment by Steve Cyrkin, Admin on September 18, 2011 at 7:18pm
Chris, I added a comparison of the Pawn Stars and Heritage Auctions Bram Stoker to the body of your blog.

Comment by terrier8HOF on September 19, 2011 at 4:17am
I saw the show and I always pay special attention to when Drew is involved.  It was hard not to notice the shakiness of the signature.  Especially under the hubbell telescope he uses. came across this example searching for what an authentic Bram Stoker auto should look like...this is a signed letter...not very neat but no shakes what so ever

I would love to hear from Drew Max.  I would like to know exactly why he proclaimed the Bram Stoker signed "Dracula" as "authentic?"

Comment by terrier8HOF on September 23, 2011 at 4:10am
did anyone see the Mel Blanc signed poster the Drew blessed on Pawn Stars recently?

Do you mean this Mel Blanc?