Today we are going to revisit the Sports Collectors Digest (SCD) May 2005 interview with Christopher L. Morales.

I will analyze excerpts from the interview without taking anything out of context.

SCD:  How long do you spend per item?

CM (Chris Morales):  That varies.  If you look at somebody like Babe Ruth, where I've seen a high volume, it wouldn't take as long because I know his characteristics.

If Chris Morales "knows Babe Ruth's signature characteristics," then why is he still passing, in my opinion, Babe Ruth forgeries like the ones below on a consistent basis for Coach's Corner?

How many hundreds of Babe Ruth signed baseballs/bats/jersey/cap items has Chris Morales "forensically examined" and passed for Coach's Corner and I have yet to see one that I would consider authentic.  Not one!!! How many dozens of Mickey Mantle/Roger Maris dual-signed baseballs has Chris Morales "forensically examined" and passed as genuine over the years. I have yet to see one that in my opinion is authentic. SCD:  Coach's Corner has a great deal of diversity, with submissions from all corners of collecting, entertainment, sports.  Does that create a challenge for you?

CM:  At times I’ve had to tell them there is stuff
I can’t take, I can’t find anything on it. And I’ve had
stuff that it was difficult to find anything on, as
opposed to just sports and you get a bunch of Ty Cobb
and Babe Ruth that’s easier. They come up with more
stuff that’s difficult to do, from the entertainment
field, and not so much famous or old stuff, but new
stuff, like a star in a sitcom. They get a signed picture,
and in some cases, you can find exemplars, and in
others, there’s no practical way to come up with something.

Mr. Morales, what is "The stuff that you can't take" when you're consistently "forensically" passing autographs of Mike Kelly, Christy Mathewson, Eddie Plank, Ed Delahanty, etc? 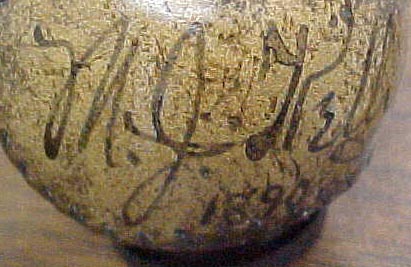 And, Mr. Morales, where did you find numerous exemplars to pass the below Bonnie Parker cut sig that sold for a whopping $145.00. SCD:  Would you say that you pass a greater percentage
than some of the autograph examiners out there?

CM:  I don’t know about that. As far as passing more
stuff, I have failed stuff from Coach’s Corner. I don’t
have all that many clients and I tend to work for people
who were more careful in acquiring their items in the
first place, so there’s a higher passing percentage than
there would be if I had a whole lot more clients and more
volume.

So Mr. Morales says "I don’t have all that many clients and I tend to work for people who were more careful in acquiring their items in the first place."

So is Mr. Morales saying that Coach's Corner "is very careful about the items that are consigned to them?"  What exactly does Mr. Morales mean by that?  Does he know who the Coach's Corner consignors are?  How careful was Coach's Corner when they agreed to accept the below item on consignment and you passed it as genuine?

What's also interesting is that Morales claims to have "failed stuff from Coach's Corner."  If you look at the autographs he passes for Coach's Corner, is it really possible that he's failing anything?  I would love to see his rejection folder.  My main question to Christopher Morales is "Are you physically, forensically examining the autographs that bear your COA?" Below is a comment from Mr. Morales from the SCD interview:

Are things going to get by people? Absolutely, we’re humans and that’s going to happen. But hopefully, with the experience and training that we have, the majority of that isn’t going to get by. But if a forger is truly an artist, you’re basically pitting expert against expert.

That's a pretty amazing statement, Mr. Morales.  What kind of "artist" do you think "painted" the below Orville & Wilbur letter, which in my opinion, is one of the silliest-looking forgeries.  How did Orville forget the "E" in his name?  The pen pressure is identical for both names, etc, etc.  Are you telling the us that you were unable to determine that the below two signatures were penned by one hand?  Because in my opinion, both signatures were penned by one hand. 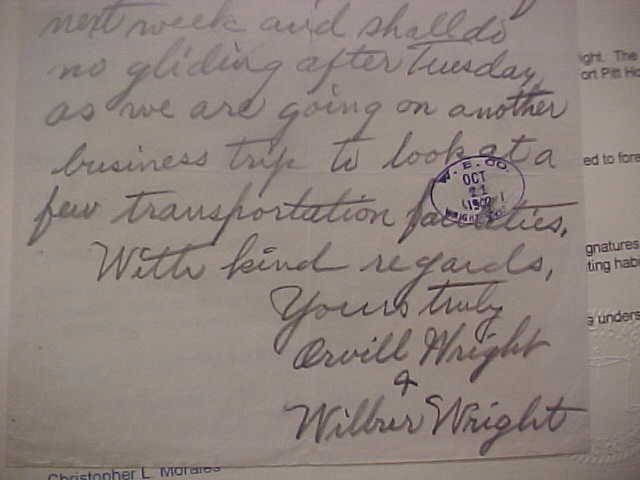 Mr. Morales, did the below "artists" of the two items fool you, too?  There must be a ton of "great artists" who have fooled you over the years, Mr. Morales. The SCD interview with Christopher Morales was six years ago.  Not much has changed since then,  except for the fact that Christopher Morales has joined Donald Frangipani on Ebay's "Banned COA" list and he now "forensically examines" autographs for yet another auction house.  The interesting thing about the new (two years now I believe) auction house that he works for, is that the only "authenticators" they use are Morales, Ted Taylor, Burczyk (who never looked at anything) and Drew Max.

Mr. Morales, you have "forensically" passed dozens of Babe Ruth and Lou Gehrig autographed pants and jersey items.   These are items that are never seen being auctioned off in the major auction houses but yet Coach's Corner auctions those types of rare items every four weeks.  The one below sold for a whopping $488.00.  Why is it, Mr. Morales, that they don't sell for 5k, 10K or even more?  I do know collectors who scan Coach's Corner auctions every month hoping to get "lucky."  If I thought for one second that the below Lou Gehrig signed jersey was authentic,  don't you think I would do all I could to win it, send it to both PSA and JSA, and then consign it to a major auction house and flip it for a huge profit.  But that doesn't occur, does it, Mr. Morales.  Of the dozens of Babe Ruth and Lou Gehrig signed pants and uniform items that have been sold by Coach's Corner, and "forensically" passed by you as genuine, I have yet to see one listed at a major auction house.  Ever thought about that, Mr. Morales? 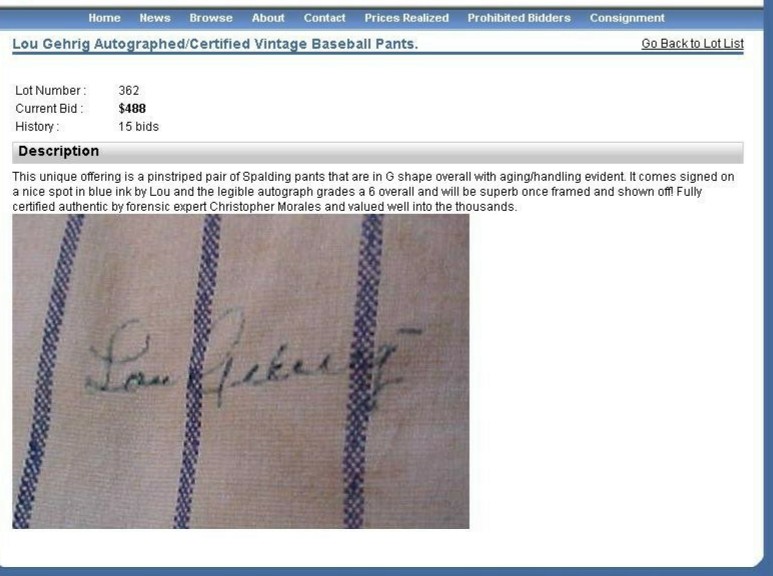 One more thing, Mr. Morales.  Did it ever occur to you to question the hundreds (thousands?) of rare items that have crossed your desk over the years to "forensically" examine?  The Christy Mathewson signed baseballs and cut sigs; the Eddie Plank and Ed Delahanty cut sigs;  the Babe Ruth and Lou Gehrig signed uniforms, baseballs and bats;  the Walter Johnson, Cy Young and Ty Cobb baseballs; the 1919 White Sox team-signed baseballs; an infinite number of historical signatures of George Washington and Abraham Lincoln; the Geronimo, General George Custer and Daniel Boone cut signatures.  Have you ever asked Lee Trythall and Scott Malack of Coach's Corner Auctions where all of this "rare stuff" comes from and "How is all of this possible?" Let me end this thread by writing that I have every right as a hobbyist and collector to question Christopher L. Morales and his "forensic" autograph determinations.  He is being compensated to pass autographs (thousands) that I, for one, in my opinion, are at best questionable and usually horrific.  I have been questioning his body of work for years since I discovered his first work at a website called SignatureDreams.

The full SCD 2005 May/June Interview With Christopher Morales will be published on this site shortly.

Bingo!  To me, this is why CM would never want to submit to a deposition, much less offer himself to direct questioning in court. Let's hope that he does though.

Comment by CEE GEE on September 29, 2011 at 5:16pm
Wow Chris...Bravo...Standing Ovation for this piece....what a great read...I remember when you did your video on the Bonnie autograph...it is quite funny how autographed items like Babe Ruth keep surfacing like they were signed last night when Babe has not signed anything for over 60 years....you truly are an inspiration for myself and all True Collectors that want to get this type of news out in the public....I hope every member on this site reads this piece....hats off to you bro...Great Work !!!!

You're right, it's amazing how Coach's Corner seems to have an infinite inventory of Babe Ruth, Lou Gehrig, Christy Mathewson, Walter Johnson, etc.

Comment by CEE GEE on September 30, 2011 at 5:18am
Misspelled autos are always a good sign of fakes....your right that the alleged  Wright brothers piece "Orville" spelled his name wrong...that's hilarious...and that Mantle Maris piece screams FAKE AS WELL !!!!..by the way Chris...on an unrelated note did you see Drew Max authenticate that Orville Wright lot of autographs on Pawn Stars ?...I never seen an Orville Wright auto prior to that show but the darkest auto looked like an auto pen to me...I don't know the ink placement and the extreme darkness of the ink seamed suspect to me...I did a forum about it after it aired but it seemed to get any attention...check it out

Misspelled autographs are rather a strong tipoff, don't ya think?

Orvill apparently was one of those who could not spell his name :).

CC seems to have had more than one of those.

And lets not forget the biggest of all time the $30,000 D-e-l-e-h-a-n-t-y (real spelling is Delahanty, a baseball HOFer) ALS which was authenticated by the two biggest authenticators out there who did not even note the misspelling in their certs.

I may be wrong but Mr Morales is involved in more than one lawsuit now, as a plaintiff, and it is possible that he has already been deposed.

We should not hold our breath waiting for a response. :-)

Isn't that the one that indicated he collaborated with Frangipani?

DB, Morales' exact quote from that SCD interview is:

SCD: What’s your “day job”?
CM: I’ve been dealing with Don for more than 10
years, and most of it is on the criminal side, working
cases for attorneys. Then I do the memorabilia and
historical (evaluations) and security-related
things. With Don, the company is Frangipani
and Morales, and for everything else
I do, it’s just my name. Most of what I do is
on referral.