Chris Paul Gets the Best Birthday Gift Ever -- An Autographed Photo! It’s always fun when stars talk about being thrilled by an autograph they received. Usually it’ll be a baseball player acquiring a Jackie Robinson or Babe Ruth signed ball. It could be a rookie NBA player having Kobe Bryant sign a pair of Nikes. It’s a bit more baffling when Clippers star Chris Paul, who turned 29 last month, tweeted about a gift he got. He wrote, “Easily one of the best Bday gifts of my 29 years on this Earth!!!” He then called Thiessen his “first love.”

He apparently watched the show Saved by the Bell in the ‘90s and had a huge crush on Kelly Kapowski (Thiessen).

She’s 40 now, and has been on the USA network show White Collar. And she had time to send him the photo after hearing he was a fan. She wrote,“Chris, Happy Birthday my dear,” and signed her name with a heart. 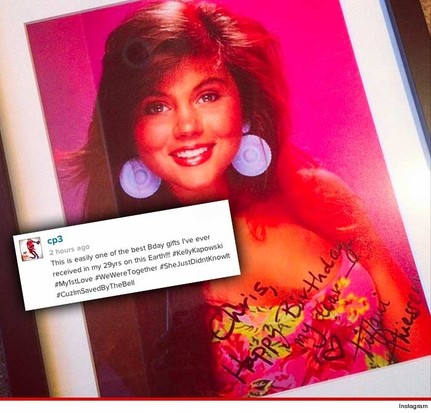 Later in the day Thiessen reposted the photo adding, “I’m blushing. Hope you have an amazing birthday.”

I know if I had the chance to get an autographed picture from my first crush – well, I’m not sure if it would be the signed Farrah Fawcett poster, or Lynda Carter as Wonder Woman. It’s just weird that Paul had a crush on somebody from a bad TV show. There is absolutely no truth to the rumor that team owner Donald Sterling was heard yelling in the locker room, “If you want a picture of Slater, fine. A picture of Elizabeth Berkley, I would even ‘screech’ with delight seeing that. I just don’t want to hear about a photo of Lark Voorhies hanging in your locker. Not when you’re on my team.”

At least it won’t be Sterling’s team for long, and it’s nice that Paul had a great birthday. Maybe Mario Lopez will hook him up with a picture next year.

Brilliant as always. Lindsay Wagner would be nice if she can prove she really is a bionic woman!

Kim Novak is gorgeous! I'd take her from Vertigo!

Dan Gregory -- Good call on Lindsay, but there are two problems I have with that choice. My one child is named Lindsay, and...do you really want a bionic woman? Let's think about this. She asks if you took the trash out, and you say "Come on! You're the one with all the strength." And she throws your ass out (literally)...and you go flying down the street. Nothing good could come from her having this type of strength ;-)

I don't know if you can really call "Saved By the Bell," which was a spinoff from Disney's "Good Morning Miss Bliss," a bad show. It was written for a specific demographic (tweens and young teens), and packaged comedy into issues that actually affected that age group. Given who it was targeted at, I think it was a pretty good show, and I completely understand Chris Paul's reaction. :P

Dane, you actually make a great point. When a TV show is geared towards a different demographic, you're right. It makes no sense to grade it based on what an adult thinks of it. It would like a critic saying the Barney the Dinosaur movie had no story arch, and the characters were one-dimensional, and that it was an awful film!!! hahahahahah.  I guess I'm just of the belief that -- you can do a show for a specific demographic, and still make it entertaining for everyone. Certain animated pictures like Finding Nemo, Toy Story, Up....kids and adults love them, right? But anyway...as an autograph collector, I just gotta know -- would he have rather had the photo he got, or a group photo? I mean, I'd surely prefer a team photo, as opposed to just a head shot of Chris Paul signed!