My Days With Tony Gwynn 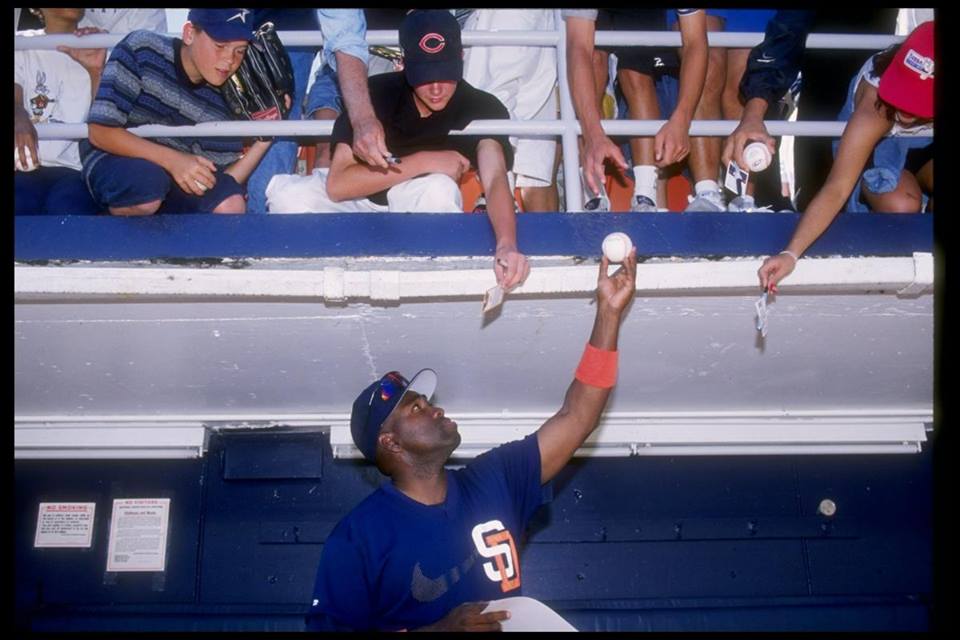 Tony Gwynn and Kasey Kasem had something in common. Both dealt with lots of hits.

I worked in radio a long time, but never met Kasem. I met Gwynn, who passed away the day after Kasem, on several occasions. He was always a class act.

One bit I did on the radio was calling the San Diego Padres and trying to convince them to let me throw out the first pitch. After being told it would cost a $35,000 donation, they suggested that I “sing the National Anthem.” I asked how much that would cost. Surprisingly, it was free. They booked the date, and it was set. Only problem was, I can’t sing. So we invited a few listeners to join me. Two girls and a guy, and as per the teams request, we recorded it first. That way, if anybody forgot the words (like comedian Roseanne Barr did in front of a Padres crowd), it would still play and sound great.

As we walked off the field, Gwynn shook the hands of all of us and told us how great we sounded. The two girls asked for autographs, and he signed their caps. Him signing autographs for fans was nothing new. I had seen him stand there for hours signing. The only time I ever saw him refuse a person, was a guy that had 8 items signed and was pushing his way in front of others. Gwynn snapped, “I’ve had enough. I’ve signed so many things for you and you’re not giving others a chance, so I’m leaving.”

A police officer that’s a friend of mine told me about how he and his partner pulled into a gas station. They saw a brown Mercedes with a “Pads 19” license plate. Sure enough, it was the greatest Padre in history. His partner ran over and said, “Give me your autograph.”

Gwynn responded, “A ‘please’ would be nice,” before signing.

For those that aren’t familiar with his stats, Tony Gwynn is a Hall of Famer that spent 20 years with the Padres, won a number of Gold Gloves, and was an All-Star most years. He also led the league in hitting many times. He’s arguably the best hitter in baseball (some would say that honor goes to another late San Diegan – Ted Williams).

Playing 20 years in one city isn’t the only thing that made him legendary here. He played basketball for the San Diego State Aztecs and would eventually become their baseball coach after his career ended.

I remember at one luncheon with a few media types, we were each given 15 minutes to interview Gwynn. Afterwards, we could take a photo with him, which they turned into an 8 x 10 before you left. They said, “Mr. Gwynn will sign the photo before you leave.”

At that time I was doing sports for the morning show, and using the name “Stryker Maguire” (long story). He laughed for two minutes when he heard my name, before saying “That’s a goofy name.”

Perhaps he just didn’t like anything with the word “strike” in it. This is a guy that didn’t strike out often.

When I worked at McDonald’s in high school, our owner arranged to have Gwynn work there all morning. I’m not sure what kind of promotion it was, but it was a blast working with him, and periodically throwing baseball cards on the counter for him to sign. A few employees wanted McDonald’s cups signed. They thought that would be cooler. I think it’s cool to just tell people, “Yeah, I used to work at McDonald’s with Tony Gwynn.”

When I coached youth basketball teams in the early ‘90s, one team had Padres players kids. Gary Templeton and Gwynn were always there in the stands, and although they would’ve probably preferred sitting there as proud parents, they always smiled and signed autographs when things were put in front of them. Even if that meant they were missing their kids play on the court.

One of the kids on my basketball team was in the Cub Scouts and needed a broadcasting or journalism badge. A parent asked if I would take their troop into the radio station for a tour. A neighbor of one of the boys wanted to come along. He was a cute Asian kid that wanted to pursue a career in journalism. I got a call from his mother a week later. It turns out his father had died a few months earlier. Now their school was having a “career day” and dads had to come and talk about their jobs. Since his dad wasn’t around, and he wanted to pursue a broadcasting career, she wondered if I would be the adult he brought in. I was honored.

I showed up at the school and spoke to the class about my career. When I asked if anybody had any questions, one kid raised his hand and said, “Have you ever met Tony Gwynn?”

I told him about the few times I had interviewed him and the rest of the class raised their hands. They wanted to know other things about Gwynn. Did I ever get an autograph from him? Did I hang out with him? Could I bring him to their school tomorrow? 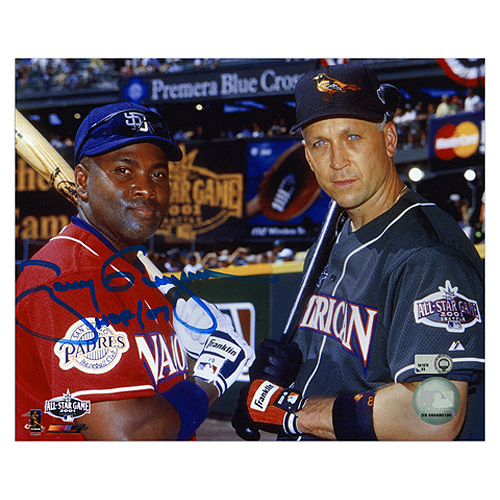 A few weeks later I ran into Gwynn and told him all this. He laughed. He then gave me an autographed bat to give the boy. It was a very classy move.

I had a friend named Vince that used to put stages together at local concert venues. Gwynn was his favorite player, and at one autograph signing, Vince brought him a box of fruit from the farm his family ran. Gwynn thanked him, and at the next autograph signing, he was given more fruit. Gwynn said he’d sign anything the guy wanted, to which Vince said, “You already gave me your autograph once. That’s enough for me. You’re my favorite player, though. I just wanted to see you again.”

They became friends and this led to Vince getting a job opening fan mail and doing other things for Gwynn. The stories he told me of Gwynn and the classy things he did over the years, was mind blowing. For a professional athlete, that is one of the best in the sport, to treat everyone politely (even when they’re all pestering you for photos and autographs), it’s truly amazing.

Vince passed away a few years ago from complications related to diabetes. I like to think he’s up there with Gwynn now, playing catch. While down here on Earth, we realize Tom Hanks was wrong. There is crying in baseball. At last today there is.

Otstanding Josh, he seems like a real legend and someone who really cared about his fans

Comment by michael bartow on June 18, 2014 at 8:32pm
sad to see a legend so young pass away. from what you have mentioned about the man he seemed like a humble person. That is what I remember when I was younger when baseball players would do local baseball card shows and do a signing for $20-25 and that allowed you to get 1 item signed be it a photo, ball or bat. I remember getting Keith hernandez, doc, strawberry and the late gary carter at a local baseball card shop in my area of NY. sometimes they would just get done playing a game earlier get into a car and get up here for a autograph session. All I can say those days are gone. I have seen where now if you want a autograph its this price for this item, another price for another item even a small price for you to add HOF to the item. seems like players in this day and age only care about the money they will get from a autograph session and not about the fan who really likes that person.

So, as you can imagine, the letters keep coming in to all the local newspapers in San Diego. One guy talked about how he became friends with Gwynn. He owned some big company and at one point he asked Gwynn to speak to the 400 employees. He agreed to do it. The man was shocked when ALL 400 PEOPLE, brought items for Tony to sign. He was apologetic to Gwynn and told him he didn't have to sign. Tony laughed and said, "Don't worry about it." He stood there for 3 hours, signing every item, and taking photos with each person. Another letter came in from a guy that worked with Gwynn. He said Tony was in his office (while coaching at SDSU), filled the box with signed jerseys, balls, photos. He was heading over to the new ball park downtown. Turns out...he met a couple when he was doing an autograph signing in another state. He invited them down and said, "I'll give you a tour of the new park." They came down, but it was on a day he couldn't give them a tour. They were getting a tour with other tourists and he showed up, gave the box to this couple -- who started crying with happiness. He apologized he couldn't make the tour and said he was super busy. The guy that wrote the letter said...most athletes wouldn't have even cared. You tell people stuff all the time, and if they call you on it -- you say you're busy. Not Tony, though. What a class guy.

I wrote to him several years ago c/o San Diego State University and never heard back from him. Didn't make me think less of him, though. He always seemed like a nice guy, and I knew he got flooded with mail, so it was no biggie. Rick Camp, a former Braves pitcher who died last year, said that Tony was the toughest hitter he ever faced. Hit .350 against Rick! But then again, he hit .350 against everybody. :) What a player.

Hey Jeffery -- I interviewed Brian Sipe once. I wrote the story up here somewhere. Find it. He told two of the best autograph stories you'll ever, ever read. Guaranteed. Anyway, he was a QB for the Browns. Won the MVP one year. He's a local guy here in SD. A legend. Played at SDSU. IN fact, played in the first little league world series as a tyke. He told me when he started coaching high school football, he'd get 3 or 4 autographs a day in the mail. At first he'd sign and return them, but it got to the point where he'd set them down on his desk and figured he'd get to them later ... and then he'd get busy. When they started piling up, he finally just said he can't keep doing it. He's there to work, coach, etc. He had no clue how everyone was getting his address or finding out where he coached, but it wasn't working for him, and trying to get the job done. And he was not a Tony Gwynn (hall of fame baseball player), so just imagine the volume of mail Gwynn got!!!