A few of my friends did report a few autograph things to me. One said if you wanted Hulk Hogan’s autograph and a picture, it would cost you $80. Another friend told me Linda Blair was signing autographs for four hours. You could get one free on the program, but any movie memorabilia (The Exorcist, Roller Boogie), that would cost you a pretty penny. And she might barf on it.

Judah Friedlander (30 Rock) was there. He’s always funny and gracious with autograph signers.

I saw a photo of The Simpson’s Matt Groening signing and drawing pictures for fans. He’s there every year, but you never know when he’ll pop over to The Simpson’s booth.

Daniel Radcliff was walking all over the place and was friendly to everyone that approached, although one friend told me they just saw people taking pictures with him, not getting autographs.

Members of the latest Hunger Games were signing autographs, but none of young actors were anybody I had heard of.

The big upcoming star Shailene Woodley (The Fault in Our Stars) and her Divergent co-star Theo James were signing autographs for about an hour. 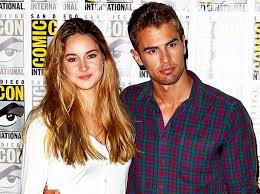 So during the week I missed Comic Con, but I never miss the late night talk shows. I love Conan, Kimmel, and Letterman (although he’s not as funny as he used to be).

Jimmy Kimmel did something with the band 5 Seconds of Summer. They have a huge following among teenage girls, and he had a reporter ask girls if they wanted to kiss various band members via a TV screen. At the last second, one of the band members who was talking to them, would turn into a weird looking person that the girl was actually kissing. They’d get grossed out and scream. It was kind of funny, but a lot better when we see the very end, the real band members would come out from the back and the girls would be star-struck. It was like the clips you saw of the girls screaming when The Beatles took the stage at Ed Sullivan. Kimmel joked about how the girls ended up happy getting all their selfie photos and autographs. It’s always nice when a fan gets an autograph and…they can record the show that night and show friends how they actually met their favorite band.

The funnier autograph story happened on Conan O’Brien. He had comedy legend Carl Reiner, who was promoting his latest book. Reiner said he talked to the publisher about giving everyone in the audience a copy of the book, but they said “Are you crazy? That would cost us a fortune!” As the crowd laughed he went on to say that he did get two copies of the book that he could give away (more laughter). There was more laughter and some applause as he added something rather interesting. He explained how he had autographed every single page, and the audience was to pass the book around, rip out a page, and they’d get one page of the book with an autograph. He said, “If you’re lucky, you’ll get a page with a picture.”

Now that would be a cool item to have in your autograph collection.

Carl Reiner's approach is quite original. If I wore a hat, I would tip it to this --

Love that from Carl Reiner, so different and brilliant

I would be that guy in the audience saying to people "Uh...I'll buy that page from you for $5." And...people that don't care about autographs or Carl Reiner, would gladly do it!

not only is he a comedy legend but is awesome to his fans as well as his son the meathead rob reiner! awesome articles josh!