I've never been the biggest Def Leppard fan. Well, scratch that. I was in 8th grade when their big album Pyromania came out. My older brother bought me the album for Christmas and I loved it. It had the hits "Foolin'""Too Late For Love" and "Rock of Ages", as well as "Photograph." (my favorite song wasn't one of the hits, but "Rock Rock (Till You Drop).
"Things were helped along by MTV being a TV channel that actually showed music videos.
At that time, I was into autographs, but didn't know how to properly go about getting them. When you're that age, you're at the mercy of getting rides from your parents. I had to beg them to let me stay 15 minutes longer in the parking lot after San Diego Clippers games to get players autographs.
Def Leppard has always been great with fans and autographs. One time, at the radio station I was working at, singer Joe Elliot came in for an interview. I was years passed the time of caring about that band, so I didn't get his signature. He did sign for a lot of the employees of the station, as well as a handful of fans that showed up.
About a year later, I heard him on another radio station, and to my surprise, he was talking about autographs. He said the band has always been good about signing autographs, but they were going to change their philosophy on it. Usually when you hear that, you know what's coming next. They're tired of fans coming up to them at the bathroom or at restaurants, so they're going to refuse autographs. In fact, just the other day, Justin Beiber made this proclamation.
He was talking about how crazy some fans can be. One woman had written "I love Joe Elliot" 25,000 and sent it to him. He met her before a show and said the meeting went well. At the next show she was at, she was rude that he didn't have time to talk more. He then talked about how fans in Japan are fanatical, but they're very polite. In America, they can get crazy. Again, I thought this was all a lead-up to him saying they won't be signing autographs anymore. Instead, what he said is, "If anybody approaches us for autographs in the future, we will sign, but we are going to charge $5. All of that money, 100%, is going to charity."
I forgot which charity, but I thought it was a brilliant thing to do. That's such a small amount, any fan would pay it, and they're donating to a good cause.
Years later, I ran into the drummer (Rick Allen) at the NAMM show in Los Angeles (National Association of Music Merchants, where lots of famous musicians end up going for the convention). For those that don't know, the drummer, lost an arm in a car accident. He eventually learned how to play drums with just one arm. He was nice to the fans that approached him, signing autographs and taking photos. He was evening giving a demonstration to one fan on how he learned to play again.
The latest Def Leppard story I just heard today, and it was again a classy move by the band. In Arkansas, at the Arkansas School for the Deaf, they're football team has been calling themselves the "Deaf Leopards." A clever name. Well, they had created a petition for the band Def Leppard to come take a photo in front of the football teams scoreboard. The petition got 1,500 signatures online, and it finally got the attention of the band. The band didn't come to the schools football field, but they invited members of the team to come backstage for a photo, since they were in town for a concert in Little Rock.
The students brought a replica of their scoreboard, and the band took a photo in front of that.
I initially thought the school was clever to take the name "Deaf Leopards" but...the schools mascot had been the Leopards since 1941, decades before the band took their name. Singer Joe Elliot came up with the name while writing fictional band reviews for an English class (and it reminded him of Led Zeppelin).
I'm not sure if the band is still signing autographs for $5, but either way, this is one classy classic rock band. 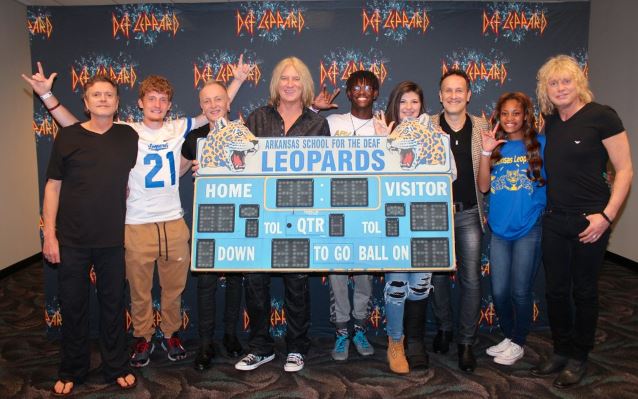 Comment by Xwiesy on May 14, 2016 at 1:30pm
Did their meet and greet and talked to Joe about the Everly Brothers. What a thrill.

Comment by Barry S on May 14, 2016 at 1:47pm
I've always been a big fan, they are a class act. I recently found this out. I saw them last night in Greensboro, their rescheduled show. I was also going to see them a couple of months ago on vacation in Orlando. Was also looking forward to seeing my friend from AML that works security there. When we got to the Amway Center they said the show had been canceled, Joe Elliot was sick. We went down the street and saw Colin Hay. While there my wife texts me and says guess who the kids and I are talking to at the hotel lounge? Def Leppard. My daughter said to them, my dad is a big fan of yours. Rick Allen said, where is he? She said your concert. He smiled and opoligized. My wife said they talked for a little, never asked for an autograph or a picture, left them alone. A little later Rick A. Rick S. and their Mgr. and his wife brought candy to the kids and sat and talked for 45 min. Said they would send a signed picture to the kids, got it last week.

Awesome stories, guys! Thanks for your comments, as always.

Yeah, in high school, I thought the Union Jack was cool. It seemed a few of the British bands sported that, so I dug it. I never got into the Iron Maiden character they used, but once a music magazine said that Iron Maidens manager claimed they actually made more money on that Eddie Character on shirts, then they did selling albums. So yeah...always weird if a band doesn't come up with a good logo or tour shirt!

I love Def Lep!  I saw them on the first leg of the Hysteria tour, before they blew up with Pour Some Sugar On Me.  Then they came back in the summer of '88 and they were one of the biggest bands on the planet.  I don't know why they don't sign at their paid meet and greet.

That was a great read, Josh.

I just thought of a Def Leppard story. I was dating a girl when I was 20, and she hated The Doors (my favorite band). She loved Def Lep, a band I didn't care much for. So, she was watching the video for "Pour Some Sugar on Me" (a song that is really much better when a stripper is dancing to it, but I digress). I went to the bathroom, and while in there, I put an arm down my shirt. I came out of the bathroom, looking like I only had one arm. I took a pen out of my pocket and said, "Hey Nicola...here's my impersonation of the Def Leppard drummer."

I started drumming with that one hand. Oh man, she was pretty furious.