Ending the year on a good note

I enjoy sharing my experiences with this blog.  Hopefully, if these artists come to your town you will have the same success as me or in some cases, better success!  I managed to attend a few more concerts to end the year and ended up getting 4 out of 5.

First of all, Carl Palmer from ELP and Asia played a solo gig in Akron.  After the show, he headed straight to the merch table to sign and meet fans.  He had a variety of merch available including posters, drum heads, drum sticks and vinyl.  I decided to bring 2 Asia albums that I had (1 had Howe and Downs, the other was mint in the wrapper)  I decided to also buy a set of drum sticks as well (I used to be a drummer).  He was very friendly and signed both sticks and both albums and also took a picture with me.  I later heard that a few people brought albums to be signed, but Carl refused because nothing was bought from his table.  So if you go see Carl Palmer, buy something from his table and he may sign your other items as well. 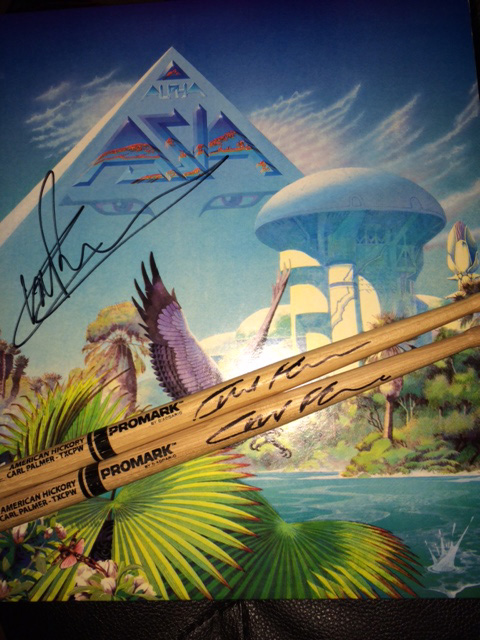 Next up was Brian Setzer.  He played his Christmas show right before Thanksgiving and what a show it was.  Probably on my top 10 list and I've gone to over 50 shows this year.  He actually signed a few after the show from the stage, but then took off.  A few fans made their way to the bus to see if he would sign.  Brian was one of the first one's on the bus.  Each band member came out and talked with the few fans that were there.  His tour manager came out and collected our things and brought them on the bus for Brian to sign.  After a few minutes, all of our items were returned.  So even though I didn't meet him, I was happy to get my Stray Cats lp and my mini guitar signed (even though he signed it on the back!) Kenny Rogers also played a Christmas show at the Hard Rock right after Thanksgiving.  After the show, there were two of us waiting for him and we asked him to sign.  He said I have to get to the bus, as he took very small steps.  He then had a security guard come over to us and said "One each" which was fine because I only had "The Gambler" album.  A few minutes later he returned with both of our albums signed- the only bad thing was my friends silver sharpie didn't work so well because of the cold.  The graph is just a little light. Dan Auerbach of the Black Keys has a new band called The Arcs.  The local boy played the Akron Civic Theater and put on a good show.  Thinking since the "big star" had a homecoming, he might actually take care of his fans.  WRONG!  After waiting close to 2 hours in the cold, Dan eventually came out and made a B-line right for his bus, ignoring the 6 fans that were waiting.  A few of his band mates came over to us and signed and took pictures, I managed to get the set list from the sound board guy and had the two drummers sign that.  Not a total blow off, but not the guy we all wanted. 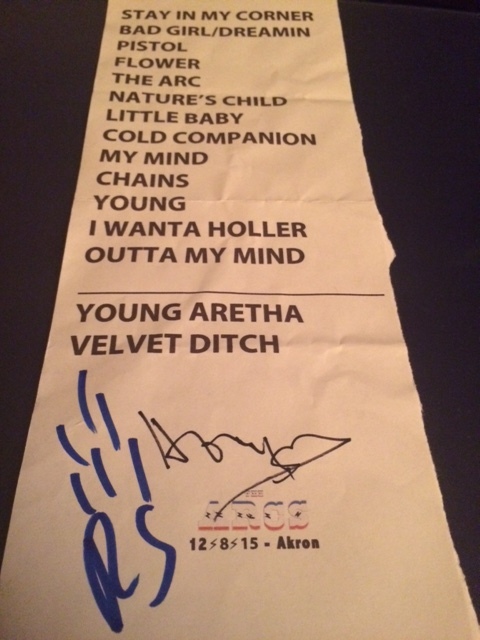 Finally, Rock and Roll Hall of Famer, Felix Cavaliere from the Rascals played in Kent.  What a performance from a 72 year old!  You need to check out his show!  Afterwards, he came right out to the merch table and signed for everyone.  Nothing needed to be bought, and he was more than happy to sign and take pictures with fans.  Of course, I brought my HOF poster with me. 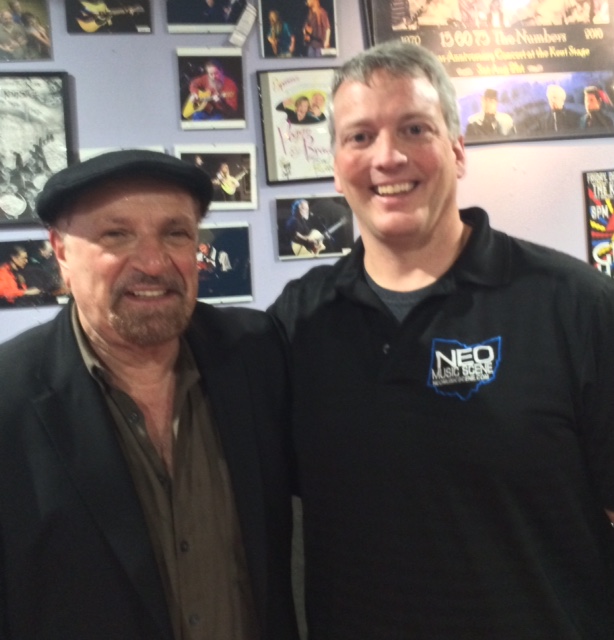 Comment by Adam Halloran on December 16, 2015 at 3:51pm
Once again another great blog! Coach say you got Paul McCartney on your poster would you stop taking it out in fear of it getting ruined or would you just keep going with it?

If I had the chance to get Sir Paul, I would single him out on something special.  However, I get what you mean.  When do I stop?  Well, I have 28 different Hall of Famers on there (it should be 31 had the 3 members of Blondie signed the actual poster instead of the plastic sleeve!) and I believe there is room for a few more, maybe up 35 total would make it a nice piece without it looking too messy.

If I think there is potential for something bad to happen to it, I won't take it out.  For instance, I met Mary Wilson outside of her hotel and she signed for everyone but it was very windy.  I didn't want to risk it so I had her sign something else instead.

I do love the reactions that some of the artists say when they see it.  Martha Reeves actually said that she was going to get one made and have all of her friends sign it for her!  Can you imagine the names on that??!!  John Oates said "Wow, that's nice!" and Chuck D said "That's cool, I'm not going to F*** that up!"

What do you guys think?  Should I add a few more, or call it a day and frame it up?  Also, anyone have any idea what the value of this would be? 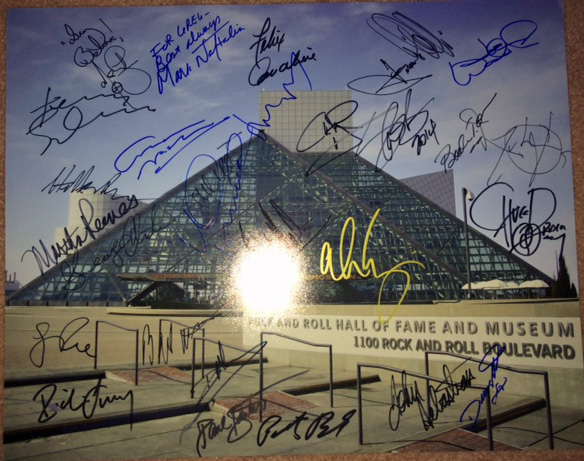 Comment by Adam Halloran on December 16, 2015 at 4:49pm
It is really a one of a kind piece! If you do retire it I would get another hall of fame poster and continue on. I just get anxiety for you thinking what if something happens to it lol. Still adding on to this piece some more would be cool.

Hey Coach! I would still bring it out and maybe make your wife or somebody be a helper, if its not in a controllable situation I wouldn't attempt to get it signed. Congrats on your latest conquests! If you have any extra Felix Cavilliere let me know!

Great, great blog. What a fun read. Also...be wary of bringing the poster out for another reason. Many times, the stars feel that you're doing that to sell it. Some appreciate it, look at names, and are amazed. They're fans, too. Others just think you're a dealer. My friend has that all the time with posters and guitars with multiple signatures.

Carl Palmer -- he signed one item for me after an ASIA show a few years ago. The singer blew us off (jerk!). Also, I've ALWAYS told people -- if they are at the merch booth and you have two or more items...buy their damn product! It's how they make money, and look at the difference it makes. You got both sticks and albums signed. Not sure why more people don't use common sense.

As a HUGE fan of The Black Keys -- I was the only person at a soundcheck and got them to both sign an album and CD for me, but both of them, were jerks about it. I even had a Cincinnati Reds shirt on, hoping they'd appreciate that (I'm in San Diego). At least they signed.

Great blog Coach! I would have thought you'd be saying Kenny Rogers is the tough one at least that's what I've been told by my friends who have tried for him here. I have also heard the same thing about Carl Palmer glad to hear he signs at his merchandise table if you buy something. The poster is priceless and if you are happy with it I'd retire it and start another and Josh is right celebrities will accuse you of selling a lot of the times if they see something like that. I say it's priceless because some of those sigs will never happen again so I'd frame it.

Thanks guys!  A friend of mine waited before The Arcs show and Dan came out with his parents after sound check and signed 1 each for the two guys that were there.  He bypassed the Black Keys albums and only signed The Arcs lp's that they had.  It's amazing that a local guy wouldn't be more willing to sign for fans from his home town.

My wife started teaching at Firestone during Dan's senior year.  She doesn't really remember him but she does remember Patrick Carney (Black Keys drummer).  She said that he was a total goof ball who would run in the hall, carrying all of his books then spill them all over the place so he would be late for class.  She said he did that all the time.

I'm set to shoot Eric Burdon in Feb. so I may try for him on the poster.  I heard he's tough, but he's playing the same place as Felix Cavaliere and I've had some success at that venue.  Other than that, unless it's a perfect situation weather wise, it's staying home.

As a big ELP fan, that is a nice story about Carl.